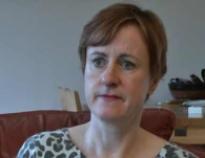 Age at interview: 50
Brief Outline: Ciaran has Down’s syndrome which means he cannot explain to his parents when he feels unwell. He was also diagnosed with Duchenne’s muscular dystrophy last year. He doesn’t like to swallow medicine, so his parents usually give it to him through a PEG (a ‘percutaneous endoscopic gastrostomy’ tube which goes directly into the stomach), or as a repository. Ciaran seems to catch things more easily than others. Alongside the usual coughs and colds, Ciaran had double pneumonia last year, which made him ill for about 6 weeks. Ciaran’s parents now have powdered antibiotics so they are able to treat Ciaran more quickly if he develops serious flu-like symptoms.
Background: Susan lives with her husband and son, Ciaran, who is ten. She works part-time as a firearms licensing officer. She is White Irish.

Ciaran has Down’s Syndrome and was diagnosed with Duchenne’s (a rare form of muscular dystrophy) at the age of 8, which his mum Susan, says was a bit of a shock. Ciaran has had major hip surgery which led him to lose a lot of weight and he now uses a wheelchair. Susan says he seems to catch things more easily than other children. Ciaran doesn’t speak, but signs in Makaton which means he cannot tell his parents exactly what he is feeling when he is unwell. The only way his parents know that he’s not well is when he stops drinking or becomes lethargic. He also stops eating, but his mum said he’s ‘not much of an eater anyway’.

Last year, Ciaran’s parents noticed that he was a bit feverish and had stopped eating and drinking properly for a couple of days. They took him to the GP, who did not seem overly concerned. That night Ciaran deteriorated quickly so they returned to the GP the following morning. An ambulance was called when the GP couldn’t find Ciaran’s pulse. Ciaran had developed double pneumonia and was taken to resus in A & E where he was fed oxygen and spent two weeks on the paediatric high dependency ward. He’d had pneumonia once before but it wasn’t as bad. At hospital, Ciaran was treated with two different types of antibiotics and had some X-rays taken of his lungs. He was fed through his nose for about 8 days. He was visited once a day by a physiotherapist who used a ‘hoover’ device to remove build up in his chest and nose because he ‘doesn’t know how to cough’. He was ill and off school for 6 weeks.

When Ciaran is unwell, Ciaran’s parents take his temperature under his arm and he has a PEG to ‘take fluids in’ as he won’t swallow. His parents give him paracetamol suppositories and he gets the flu jab annually. His current treatment includes steroids, Movicol, PaediaSure and multi-vitamins for his Duchenne’s. His Duchenne’s is reviewed every 6 months and he sees a consultant pediatrician who specialises in Down’s Syndrome every 3 months.

Ciaran’s parents have now been given powdered antibiotics to prevent further developments of flu-like illnesses. If he becomes unwell with flu-like symptoms again, Susan says they would take him straight to the GP. She’s unsure when to give him antibiotics and would like more information and advice on that, and information about how to tell whether something is viral or bacterial. Susan is concerned about the possibilities of antibiotic resistance, especially as Ciaran may have to take them more as he gets older and his condition deteriorates.

Susan says she and her husband were not aware that Ciaran would have so many health complications. When he is very ill, they stay up with him during the night. They have to take a lot of time off work and don’t find much time for holidays. They also find it difficult to go places and visit family as other people’s houses aren’t set up for Ciaran and he is not toilet trained, which makes travelling difficult. Ciaran’s social worker has helped them apply to various charities so they can have respite one night a month.

Susan would advise other parents of children with underlying health conditions to take their child to the GP if they have a fever that lasts for a day. Her advice to health care professionals would be to speak to each other. She would like to see more ‘joined up thinking’ among different health professionals and an holistic approach to care which means all the professionals involved in a person’s care are aware of each other. Susan fears being overprotective but stressed the importance of taking your child to the GP or to A & E if they’re unwell.

Several days after having flu-like illness symptoms, Ciaran deteriorated overnight and was rushed to hospital with pneumonia.

Several days after having flu-like illness symptoms, Ciaran deteriorated overnight and was rushed to hospital with pneumonia.

View topic summary
SHOW TEXT VERSION
PRINT TRANSCRIPT
So, how did you manage at home?

Well we were just, well we would have stayed at home with him, and we would have slept with him in the same room. We do that. And just kept an eye on him. And then he'd wake every hour, and we would try and get some fluids down him. Which wasn't always easy. And then - but that wasn't too bad. It was just, you know, us sleeping with him because he was distressed and we would sort of try and get as much throughout the night, as much fluids down him. But , you know, it got to the stage where we thought well, you know, he's not getting any better, it's been a couple of days with these sort of symptoms, so we took him to the GP. And the GP didn't seem to be overly worried about it either. So, you know, we just went home again. But then the next day it just - he seemed to deteriorate quite quickly overnight, so we took him urgently to the doctors the following morning. And basically they couldn't find a pulse, they were putting one of those things on his fingers, and they couldn't find - yeah. And they couldn't find any pulse. And basically they called an ambulance straight away. And we were taken then and blue-lighted from the GP's surgery to the general. Where he was taken straight into resus and basically they were - because he wasn't breathing very well, and they were, I think they were going to intubate him, but they managed to avoid that by putting a big mask where - on his face - where it forces oxygen in him. So it was quite, it wasn't very nice to look at because it covered his whole face, you know?

And, but it helped him.

So it blows oxygen.

Did they do tests, like blood tests and x-rays and-?

At the beginning and at the end, blood tests, yes.

Okay. And what point they told you, they say ‘It’s pneumonia’?

While Ciaran was in hospital his parents were able to stay in a charity run house next to the hospital.

While Ciaran was in hospital his parents were able to stay in a charity run house next to the hospital.

View topic summary
SHOW TEXT VERSION
PRINT TRANSCRIPT
While Ciaran was in hospital, were you able to stay there?

Yes, we were, thank god. For 10 days, they allowed us to stay in Ronald MacDonald House. And even though it’s only 30 miles away, it would’ve mean us having to, to go home every night and come over every evening so it- morning. So it was a huge help because both of us were able to stay there and. All the time. So we stayed there for two weeks. For 10 days. For 10 days, Ronald MacDonald House allowed us to stay there and it was absolutely fantastic, it was a life saver. And they should do that in more places, it’s amazing.  It, it makes- it’s a huge relief. You don’t feel then, if anything happens during the night, then you’re close, you don’t have to feel that you’ve got to rush back. And both of us felt that we needed to be there. So it was all day, every day.

Susan was shocked when Ciaran was hospitalised with double pneumonia. She didn’t realise that the flu could lead to serious complications.

Susan was shocked when Ciaran was hospitalised with double pneumonia. She didn’t realise that the flu could lead to serious complications.

View topic summary
SHOW TEXT VERSION
PRINT TRANSCRIPT
Were you much aware that Ciaran could have complications?

Not really, no. It wasn’t something that we were expecting. I mean, we knew about the flu and things like that, but I didn’t think that it would lead to double pneumonia, no I didn’t know that.

Based on your experience now, how serious do you think a flu like illness can be?

I think it can be very serious for health- for children who have underlying health issues. I feel that if you’re told, you know, then at least you’re prepared for it. But yeah, I think that it’s very important to realise that if there’s any flu like symptoms, particularly fever, you need to be sort of, on the ball pretty quickly I think and give him antibiotics straightaway.

If there is anything you wish you had known from the beginning, about flu-like symptoms and how it was going to affect you and Ciaran?

Well, yes. Basically it's, it's - as you've said, I never realised that it would turn into pneumonia. I never realised that we'd end up, you know, going into hospital A&E and going into resus. That was a bit of a shock. Sort of made us far more aware now that, that we need to keep more of an eye on that and not think that actually we'll manage on our own. You know? There's always that fear of you acting, being over protective. You don't want to end up being like a, an overprotective parent, so. That kind of plays on your mind as well. But actually in hindsight I just think it doesn't matter what anybody else thinks, you do what you think is necessary, you take them to the GP, you take them to A&E. Doesn't matter what people say, whether you're overprotective. Better to be overprotective, I say. You know?

Susan and her husband’s employers allow them to build up extra annual leave by working extra hours. They need this for attending appointments as well as for days of illness and school holidays.

Susan and her husband’s employers allow them to build up extra annual leave by working extra hours. They need this for attending appointments as well as for days of illness and school holidays.

View topic summary
SHOW TEXT VERSION
PRINT TRANSCRIPT
And when he is unwell, you say that you just sleep in -

We'd sleep in his room with him, yeah.

Okay. And what do you check for, throughout the night?

Okay. So, that must be quite tiring for you as a parent?

And how does impact on the family? Financially? Do you need -

Financially it's not too bad. It just means that we don't really have any holidays because, you know, most of our time seems to be taken up, most of our time seems to be taken up with appointments. You know? And he has appointments here, and appointments there. And we've had to take a lot of time off. We have all the summer holidays obviously, and all the Easter holidays, and all of those holidays we have to take off as well. So it impacts us not so much financially but socially. You know? Because we can't, we don't go on holidays anywhere, so. You know, so. We just stay here [laughs].

For both of us.
Previous Page
Next Page