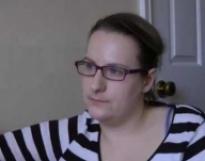 Age at interview: 29
Brief Outline: Kate has two sons both born prematurely. Her older son Tristan has cerebral palsy which mainly affects his mobility. Having a cold affects Tristan badly as he nearly always develops a chest infection.
Background: Kate is 29 and a fulltime mum to her two young sons. She is married. Ethnic background: White British.

Kate has two sons, aged 1 and 5, both born prematurely. Her first son Tristan was born at 31 weeks and had to spend the first five weeks in hospital/special care. At discharge he was given a routine brain scan and was diagnosed with cerebral palsy. Kate and her husband were not given much information about cerebral palsy or its impact on their life and his health and Kate says they’ve learnt most of it through experience. Cerebral palsy mostly affects Tristan’s mobility and Kate describes his physiotherapists as the family’s “lifeline”.

Kate explains that whenever Tristan gets a cold, it almost always develops into a chest infection. What first starts with a cough and runny nose, develops into a fast breathing pattern and high temperature. When Kate was a new mum, and lacking in experience, she used to take her son to the GP more often but says now rarely takes Tristan to the doctor with a chest infection. She is familiar with the typical pattern of his illness and is confident managing it. Since he was a baby, Tristan has refused all medication by mouth. This means that he is unable to have antibiotics, or even oral paracetamol to lower his temperature. Kate explains how the GPs “almost always” prescribe antibiotics for his chest infection but he has unable to take it. Kate says she is not too concerned about this because his body has always been able to fight off the chest infection. She also says that not having been on any antibiotics during childhood hopefully means that her son is less likely to develop resistance to antibiotics later on in life. Kate has decided not to try and force Tristan to take the antibiotics because with she has “bigger things to worry about” and needs to pick her battles.

Kate finds most of the health information online. Experience with two children has also taught her when to seek help. She says her views over consulting doctors and illness management have changed over time as she has learnt to trust her instincts more. She feels that not all GPs have enough understanding of the needs of premature babies and says that the hospital consultants are the specialists she can trust.

Kate and her husband were new parents and took their 18 month old son to A&E when he had a high temperature and was ‘struggling to breathe.’

Kate and her husband were new parents and took their 18 month old son to A&E when he had a high temperature and was ‘struggling to breathe.’

View topic summary
SHOW TEXT VERSION
PRINT TRANSCRIPT
And has it ever happened that for a sort of flu like illness that he, you had to take him to A&E? Do you remember?

I don’t know. Probably once we might have done, early days, early on when we don’t, we didn’t know and we’d say you know, “He’s got a temperature and he’s really struggling to breathe,” and we, but you still have to wait you know an hour for triage and then another couple of hours to see a doctor, and this is in a cold waiting room where they’re not, they can’t sleep and we’re kind of looking at each other [husband] and I thinking you’d be better at home. But as a new, new parents you’re kind of think, “Oh we need, we need A&E. We need A&E.” So yeah I think we probably have taken him but that was when we didn’t, wouldn’t have known it was just a chest infection. So I think now, I don’t know whether we’ve just become used to the fact that he gets them a lot and we just have to ride them out at the moment.

Kate was given a booklet when Tristan was diagnosed with cerebral palsy. She couldn’t take much information in and she felt cerebral palsy was more serious than flu-like illness.

Kate was given a booklet when Tristan was diagnosed with cerebral palsy. She couldn’t take much information in and she felt cerebral palsy was more serious than flu-like illness.

View topic summary
SHOW TEXT VERSION
PRINT TRANSCRIPT
You said that you’d maybe seen that Bliss info or that you were kind of otherwise it was dawning on you that there might be an issue around winter period illnesses and cold and flu’s and things like that. Do you remember what you, what was it that you understood about it?

I don’t know, I don’t think I really read that booklet that closely anyway.

I think I just thought oh it’s another thing to worry about and there’s not, to be honest I don’t think there’s much you could do to stop someone getting a cold apart from keeping them indoors and, and you yourself not going out. ‘Cos you, I could bring back a cold as easily as anyone else. So I don’t think I paid much attention apart, apart from normal things like washing your hands and all that. So yeah I don’t think I listened that much.

Do you, do you remember what you thought that it would mean, what, like how serious it was and what were the implications?

‘cos I didn’t read the book so I just thought, well, I kind of, you slowly start to think oh we’ve got another, he’s got another cold and I think he did get bronchiolitis once, which was quite bad and he had an inhaler for that. But in terms of the long term now I don’t think, ‘cos I, ‘cos, because he had this long term disability that was in my head all the time, that, in terms of him getting a cold I don’t think I really thought too much of it.

Yeah I was just going to ask as you said it was just another thing to sort of worry about?

Were you, was there a lot going on?

Yeah because I think…

‘cos, so he had the cerebral palsy and that was, he’s going to have that for the rest of his life, but in terms of the future I think in my head I was like, I can change that. I, if we do his physio I could change his future. Whereas if he’s got a cold I might want to, oh he’s got a cold, you know, he’s got it. It’s too late now he’s got it. You know there’s nothing I can do about it. So but like I said it’s yeah, it’s one more thing to think about and, and yes to a certain extent I didn’t go out much because it was as he got, as he got to kind of one to two years I kind of stopped going out a little bit with my friends, but when he was up to one I would still go out to the shops for things and, you know and I didn’t, I don’t have family here. At that point I didn’t have any friends so till I, you know cos we’d just moved to this area as well, so I kind of just thought well I can’t stay, I can’t stay in on my own all day.

So I’m going to have to go out.

Yeah, life has to go on as well.