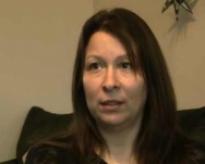 Age at interview: 38
Brief Outline: Jo’s youngest daughter, Evie-Mae, was born with Down’s syndrome and was diagnosed with leukemia at 17 months old. She has a low platelet count meaning she can get tired easily. She also has breathing problems which get worse if she gets flu or flu-like illness. Since chemotherapy, Evie-Mae, aged 4, has been much better and does not get ill as often.
Background: Jo is a housewife. She is married with three children. Ethnic background: White British.

Evie-Mae was born with Down’s syndrome. She was a sleepy baby and had low a platelet count. Soon after birth she also developed a rash on her body but the doctors couldn’t work out what was wrong. The first bone marrow test they ran came back clear. But Evie-Mae didn’t improve so they ran a second test. She was diagnosed with leukemia when she was 17 months old. She had 6 months of chemotherapy and since then has become stronger and healthier.

Before chemotherapy, Evie-Mae was admitted to hospital with a high temperature and breathing difficulties about five times a year. Most of the time she was given oxygen and was sometimes tube fed. During chemo, she went into hospital over night with flu-like symptoms and dehydration. Jo said her illnesses affected their two other children. The oldest needed time off during exams and the youngest struggled with not having her parents around.

Evie-Mae has always suffered with breathing problems, especially during winter, but this has been helped by using inhalers. She has been on different courses of antibiotics but hasn’t needed them for a while. When she is unwell, her mum, Jo, gives Evie-Mae Calpol. She feeds it into her mouth through a syringe. Evie-Mae doesn’t tend to tell her parents when she’s feeling ill, so Jo looks for the signs. She knows her daughter is unwell if she has a high temperature and “wants people to leave her alone”.

Jo has had a positive experience of the NHS and of Evie-Mae’s treatment. She trusts doctors and has always felt well-informed and reassured. Jo advises other parents to “take your children to the GP if you think they’re not right”. She also suggests that parents take advice from their GPs and that they should not be afraid to ask questions.

Evie doesn’t tend to tell her mother how she is feeling but it’s usually obvious when she isn’t well. When Evie has flu-like illness Jo likes to see her GP after twenty four hours to check whether or not she has a chest infection.

Evie doesn’t tend to tell her mother how she is feeling but it’s usually obvious when she isn’t well. When Evie has flu-like illness Jo likes to see her GP after twenty four hours to check whether or not she has a chest infection.

View topic summary
SHOW TEXT VERSION
PRINT TRANSCRIPT
Generally she doesn’t really tell me if she’s not feeling great. I can just tell by her. I have to, to watch Evie. I have to see that she maybe doesn’t want to play as much or she’s a bit tired today, she’s off her food and the main one is the temperature. You know, I constantly put the temp-, the thermometer in her ear just to check how she is doing but yeah she’s doing really, really well.

Ok. And so if you feel that she’s off

A little bit so how do you manage I mean apart from checking the temperature?

Just, I just give her the paracetamol. I give her Calpol. That’s all I do give her and then if I feel that I can’t manage it if the temperature isn’t coming down or she’s not picking up with food. You know, if she’s not, she’s not drinking much because it’s difficult to get Evie to do any of that. With her big sister I could explain to her, you know, “You need to take a drink. You need to do this.” With Evie not so easy. So if I felt that that was the case I would obviously visit my GP first of all.

And for how long do you wait before taking her to the doctor or calling the doctor?

Not too long actually. Probably depending on the temp- how high the temperature was I try to leave it 24 hours, you know, because you know lots of children do pick up after then. But yeah after about 24 hours I usually then decide like. I, I like them to maybe listen to her chest. See what it sounds like because I know that she has very quickly developed, you know, chest infections when she was younger. So I like to know whether there is anything going on in there or whether it’s just something I can manage at home. I usually just at least do that, at least go to the GP and, you know, give, let, give, get her once looked over and they are usually very happy to do that for me.

Evie started school this year and has kept well over the winter having had the nasal spray flu vaccine. The rest of her family had the flu vaccine injection and everyone has been free of flu-like illness.

Evie started school this year and has kept well over the winter having had the nasal spray flu vaccine. The rest of her family had the flu vaccine injection and everyone has been free of flu-like illness.

View topic summary
SHOW TEXT VERSION
PRINT TRANSCRIPT
So last year would have been her first year and she had the, the sniff, you know the thing up the nose. Yeah.

And this year she’s had it again, the spray up the nose. And then the family have had the injection and we’ve kept flu-free.

So what in your experience what are the pros and cons of having the flu jab?

Well I mean the fact that she’s now at school I would have thought this would have been a worse time for her. I was dreading it with all the coughs and colds that, you know, she’s around. And she’s been well. She’s, so definitely it’s definitely been good for my family this year. Whereas even last year I remember us having you know, coughs and colds. Evie had, Evie did have it up the nose last year but I do remember her being a little bit poorly with at least a cold last year, you know, common cold-like symptoms. Where this year she’s been really, as I say apart from her breathing her inhaler being a bit snotty, she’s kept well.

Jo’s advice is to ask questions so that you don’t go home and worry about your child.

Jo’s advice is to ask questions so that you don’t go home and worry about your child.

View topic summary
SHOW TEXT VERSION
PRINT TRANSCRIPT
When we were in the hospital with Evie for either bronchitis or leukaemia or whatever it was that we were in the hospital with Evie you have a doctor visit you every day. So that was always plenty of time to ask questions then and we always did. Yeah so as I say we were kept well-informed. So if there was anything at any time we wanted to know we would, and if our doctor had already been today so we weren’t going to see them again tomorrow we would make a note of it. Yeah which I would advise anybody to do. Doesn’t, you don’t want to sit worrying why they are going to administer this drug or what they’re, what the re-, you know, what the od- side effect can be of this drug.

Health professionals who care for Evie are amazing says Jo and they also take time to comfort her when she gets upset.

Health professionals who care for Evie are amazing says Jo and they also take time to comfort her when she gets upset.

Apart from thank you, you know, I realise how tough it must be. No I don’t know. I, they’re just amazing. They’re just, they know their stuff and it’s not just about the child and, you know, we know that. They’ve reassured. They’ve sat with me whilst I’ve been upset. They’ve, you know, it’s not just about the poorly child it’s about the family as well and they’ve. You know that’s a big thing. It means a lot. You have to be reassured. You have to, you know, you’re giving your precious, most precious thing over to these people that you don’t know. So yeah when they, when they come and they reassure you as well as a family, when they’ve got time for you as well as that sick child that means a great deal to the family. So thank you.
Previous Page
Next Page