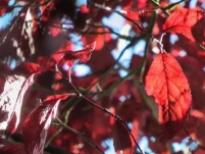 No details given
Text only

Hannah found the Inland Revenue very helpful – and only wishes other organisations had been as good.

Show in context
HIDE TEXT
PRINT TRANSCRIPT
Because I feel a responsibility. I feel like it's a weight, it's just a big weight. I go over to his house once a week to collect post and more often than not there's at least one letter that needs to be dealt with and, you know, ring up various people to try and explain the situation. I've had this with the Inland Revenue. They were actually very good and they wrote me a really nice letter. They were expressing their sympathy, please extend it to the family, they were so nice. And – because they'd written a form saying, where's your tax return? So I rang them and they were very helpful, but she said, “I'm afraid you will have to download the form for him”, she said, “Can you put in any of the details?” And I said, “well, no, I can't get any of the information. I had no authority to act on his behalf, nobody will tell me anything.” So she said, “If you can just put in his basic details and a covering letter explaining the situation”. So I did that, and they sent me this lovely letter and said, you know, don’t worry, we've entered him as nil for this year and we won't be contacting you about it again. And I thought, “Gosh, I wish everybody was like that.”

Blinking service providers are a nightmare. The electricity people, oh! Well, he had his electric and gas with Eon and there was a letter, “We note our meter reader has not been able to gain access to your house and has advised us that it looks like the house is unoccupied.” So he's been looking in the windows. I mean, you know, we've taken the televisions and things out, anything of value, because they're not covered on the insurance, so there's loads of his stuff in my house and Laura's house. So I took the meter readings and rang up, and this Scottish woman said, “oh right, well, he's actually £238 in credit.” I said, “Oh, would there be any possibility of actually putting that back into his bank account.” I'd explained the situation to her, just briefly. And she said, “Oh, I can't tell you that.” She said, “I can't possibly tell you that because you're not the account holder”. I said, “I'm not asking you to do anything”. I said, “how about – will you be reducing his direct debit then?” This direct debit of £86 was coming out. And she said, “I can't discuss that with you either, you're not Mr [Andrew Smith] now, are you?” She said to me like that. I was livid. I said, “how dare you speak to me in that tone of voice and so rudely”. I said, “All I am trying to do is make sure that there are sufficient funds to pay his bills, that's all”.
Previous Page
Next Page