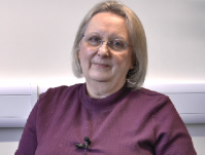 Brief Outline: Carole has been a research midwife for about 5 years. She is currently the lead coordinator of a randomised controlled trial looking at the early management and detection of hypertensive disorders in pregnancy.
Background: Carole is a research midwife. Her ethnic background is White British.

Carole has been a research midwife for about 5 years. She originally trained and worked as a general nurse in areas such as orthopaedics and surgery, before becoming a sister in cardiology. After Carole’s children had grown up, she retrained as a midwife – a career which she had always been very interested in. Carole worked for 17 years as a midwife and, during this time, she also undertook a Master’s degree in Applied Sociology. The qualification helped develop her skills and knowledge about different types of research, and she focused her dissertation on pregnant women who had experienced domestic violence.

Carole started her first job as a research midwife in 2012. She worked on the pilot study of a randomised controlled trial looking at the early management and detection of hypertensive disorders in pregnancy, and she is now the lead coordinator of the full trial. Carole has been involved in many of the study activities, including recruitment (checking eligibility), taking consent from participants, showing participants how to use the equipment (home blood pressure monitors), and contacting participants if there are any concerns with their blood pressure readings. As the lead coordinator, Carole also supports research midwives new to the study by helping to prepare them for the role and shadowing them initially. She hopes that the research results will lead to improvements for pregnant patients as well as for community midwives and other health professionals who look after women and babies.

Carole has been interested in research for a long time and feels it is an important way “to promote better standards of health for women”. She thinks there is a close relationship between clinical practice and research because both require doing the “best you can” for the person involved (the patient or the participant). She points out that, in midwifery practice and research, this usually means helping two or more people “because you've got a baby on board as well”. Until quite recently, Carole continued to work occasional clinical shifts at the hospital – for example, on weekends. She stopped when the research became very busy but she likes keeping the option open to go back to practicing midwifery in a clinical setting.

Carole likes that her job as a research midwife allows her to spend time with pregnant women and to support them in various ways. This might be answering a question about pregnancy or listening to the woman’s concerns about another matter. Carole highlights that some women have had upsetting past events, including premature deliveries or traumatic births, and memories and fears can come to the fore when they are pregnant again. Carole says it is important to be sure that pregnant women understand what they are agreeing to when they sign up to be in a study. One challenge she has found is with women who do not have a good grasp of the English language, as it can be difficult to know whether they have fully understood the information provided about the study.

Carole expects she will continue working as a research midwife for another two years. After this, she would like to do voluntary work and undertake some research of her own choosing. She is looking for funding to do a PhD on maternal obesity, as she believes this is a key area needing more research.

Carole felt there was good synergy between the aims of both clinical and research midwifery.

Carole felt there was good synergy between the aims of both clinical and research midwifery.

View topic summary
SHOW TEXT VERSION
EMBED CODE
PRINT TRANSCRIPT
I think still it's having that rapport with women. I don't think that goes. I think as a researcher, you're looking for promoting better standards of care. And I think that's always what you would aim to achieve on a daily basis, in clinical area, is the care that you're given. And, and it should be paramount, you know, that you're doing as best you can for that person. And I think that applies in research. Because you're looking at promoting better maternal and fetal outcomes for women, that's what the research is about. This early detection and management, as we're doing now, is just such a wonderful thing. Because in the clinic we would be looking for that, you'd be looking for the signs and symptoms. We do the blood pressure and urine checks every antenatal check. And as well as blood tests if they need to be done. It's about referring people on. And suddenly it runs hand-in-hand. It's quite symbiotic, really. Because what you're applying in the clinic, you're actually doing in that research really, indirectly.

And so I don't see the difference. And I think it’s tremendous value. Because all of the midwives I talk to on the clinic areas just think it's amazing.

Carole had no shortage of evidence for her midwifery revalidation, including activities undertaken for Continued Professional Development or feedback from patients.

Carole had no shortage of evidence for her midwifery revalidation, including activities undertaken for Continued Professional Development or feedback from patients.

View topic summary
SHOW TEXT VERSION
EMBED CODE
PRINT TRANSCRIPT
Oh, I've got lots. I mean, I've attended pre-eclampsia days. Both at the colleges and in [City name]. Because we have so many days of CPD [Continued Professional Development] that we've got to do so many hours. And I'm well over my hours for the three years. We have mandatory updating that we do every year as midwives. So, that complements it. And then we have to-, as revalidation we have to do five reflections on different areas. It could be anything, basically. It could appertain to a clinical issue, or it could appertain to research.

Anything that you think is appropriate. And then we also have to have people to, that interview you. And it could be another midwife or management, and they put you forward and they write about you. Or it could be from the women themselves. And I've got some that have personally sent me letters. Or I looked after one lady who'd had an intrauterine death, for example. And that's within the last three years. And I looked after her right the way through until she delivered, and she sent me the most beautiful letter. So, you know, you can - because it's all confidential and it goes to the NMC, we can scan those and put them on as evidence of, of how we've operated in our work. So, that- mine's coming up in February.

Carole felt it was important to work around other clinical activities and reduce the impact on her colleagues.

Carole felt it was important to work around other clinical activities and reduce the impact on her colleagues.

View topic summary
SHOW TEXT VERSION
EMBED CODE
PRINT TRANSCRIPT
So we try to be unobtrusive. And, and just deal with that lady when and if we can. So we'll make ourselves known and say, “No, you know, we'll wait until you've finished”, or “When's a good time that we can come back after?” Or, “When will this lady-, will you be finished with this lady?” And people are very accommodating. Or in a busy ward, if it's ward rounds and that, you've got to be mindful and just, you know, if you want to access notes and that, you've got to go and politely ask, and say, "Would it be alright, I'm just going to be over there?" Or if you know it's not a right moment, then you don't do it, [background noise] you come back.

You readily know when you've worked on clinical what the scenarios are and what's going on. And then it was like the other day in ultrasound when I was doing a baseline recruitment of a lady, just sat in a quiet corner, when one of the research doctors wanted to take this lady for scan. But he was very nice and said- he shouted out her name, and then she said, “Oh, that's me.” And he looked at the iPad and said, "But are you finished? Is that alright?" And I went, "No, no, no –you go first." And she came into my office after. Because the last thing you want to do is, you know, they see something like a hundred ladies through that ultrasound in a morning, and sometimes it's 67 in an afternoon, so you know how busy it is. So they have their quota of patients that they've got to see. And you know those scans can last 30 minutes, sometimes they'll have to bring them back in. So you've got to be mindful of other people's needs as well as the lady.
Previous Page
Next Page