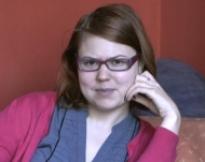 Age at interview: 25
Age at diagnosis: 20
Brief Outline: Victoria first experienced depression when she was a teenager. At university she experienced some difficulties coping, and her GP prescribed citalopram. She only took it for a few months, but has since experienced another episode of depression and now takes citalopram regularly. Victoria was diagnosed with Crohn’s disease in her early 20’s and the symptoms and restrictions that it places on her life have contributed to her feelings. She also takes regular medicines for the Crohn’s disease.
Background: Victoria is single and works as a website coordinator. Ethnic background: White British

Victoria has been prescribed citalopram on two occasions. The first time she was at University and had been finding it difficult to cope with a number of different aspects, and eventually went to the doctors to seek help. The second time was more recently - on both occasions she spent some time discussing her situation with the GP and it was decided to wait and see how she felt in a few weeks rather than being prescribed antidepressants immediately. It was Victoria’s decision eventually to try an antidepressant, as she had been having suicidal thoughts and was clearly not coping.

‘I tried some counselling sessions and they were helpful but I found that I’d get everything straight in my head in the session and then come out and a few hours later be all angry and all over the place again and I just thought I need something stronger to sort me out, I want to give this a go’.

Victoria said that within days of starting taking citalopram she felt much better. Although she knows that generally it can take about 6 weeks to start to feel benefits from an antidepressant, she thinks it could have been down to thefact that she was ‘getting some help’.

‘ I noticed an improvement immediately and people have said that’s probably the placebo effect because they take a couple of months to kick in but as I say as far as I was concerned I instantly felt much more calm, much more happy, much more able to view things kind of clearly’

Victoria has had Crohn’s disease since she was in her late teens but it took a long time for doctors to diagnose. Crohn’s causes physical symptoms that are distressing and difficult to deal with but it also affects her emotionally as it can be difficult sometimes to socialise and join in with the usual things that young people do because she can feel very tired, as well as needing to be careful about diet and drinking.

‘It was just very difficult because there are certain things that society expects of you because you’re a certain age and I couldn’t do them or take part in them and I just felt very abnormal’.

Because she has Crohn’s disease Victoria is used to taking medication on a regular basis.

Victoria’s GP has suggested that she continues to take citalopram on an ongoing basis even though she is now feeling well.

She feels it’s important that GP’s should spend time discussing the options with patients and thinks they shouldn’t give out antidepressants at the first opportunity.

Victoria tried counselling first but returned to ask the GP for...

Victoria tried counselling first but returned to ask the GP for...

View topic summary
SHOW TEXT VERSION
EMBED CODE
PRINT TRANSCRIPT
I tried some counselling sessions and they were helpful but I found that I’d get everything straight in my head in the session and then come out and a few hours later be all angry and all over the place again and I just thought I need something stronger to sort me out, I want to give this a go. And then again I mean it was quite a lengthy discussion with the doctors and I went back several times before anyone said, you know, we are going to put you on pills.

So what was talked about before they actually decided on them?

I think just whether it was serious or not, enough to put me on the, I mean they have the questionnaires that you have to fill in, you know, how many times have you felt like this week and stuff like that. And it was obviously getting quite sort of solid that I really wasn’t coping very well with things.

View topic summary
SHOW TEXT VERSION
EMBED CODE
PRINT TRANSCRIPT
Well I noticed an improvement immediately and people have said that’s probably the placebo effect because they take a couple of months to kick in but as I say as far as I was concerned I instantly felt much more calm, much more happy, much more able to view things kind of clearly. My mum kept going round the house going ‘Oh it’s amazing she’s a different person its lovely we’ve got our lovely little girl back,’ and all sorts of things like that so I don’t quite know why that was but certainly that’s kind of how I felt.

And did you have any side effects at all from it?

No not the first time round not that I remember everything seemed fine.

View topic summary
SHOW TEXT VERSION
EMBED CODE
PRINT TRANSCRIPT
Yes it said it wasn’t recommended to drink with antidepressants and that’s kind of the idea that people get anyway I can’t now remember whether the GP, the initial GP several years ago actually told me that I shouldn’t drink. us certainly I didn’t and then when I went back on this time I thought ‘oh no I’m not going to be able to drink and that’s going to seem odd and then people will find out because they’ll want to know why I’m not drinking’. And I stuck it out for a few months and then I just happened to go to the GP about something else and I think they asked me how much I drank and I said well I don’t because I’m on citalopram and she said ‘What, who told you that?’ and I said ‘but it says in the little leaflet you’re not allowed to it’s a really bad,’ ‘It tells you in all the leaflets it doesn’t mean anyone takes any notice and I was like ‘Oh alright then fair enough.’

Victoria found it reassuring to know other people felt the...

Victoria found it reassuring to know other people felt the...

View topic summary
SHOW TEXT VERSION
EMBED CODE
PRINT TRANSCRIPT
How much do you use the internet to find out about health related information like about antidepressants or?

I use it quite a lot but I find it quite annoying because the NHS style official websites have almost just the blurb that’s in the packet on them whereas if you go onto something like, you know, ‘Yahoo answers’ then there’s loads more kind of real time information but obviously you don’t know whether they’re real people or if they’re making it up. So I think certainly a website like this that’s got, you know, genuine certified information on it is much better and I wish there were more websites like that.

So is it quite helpful to find out how other people deal with different aspects?

Well I think so because just to know that there’s other people going through it first of all is a massive bonus knowing you’re not the only person in the world because that’s often how you feel that it’s you and everyone else. so to know that actually it’s everyone else and a couple of other people are much better, it certainly helps me. And just to hear other people, it’s the language that they use, you know, they don’t say it is unadvisable to do this, they say oh I felt really sick when I did that and it just makes it a bit more.

It makes it a bit more real.

Victoria takes medicines for Crohn’s disease as well as...

Victoria takes medicines for Crohn’s disease as well as...

View topic summary
SHOW TEXT VERSION
EMBED CODE
PRINT TRANSCRIPT
I wish I didn’t have to do it mainly because I’m so full of chemicals anyway and I used to have a massive phobia of taking pills so when I was first diagnosed with the Crohn’s having to get over that was quite a hurdle. And so it is just quite annoying, you know, that part of my breakfast is all these little pills but I suppose I’ve just kind of accepted it and because I already take mediation to make me feel physically okay, to take medication to make me feel mentally okay doesn’t seem like that much of a leap. but I do sometimes worry about all the chemicals and bits and pieces and manufacturing that goes into it and stuff like that.

But it sounds like the only affect you’ve had has been a positive one I mean you haven’t had side effects or anything untoward associated?

No I’ve been quite lucky yes.

And do you talk to other people and tell them that you take antidepressants, is that something you keep personal?

No I generally tell people I’m always really open at school people always used to find out like the boy that I fancied or whatever before I ever did and it was kind of a bit like walking in and having like the Sun newspaper doing a feature on me every day so I just kind of got used to it so I’m not really a very private person I sometimes wish I could be but I’m just sort of used to. And I’ve got to the point where I am so open about so many things if I’m not open about something else it feels a bit wrong.

And what sort of response do you get from other people when you tell them about?

Everyone’s pretty much has been fine, one of my friends was like ‘Oh well we’ve got to get you off them straight away,’ and I sort of went ‘Well no because I’ve only just been on them and I need them for a bit,’ so I don’t think we’re quite, I don’t, I think he was acting like I’d told him I’d got addicted or something like that it was really strange. But everyone else is just ‘oh yes fair enough okay, is there anything you need?’ And actually a lot of people have turned around and said ‘I take them too welcome to the club!’
Previous Page
Next Page