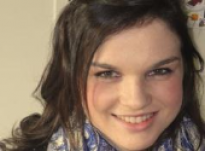 Age at interview: 19
Age at diagnosis: 15
Brief Outline: Harriet was diagnosed with anorexia nervosa at 15. After a couple of inpatient stays and outpatient service with adult mental health services, her weight stabilised and mindset started changing. She has now moved away from home to study at university.
Background: Harriet is a university student. She is single and lives in halls of residence. She is originally from Northern Ireland.

Harriet started restricting food when she was about 15. She says she first felt that weight loss would boost her confidence and help her make friends. She also felt pressure over an upcoming beach holiday and decided to lose some weight. Harriet says restricting soon became irreversible and after a few months her mum took her to the GP. Her mum’s concerns were first brushed off but after a couple more visits Harriet was referred to a local adolescent mental health service.
While waiting for the appointment, Harriet saw a private counsellor. They were not specialised in eating disorder and Harriet didn’t find it particularly useful. Harriet’s condition got worse and she was eventually hospitalised for a few weeks. Because there are no specialist inpatient services for eating disorders in Northern Ireland, she was admitted to a general adult hospital ward. By the time of discharge, she had not reached a healthy weight and relapsed soon at home. Harriet had to drop out of school and go back to hospital. This time she was referred to a specialist adolescent clinic in London where she stayed for 7 months. During her time in London, her parents visited her and her brother, who was studying in London, came to see her regularly.
When Harriet was discharged and returned home from London, she was 17 but was seen as an outpatient at the adult mental health service. Harriet says it worked better for her and through cognitive behavioural therapy (CBT) and her own motivation her weight stabilised and she learnt to “challenge anorexic thoughts”. Accessing services was not always smooth for Harriet. There was a lot of shifting and changing among professionals she saw and she also struggled to be referred to the appropriate services.
Harriet has just moved away from home to start University in England. She says she wasn’t fazed by the change as she has always been independent and the transition has helped her take even more responsibility for herself. She is careful to make sure she eats enough daily and has seen the University counselling service a few times. Harriet says sharing kitchen and social spaces has been okay although social situations around food can trigger anxiety in her. Harriet wants to become a doctor and says she couldn’t do such a stressful and fast paced job and have anorexia.

Harriet is very independent so found it easy to settle at university. Her mum said not to worry...

Harriet is very independent so found it easy to settle at university. Her mum said not to worry...

View topic summary
SHOW TEXT VERSION
EMBED CODE
PRINT TRANSCRIPT
I think, in some way, my time in London helped me in terms of living away from home for such a long time. It didn’t really faze me coming over. I mean, obviously, I was anxious and stuff but maybe not as much as I would have been. And I think the eating disorder somehow, strangely gave me independence because I’d been sort of independent. I always sort of chose what I ate and chose what I wanted to do, whereas some people, you know, come and they’ve been, their mums done everything for them, whereas I sort of personally chose to be more independent, yeah. Yeah. It’s just been a case of making sure I eat enough and, you know, it’s busy and I sort of find that it’s sort of, well, sometimes it’s easier to eat because, you know, I need the energy to concentrate and I find if I do get quite, you know, haven’t eaten for a while and then try to do work it just, it’s, doesn’t work and I don’t focus and stuff.
How have you found it practically the sort of the routine of buying food and cooking and eating? Do you find it easy to maintain or?
Buying food is okay. Sometimes I worry if I spend too much but my mum’s like, “I don’t care how much you spend, just as long as you’re eating.” And cooking has been okay. Sometimes I’ve sort of thought, “Oh, I can’t be bothered to cook.” But I’ve always had something sort of handy. Sharing the flat and sharing the kitchen and stuff, it’s something, it’s been okay but I’d don’t really like people commenting on what I eat or.
Just sometimes like social food like maybe getting a pizza or if people want to get fish and chips, I find that quite anxiety provoking ‘cos I like to sort of have my routine and know what I’m going to eat and I still like need to be prepared for something different.

Harriet encouraged parents not to dwell on the past but focus on the situation here and now. Not...

Harriet encouraged parents not to dwell on the past but focus on the situation here and now. Not...

I think sometimes parents feel like they could have done something, they could have stopped it or something they’ve done when they were bringing their child up but even if it was, I mean there’s nothing you can do about it. You have to deal with the situation as it is now and just support them, try not to get angry and shout and get sort of emotional overly emotional. You can just be there for them and take it one step at a time.

Harriet emphasised that although professionals can help and offer support, the individual needs...

Harriet emphasised that although professionals can help and offer support, the individual needs...

View topic summary
HIDE TEXT
PRINT TRANSCRIPT
I think I expected the professionals to wave a magic wand and make everything okay, make me feel okay but it just doesn’t work like that and, you know, until you decide that you want to do something then the professionals can only do so much.
Taking the first step is the hardest but the next time you try it, it’s easier; take things a step at a time. You’ve got to stop believing what anorexia says as you will die before you’re good enough for anorexia; you may as well fight back against anorexia now.
They can support you and not to discount what professionals say because sometimes it does make sense and, you know, things do, I mean you do, your thinking is a lot more restricted if you’re at a low weight or severely restricting, you know, it does make life a bit easier if you let yourself eat a bit more and just take risks.
Previous Page
Next Page