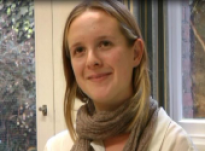 Age at interview: 25
Brief Outline: Anna has had difficulties with food since she was about 9. She has gone through stages of restricting, binging and purging and then overeating. It has been an isolating experience and made her feel vulnerable around food.
Background: Anna is 25. She is a sculptor and a student. She has just moved back to live with her parents to save money whilst studying. White British.

Anna remembers having difficulties with eating most of her life, and definitely from around the age of 9. She grew up in “a high achieving family”, as one of four sisters.
Although at home dieting was considered bad, Anna went on a diet to lose some weight. She describes being scared to grow up and her body changing. She also describes herself as shy and, over time, her relationship with food and eating isolated her more from people.
Because of the weight loss, and delay in her development, Anna’s parents were getting worried and took her to a doctor, and Anna was admitted to a hospital. Anna says that other people intervening in her life felt like an “invasion” and she refused to talk to the psychiatrists about what was going on. Although she retrospectively acknowledges why her parents persuaded her to see a professional, at the time she felt like she was being punished for doing something “wrong”. This made her feel very angry and she says she still feels that being in certain places like around her parents’ kitchen in her childhood home can be a trigger.
Restricting gradually developed into bulimia and then overeating. Anna was self- harming and she says she “abused” her body through (not) eating. Anna has gone through different stages of not eating at all, then overeating, or binging and purging and her weight has consequently fluctuated. Anna says she has always struggled to “fit eating with life” and it has greatly affected her relationships at home and with friends. She describes feeling vulnerable around food and often chooses to eat on her own, rather than share with others.
Anna is a sculptor and in her work is fascinated how the body relates to the outside world, partly through food. She says her difficulties around food have affected her work, partly because sculpting requires energy and strength. Through her life, Anna has kept note books and sketch books. She has just started a Masters’ course in Art and says her mind sways between wanting to be positive but not always finding it possible.

Anna was one of four sisters. She felt like the “podgy” one and described having a difficult...

Anna was one of four sisters. She felt like the “podgy” one and described having a difficult...

View topic summary
SHOW TEXT VERSION
EMBED CODE
PRINT TRANSCRIPT
So now I’m 25 but probably… I would say I’ve been kind of having difficulty with eating for most of my life since I was quite young, maybe nine or ten.
I’ve got three sisters so one of four girls and we did lots of girly things, ballet lessons and that kind of thing, I think I was always aware that I was the podgy one and, and so probably at eight or nine would start thought, “I know I’ll be, I’ll be thin”. And then was also, always, always quite aware of having to do something for, for other people and, and, neglect yourself. And, and so I’d spend a lot of time raising money for charity and not eating anything [laughs].
It all seems quite silly now but my dad’s a GP so he, after a while when I lost a lot of weight quickly at that, that kind of age they took me to hospital and blah blah blah. And I think that was quite a trauma because the whole difficulty of eating so much comes from the people around you and how you relate with your family, how they relate with you, so having them, it felt like them dragging me to the doctors and it, getting me weighed and like anything could be really forceful sometimes. So I think that, that was quite, they were obviously concerned for medical reasons and I had to go to hospital and that kind of thing. But that to me felt like a real invasion [laughs] and I think also you feel like you’re doing something wrong when your parents kind of try to change your behaviour in that way.

Anna’s parents and doctors got concerned because her period didn’t start normally. She felt angry...

Anna’s parents and doctors got concerned because her period didn’t start normally. She felt angry...

View topic summary
SHOW TEXT VERSION
EMBED CODE
PRINT TRANSCRIPT
I was quite shy… and probably scared about growing up so of course that was the main thing that doctors and parents were worried about not developing into puberty and I think that, that’s why in a way it was quite forced medical, you know, going into hospital and that kind of thing. But, and then I remember a bit later when obviously I , a few years later, my periods hadn’t started but when they did, I just remember feeling a huge sense of shame and like they’d won [laughs]. Obviously that’s so bizarre.
And… but I remember feeling quite angry that in a way everyone else had had such a lot of, had all their interests in my body and, and not, not wanting that which I think is understandable but to what extent, it’s difficult how to balance that when you’ve got a ten-year-old [laughs] girl and she’s not; but then I know later I’ve dieted to such an extent that my periods had stopped again and just, that’s still a question, you know, for months and... Why do I play with that in my body, why do I play with that kind of aspect of being a woman and what, it’s difficult to know kind of quite how it all links up [laughs].

In addition to writing, Anna kept a sketch book in which she drew about her experiences.

In addition to writing, Anna kept a sketch book in which she drew about her experiences.

View topic summary
SHOW TEXT VERSION
EMBED CODE
PRINT TRANSCRIPT
Did you have another way of communicating your thoughts or, did you write, did you do art at that point, did you, is there another outlet if you didn’t want to necessarily talk to people?
Yeah. I’ve always kept books and sketch books and things like that but again there’s always [laughs], there’s always a fear of, “Oh no other people will see.” I don’t know what this, it’s a huge fear of other people knowing about… anything unclear so yeah I kept sketch books, and art…I remember throwing away a lot of books at some, at some point because you know, all that’s behind me kind of, throwing things away but it’s only a book [laughs]. Yeah I would draw, draw pictures and keep, you know, keep some that’s, keep kind of, I remember keeping kind of mark book, almost, it’s almost like marking how, you know, how you’ve been if you’ve not eaten anything, keeping it all on paper. Actually they probably would be really interesting papers to look at but I think I threw a lot of them away but that’s probably fine.
Previous Page
Next Page