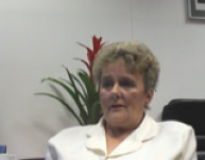 Age at interview: 63
Age at diagnosis: 30
Brief Outline: In recent times, has fared better with a new supportive husband, a caring GP and Prozac (20mg/day). She continues to struggle against feeling to blame for things outside of her control.
Background: Works in the service industry, married with 4 grown children. Had a difficult childhood family life. She has had ongoing bouts of depression.

When she was a child she thought she was going into a children's home as a punishment because she...

Show in context
SHOW TEXT VERSION
PRINT TRANSCRIPT
Because of my problem...  Because my Mum had had such a bad time having to run me.... I mean from now, knowing how far [the Hospital] was from where I lived, it must have been an awful trek for a woman during the war years to have to take a child that small with another one in tow twice a week to... for radiotherapy or radio treatment, whatever it was. It was cancer I had. And I now believe that it was a heck of a trek. Then, I used to think, "Why doesn't she love me? Is it because I'm sick? Is it because I'm causing too much trouble?

There was no other reason for it. It's just I was a normal child. In my own little mind I was a normal child. I played with my toys, I tried to play with the neighbours children. I loved my sister, and my brother was only a tiny baby, but I mean I still loved him and then as I say, suddenly Dad came in one day and he said, "Ah, pack your cases you're going to Nanny's", which was his mother, "and then tomorrow you will be collected".

You know at that age you daren't say, 'Well where am I going? Who's going to collect me?' And my uncle, my Dad's youngest brother who was'. he's about ten, fifteen years older than me. He and his father and my Nan took me to the railway station.

And I was collected by a nun who, on the train journey to [town]...to the convent told me that my younger sister would be following us, but not quite so soon. They wanted me settled in first. And all this was because my mother was sick. But [sigh] I never, [pause] whether it's because they didn't talk to us about how sick she was, why she was sick, what it was that was making her sick, I don't know. I assumed it was me. I'd been pulled away from the family and put in this horrible place. It wasn't horrible but it... a child of seven going into this big stone building with a nun and a big empty hallway. I mean, you can imagine what children's homes were like years ago, nothing like they are now. And I thought this is my punishment, and all because I was born with something wrong with me.

She had to experience not taking her Prozac to understand that it works for her, and she now...

Show in context
SHOW TEXT VERSION
PRINT TRANSCRIPT
But they (Prozac) are working for me and I will keep going with them. She says I can't get addicted to them and I don't feel I'm addicted. I had to have the experience of not having them to know that I can't be without them and that was, in a way, a good thing that we forgot to take them with us because it tells me don't ever forget to take them again, which I don't. The first thing I do in the morning is take my tablet.

So as I say, I think that is the one. It is the tablet for me. I feel better on these than I ever felt when I was on Librium, Valium, Amatryptiline. I've had so many different antidepressants over the years that this is definitely the one that makes me feel calm all day, and I don't feel docile like I used to. I used to get zombified sometimes but I don't on these.

Has met a woman friend with depression whom she can trust and talk to about personal issues.

Show in context
SHOW TEXT VERSION
PRINT TRANSCRIPT
And this lady, she is 79, which is a little bit older than me, not a lot, and her husband's semi-invalid and all this, that and the other. And you know, over the five years I've known this lady, because I go shopping for her or I go to a meeting with her, council meeting or something. I've got so close to this lady that I can talk to her.

And we got on to talking about my Dad. And I, now, the way I feel now I, I've said to her that, I mean, this is all I've said to her but I feel I could if I wanted to, talk to her about it. The way I feel about my father at the moment I wish I hadn't bothered, you know. I realised then I'd said something. And she said to me when you are ready, you'll tell me. She didn't push me. So therefore I feel, she's not nosey, she doesn't want to know out of curiosity else, she would have, you know, kept on picking. So I feel I could talk to her. Again it would be another piece of support.