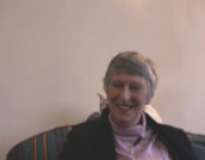 Age at interview: 59
Age at diagnosis: 19
Brief Outline: Helpful approaches have included medication, self-help books and tapes, and personal development courses. Received long term therapy on the NHS. Recently discovered she had dyslexia, explaining many of her difficulties.
Background: Has one son and one daughter. Was unhappy as a child. She has had post-natal depression and numerous severe bouts of depression. She has not needed medication for many years.

It took until she was 19 to be diagnosed with depression. Yet she has come to the conclusion that...

Show in context
SHOW TEXT VERSION
PRINT TRANSCRIPT
I wanted to begin by asking you, was there a time before depression that you remember?

Not really, because whilst I always believed that my depression started in my teens, I've more recently come to the understanding that in fact, it started around the age of 7. And even as a young child 7, 8, 9, I would sit with other people, other children, and it was as if I was on the edge.

And I wasn't part of it, and there wasn't a lot of joy or happiness. I had friends, but even that, it never seemed to be enough. So.... life was very difficult, right through until I suppose I had a diagnosis at the age of about 19, and that was because I was having difficulties at work, and my employer said, "I think you ought to see somebody", and I was referred to a teaching hospital in London where I saw an eminent psychiatrist who diagnosed chronic depression of several years standing.

That was really based on what I was able to tell... tell him then, and he recommended psychotherapy, which I had for nearly two years.

She felt lucky to get long-term therapy on the NHS, since the lack of resources means that so...

Show in context
SHOW TEXT VERSION
PRINT TRANSCRIPT
But I was working for consultant physicians who got me in. So I had a helping hand. If I was anybody, maybe I wouldn't have got it. I mean I know very few people in all these years who have had psychotherapy. I don't know what the criteria [are] for choosing who has it, who doesn't. I know there are very long waiting lists. I know people wait for 3 years, and 3 years is a big chunk out of somebody's life. It's just very sad... you know, because I do believe that whilst medication helps people keep going, it's not necessarily the answer.

But then again that comes from two schools of thought. You've got your psychologists, you've got your psychiatrists. Psychiatrists are quite happy to write you a prescription for medication. And perhaps that's when they believe there is a chemical imbalance in the brain, which is OK, I can go along with that... Your psychologist is probably going to say, it's events in your life, it's things that have happened, or what is happening... Let's put the two together, you know, they can go hand in hand.

But because there are so few psychotherapists, because it is so expensive, you know, even within the health system it's expensive because of the time.

Did a course on counselling, and although sometimes painful, it helped self-development and in...

Show in context
SHOW TEXT VERSION
PRINT TRANSCRIPT
When my son started school...I actually went into adult education... to an evening class, which was labelled counselling. But in fact when I went there.... it was only 1 evening a week, it was more on.... self-awareness. It was a mixed class... and that's one of the points, that was one of the big turning points around that time.

Those classes went on in various forms and another for about 2 years. And we covered some areas which were incredibly painful, and I would sit there thinking, "What am I doing here, why am I putting myself through it." But in fact, I learned so much it's... it's a big part of my journey. Over 2 years I actually had 2 different teachers... both were psychosynthesis trained, which was a method of psychology I'd never come across before. But it was sufficiently interesting to keep me going for 2 years. I met some terrific people in these classes.... I suppose we were all on a similar journey, and they were... it was worth going.... I wouldn't go back and undo it.

Feels that God has sustained her through depression and not let her suffer too much, despite...

Show in context
SHOW TEXT VERSION
PRINT TRANSCRIPT
I think there are a lot of things we actually don't understand, and up to a point, but probably in depression, the depths of depression, you can't really do anything about. But prayer does help, and believing that the holy spirit will sustain... that God will not allow us to suffer too much, and will give us the strength to cope. It is often rubbished, but there again, that's what I believe. I have been sustained. It doesn't mean I've never thought of suicide in the real pits... in the 60's, in the 1960's I suppose, there were times when, "I just don't want to be here anymore, this is so incredibly painful, my life is such a mess... I feel a wreck, I am so unhappy, I am so miserable... What else can there be..." This is particularly in a period of depression that just went on and on and on. I didn't have faith then, I didn't even attempt to... I didn't attempt suicide, it doesn't mean to say I didn't think about it.

Found that attending a support group and gaining its support over a period of 2 years was what...

Show in context
SHOW TEXT VERSION
PRINT TRANSCRIPT
[Laughs] About that time I heard a radio programme where they were talking about self-help groups. And I suppose this was really meant to be because the person was saying, "To benefit, really benefit from self-help groups, you really need to stay with it for 2 years," and I thought, "Rubbish, 2 years, no it won't take that long." But in fact on looking back a little bit, you know a few years down the line, I thought, "Yes 2 years is about right", not necessarily for the life of a group, for an individual. Now a self-help group isn't group therapy but it is very therapeutic.

By sharing, by sharing... well people meeting with a shared interest. You put something in, take something out. There are people there who, they won't say, "Pull yourself together, pull your socks up, what have you got to be depressed about?" There is none of that. The mutual support is just unbelievable.

Argues that those with depression ultimately need to take responsibility for recovery, although...

Show in context
SHOW TEXT VERSION
PRINT TRANSCRIPT
Have belief in yourself that you will get out of this. And what I often say to people constantly on the telephone when they say, people say, "They won't do this" and, "they won't do that." I say, "Well that's right, no-one else can do it for you. The only person that can actually bring you out of this is yourself". That was a very difficult concept for me to grasp... but I now know it, it's true. And so if I am the only one who can get me out of this pit of depression, then it is up to me to get on with it.

It is a case of not allowing yourself to forget that you can do something for yourself. You can get yourself out of it. In fact, the only person who can get yourself out of it is yourself, and no one else. It doesn't mean to say other people can't help you, therapists, medication, whatever, going to classes, there are other people who can help you. But you have actually got to do an incredible amount of work yourself. Developing that self-belief "I deserve the best".