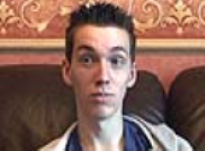 Age at interview: 21
Brief Outline: Darren is 21 and has experienced depression from the age of 16 for about a year. He has epilepsy and has had brain surgery which made the depression worse. He now experiences occasional low moods, mainly after seizures. Darren enjoys sleeping and drawing cartoons.(White British).
Background: See 'Brief outline'

Darren is 21 and has experienced depression on and off since he was about 15. Darren was diagnosed with epilepsy when he was 11. Because of the side effects of his epilepsy medication; acne and shaking, he was bullied at school, even by some of his friends. This all had a big knock on his self-confidence throughout school and into college. Things came to a head when his then best friend “ditched” him for a new girlfriend and a girl who Darren had met really hurt his feelings. Darren started self-harming and attempted suicide.
After the suicide attempt, Darren was admitted to a psychiatric unit of a local hospital. The stay at the unit was a very unpleasant experience for Darren; he was the only young person there and he says he, “Didn’t see very nice things in there”. He was referred onto a psychiatric hospital in London where he stayed for three months. He said he found some of the counselling and psychiatrists helpful but that the group sessions weren’t his thing at all. He made some friends there and he managed to hide a play station in the room for something to do.
Darren’s epilepsy was getting worse and the only epilepsy medication, out of many he’d tried over the years, which helped him made the depression worse so he had to come off it. It was suggested to Darren that brain surgery could help to control the seizures. He was told that one of the possible side effects of the surgery was depression – which is what happened to him straight after the surgery. Three days after the brain surgery, Darren was transferred back into the psychiatric hospital. During this time, he attempted suicide for a second time and then ran away from the hospital. Now looking back on it, Darren says the suicide attempts were just “cries for help”.
The seizures came back two years after surgery and are still not controlled but his mood has been better. He’s been on anti-depressants for four years. Until recently he’d been taking them in the evening which caused him severe insomnia and not being able to get to sleep till 5 or 6 am. He was told he’s “just a night person” or “lazy” until a doctor finally realised to tell him to take his tablets in the morning, in stead of night time. Darren says the best that would help him would be getting his seizures controlled and finding a job. He’s got a lot of support from his family, has one very good friend and he also does a lot of voluntary work and draws cartoons.

View topic summary
HIDE TEXT
PRINT TRANSCRIPT
I had quite a few [pseudo seizures] that day, and they only happened after the surgery. So when I first had it was in this house yeah, and they thought I was off having a proper seizure, and when I was having them in hospital they thought I was having fits as well. And I didn’t know what was happening either. It’s just, it was weird. It’s just kind of like you lose control of your body but you know, you know what’s happening and, well, just oh it’s weird.
What happens in a pseudo seizure? Is it different to an epileptic seizure?
Well yeah, yeah. ‘Cos I know what’s going on but I can’t control my body and I was just kind of, well I was just basically you know like that and like that and, my Mum and Dad first thought it was a, a seizure but I told them, “None of them weren’t” I knew what was going on, but I don’t know what’s going on. And so they rung the hospital and I went in again, that’s when I first went in. I kept having them, they were like, “Yeah, he’s in a deep depression, he’s having pseudo seizures.” I kept having them for a while, but they stopped eventually. Yeah.

After four years on antidepressants, Darren was told he should be taking them in the morning,...

After four years on antidepressants, Darren was told he should be taking them in the morning,...

View topic summary
SHOW TEXT VERSION
PRINT TRANSCRIPT
I was put on anti-depressants ‘cos I still weren’t quite right… Yeah, and until this, until recently I only just found out the anti-depressants I’ve been taking at the wrong time, I’ve been taking them in the evening when I should’ve been taking them in the morning. All the doctors I’ve been seeing didn’t realise that, after four years, and now things are better.
So tell me what happened, what was it like? Would you sort of stay awake long periods of time during the night?
Till about 4 or 5, maybe 6 you know.
And did anyone at that point think at all that it could be to do with the timing of the anti-depressants?
No. No. They just thought I was a night person, or lazy you know. And then it weren’t until I saw the doctor recently, ‘cos I was feeling low again, and he said, “Well, what time do you take your anti-depressant?” I was like, “In the evening.” He says, “Well there’s one mistake there, you should be taking them in the morning.” I was like, “Ah.” “But hasn’t anyone told you that?” And I was like, “No.” Like that. So after four years, you know, someone should’ve told me that but…
And did you change it straight away?
Yeah. And he upped the dose as well.
And how soon did you start being able to sleep at night?
Straight away.

Darren describes his room and the daily routine on the ward.

Darren describes his room and the daily routine on the ward.

View topic summary
SHOW TEXT VERSION
PRINT TRANSCRIPT
Well, I mean, they looked after me well, and they had some good psychiatrists there and, the rooms were good as well. Nice and clean and it was a good place. The food was nice, yeah.
What were the rooms like? Do you remember at all?
Well you each had your own room and TV, comfy bed. Wardrobe, desk, your own toilet you know? It was nice.
And what was the, sort of the routine like there?
I think you were up at 8, breakfast, then, then you were doing, well you each had, you had a different timetable each day. Like, it’s like school and like you’re meant to do something educational in a class, but all I done was sit and draw. And they accepted it, you know, I’d do a drawing and they said, yeah that’s good art, so you know, so that was fine with me.

For Darren, developing depression was a gradual process and an outcome of many different factors.

For Darren, developing depression was a gradual process and an outcome of many different factors.

View topic summary
SHOW TEXT VERSION
PRINT TRANSCRIPT
I think it [start of depression] was sort of a gradual process, it was, I mean going through school and everything I went through in there, like you know going from all the top classes to the bottom, and like I said the bullying, and I mean even like by my friends you know? Occasionally being bullied and that. All the side effects of the tablets, you know, like the acne and the shaking and the boils and the, you know everything, I got bullied for all that and, it all affects, all affected and like, what’s the word? All affected my…
Self confidence?
Yeah, confidence yeah. It all affected my self confidence. It was just gradual through school and through college as well. You know up until that point when I, with my friend you know, done that to me and then meeting that girl, and you know it all just kept going wrong. Oh, so I didn’t really live a good life.

Darren describes his suicide attempt as a cry for help.

Darren describes his suicide attempt as a cry for help.

View topic summary
SHOW TEXT VERSION
PRINT TRANSCRIPT
I think everything just kind of just piled into one, just got on top of me and that was it, I just thought “I can’t live anymore, blah blah blah blah,” and I just, I just tried to kill myself but, I think there was just something inside of me that said, just saying no. I think it was more of a cry for help and I wouldn’t do it, and I called, well I think I texted my Mum and Dad, and I told them what had happened and they both come home and they said, they said that I needed help, and after that we started calling hospitals and, and yeah I went into [hospital name], or the local hospital an stayed in there which wasn’t nice. It was [hospital name] mental unit that I stayed in for a while, again which wasn’t nice. Saw some unpleasant things in there.
Previous Page
Next Page