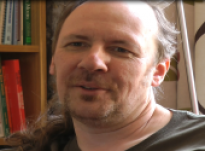 James and his partner were expecting their first baby. She was 12 days overdue when they went in to hospital. His partner had a long exhausting labour, before their daughter was born. She was fine, but as the baby was born he sensed a change in the atmosphere in the room, and was ushered out. He was left keeping an eye on their new born, as doctors fought to save his partners life. She had developed amniotic fluid embolism (AFE), a very rare complication of pregnancy in which amniotic fluid, fetal cells, hair, or other debris enters the mother's blood stream via the placental bed of the womband triggers an allergic reaction, and was haemorrhaging.
After several hours, doctors came to tell him what was going on, that it was touch and go, and that he should go home and rest as his partner was going to be sedated in ICU for 24 hours. He left their baby in special care (which felt very strange as she was fine, and the other babies were not) and went home to rest. Next morning he received a call to say that his partner was awake. He went in to see her and the baby. After a couple of days his partner was transferred out of ICU to a room in the maternity wing, where they could all three be together. But she was still undergoing lots of tests, and the maternity ward was not the place for her to get the care she needed. She was transferred to a haematology ward, and James was discharged with the baby home. This was a steep learning curve for him, to take on the full care of a new born. His partner was in hospital for a further 12 days until she was allowed home. He was exhausted and felt he was not given enough support or warning by the hospital, before sending him home with the baby.

And then kind of being escorted out of the theatre with [daughter]. Was it [daughter], or was it one of those wheel along kind of things or… and me being taken to this room and being sat there with this nurse. And, it’s so funny, because this would have been really clear at one time. I just remember being in this room and then someone, I can’t even remember if it was the consultant or not. For some reason in my head, I’ve got a bloke and a woman both coming in and talking to me, and it might have been that a nurse came in and then the consultant. There was a female came in. Kind of saying a bit of what the problem was. I don’t remember what, what they said the problem, but I can remember me saying, I remember it being kind of you know, very vague medical speak, and I actually had to say at the end, “So there’s a chance she won’t make it?” I think I just wanted a meat and potatoes kind of conversation. I didn’t want some fancy words. I kind of, “What, so there’s a chance she won’t make it?” And, and they actually said, “Yes.” I can’t remember if I said, “What is the chance… the situation.” I remember, I mean my head, sort of it was 50/50 as if that was kind of what I’d been told. That wasn’t something I had worked out, because I didn’t have enough information for that, so I think they would have said, it’s sort of 50/50. But that, that information only came because I’ve asked for it.

James's partner had to stay in isolation. His daughter was well so the hospital asked him to take...

James's partner had to stay in isolation. His daughter was well so the hospital asked him to take...

View topic summary
SHOW TEXT VERSION
PRINT TRANSCRIPT
Yes, but it was a really sudden thing because they suddenly decided for [partner] to go into this isolation ward and they said, I was like, “Well what happens with [daughter]?” And they said, “Well she’ll go back down to the child thing.” And then suddenly they kind of said, “No she can’t go in there.” I think it turned out that there wasn’t room, but they also said, “It’s dangerous her being there, because she might catch something being in there.” I wasn’t sure if that was an excuse because they just didn’t have the capacity. But I remember within about half an hour they said, “You’re leaving the hospital.” And I remember thinking well I don’t even possess a bottle, or any milk, and I actually had to go out from the hospital and go to like one of these crummy little, you know, like a Tesco Metro thing and they happened to have some baby milk in, and then I had to go like to some other crummy little chemist. It wasn’t a main chemist or anything, and trying to like looking to see if they’d got any bottles and then got some bottles.
And I rang up a friend, and I kind of said, yes, because like my partner’s sisters were on sort of standby but they, you know, they, they live hours away, you know. Because I remember ringing my friend and I can’t remember if may be I had texted him over time, like sort of let him know what had happened, but I kind of said to him. I mean he’s got three children, and I remember saying to him, “I’m going to come home. I’ve not slept probably for three days, you know. My partners sisters are coming over tomorrow to kind of help look after her. Can you come to my house tonight to sort of do the night shift, you know, because I’m, I’m absolutely done in. You know, I can remember just having an almost. I remember taking sort of paracetamol every four hours because I just had a headache just from lack of sleep. So basically I bought this stuff.
My brother had visited and was in the hospital. I remember him helping me, you know, get [daughter] into the car. And then there was this weird journey. Because [daughter] had started to cry a bit in the car, because I think she was a bit hungry and I just thought oh God, I’m just going to get home, you know, and when I get there I can feed her and whatever, but I mean I’m just going to get home, you know. And, you know, just set off, and there was this journey with this child sort of intermittently crying and me sort of thinking oh God, you know, I hope I can park outside my house, because living in London that was a bit of nightmare and just managing to get home, get all the stuff in the house and then after about ten minutes my friend sort of turned up and it was you know, at least interesting to know that he’d got a lot of childcare experience and stuff and you know, there was this real mixture because I was, I was shattered. Obviously when my friend turned up, I partly felt obliged to talk to him. I just wanted to go to bed I think.
Hm.
And also you know, when we’re together, we’re usually quite jovial, so there was kind of the, and he was also saying his wife thought it was quite amusing that there were these two men sort of looking after a new born baby, you know, in the house together and you know, we had a bit of a laugh and a joke while I was also shattered and everything, you know. And he sort of did the night shift, looking after [daughter] [laughs].

James and his partner relocated shortly after birth, so they had to focus on moving and starting...

James and his partner relocated shortly after birth, so they had to focus on moving and starting...

View topic summary
SHOW TEXT VERSION
PRINT TRANSCRIPT
Not as a kind of specific event. I think we probably should have, or should sit down and work through it as a couple really. Because of course, as, as my partner’s health improved, we then had to pack up home, relocate, more practical stuff kind of came in, like packing up the house, was… really, you know, stressful, and then moving up here, and… you know, it was really quite difficult, and that was, you know, we had to start doing that. Yes, a month after birth of my daughter, you know.
So, you know, just as my partner was getting stronger, I suppose normally you would have probably dealt with stuff there and then if you weren’t having to move, you know.
I don’t think about it on a daily basis, but I wouldn’t say I’d put it behind me. I think there’s still stuff to be dealt with at some point. You know, the big stuff in that you know, my partner’s health you know, and the fact that she’s alive [small laugh] obviously that’s kind of been dealt with, you know, in that she’s, she’s with us and looks like she will stay being with us.
No but all that fall out, I think, well in my own head there’s kind of something in the future, there’s something where we deal with it. Either we sit down, I mean I actually wondered if this would be the catalyst for us sitting down and talking about it. Yes.
Previous Page
Next Page