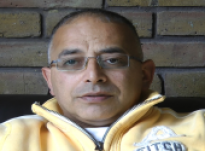 Age at interview: 48
Age at diagnosis: 48
Brief Outline: Craig's wife (Hana - Interview28) was expecting twins, her first pregnancy. At 37 weeks she started to feel very ill with suspected obstetric cholestasis. His wife's labour was induced but she was soon rushed through for an emergency caesarian section.
Background: Craig is a software engineer, married with twins. White British.

Craig was shocked to find his wife in Intensive Care. The nurses were taking her rings off (in...

Craig was shocked to find his wife in Intensive Care. The nurses were taking her rings off (in...

View topic summary
SHOW TEXT VERSION
EMBED CODE
PRINT TRANSCRIPT
So you were telling me about going over to see her in the Intensive Care.
Yes, so I walked in, and there was a young nurse and she was playing around with [wife]’s hand. All I saw was tubes out of [wife] and, and I was trying to understand what was going on, and they were taking her rings off her fingers. Or trying to. I was trying not to be hurt about it. Because nobody explained why they were taking the rings off. And I was thinking, is this it? What’s going on?
And then some head of turned up and there was a bed and I was standing on one side and they were like surrounded on the other side. And they said, “Oh have you got any questions?” And then I just stood there, and I was saying to them, “What went on? What, what brought us to this?” And they’re saying, “Oh it’s only a little problem. It was only this. It was only that.” And I’m, do you know, when they’re talking and you’re not hearing, because I was trying to stop myself thinking bad things and trying to listen what they were saying. I just couldn’t understand what they were saying to me, and I remember they spoke for about two minutes each, and then said, “Oh if you’ve got any other questions, just ask for us.”
Okay.
And then they, they went off. I just stood there. I just, I honest to God couldn’t understand how we got from a joyful experience, having children, being induced, I don’t know if that’s enjoyable for [wife], but, for me, it’s sort of bringing new life in the world. It was a thing to be, you know, in amazement to, and this sounds awful, but I don’t care about the children, what about my wife? You know. You know.
And all going through my mind was how am I going to cope without [wife]? Because I actually thought she was dead. And they were, you know, just holding her on a life support machine until such time. Because nobody turned round and said, “Oh she’ll be okay shortly or…” And you know, and… I just stood there, probably for about an hour. Just stroking her hands.
And then a nice nurse came in and said, “I think it would be nice to take some pictures of the babies. We’ll put them around her bed. So you know, I’ll print them off and I’ll put them round the bed. With your permission. Would you like to come and see your children, and take some pictures.” I went, “Yes. Yes. I think so.”
So we took some pictures and put them on the bed, at the end of her bed so when she, when she woke up, she’d see them. And of course I thought they were just doing for, you know, some other reason. And I can’t even remember what the reason was, because for me [wife] was in major trouble. You know, it’s awful.

Craig talked to his GP about a vasectomy as his wife’s experience was so awful they did not want...

Craig talked to his GP about a vasectomy as his wife’s experience was so awful they did not want...

View topic summary
SHOW TEXT VERSION
EMBED CODE
PRINT TRANSCRIPT
But ours was particularly awful. So much so… we decided we would never have any more children.
Is that a decision you’ve taken since having them?
Yes. It’s probably, half of it’s probably the experience we went through. I went and had a vasectomy, because I don’t think I could cope with going through anything like that again. Ever.
When did you take that decision?
Probably when the kids were… five and a half, six months. I sat down with [wife] and I said, “You know we’ve been graced with two children. I couldn’t take the risk that something bad would happen. And we should be grateful that we’ve got the two. So quit while we’re ahead as it were”.
Yes. And are you comfortable with that decision?
Yes. Very much so, very, very much so. We also read that another little feed into is that the contraceptive pill has a chemical in it that isn’t good for [wife] cholestasis as well which could do her harm really. So contraception, contraception has to be seriously thought about, and probably the easiest one was a vasectomy. So that’s what we opted for. Yes. We thought about it for quite a while.
Yes.
And again I talked to the GP and you know, he was very reluctant to recommend it to be honest. Simply for the fact that the children are so young. Evidently they don’t recommend that you have these things done until the kids are over a year or something.
Okay.
Yes, just in case there’s an issue shall we say.
Yes.
I explained to him why and kindly he agreed.
And do you think a large part of it was this was a frightening experience for you?
Absolutely. Yes. One hundred per cent.

Craig was not able to sleep for 2 ½ weeks after his twins’ birth, haunted by flashbacks. He was...

Craig was not able to sleep for 2 ½ weeks after his twins’ birth, haunted by flashbacks. He was...

View topic summary
SHOW TEXT VERSION
EMBED CODE
PRINT TRANSCRIPT
We went back and saw the surgeon. Who was dealing with it. She’s quite an important lady because everybody stands to attention when she’s walking around. And immediately you knew, that’s right, immediately you felt that there was a cover up going on… I mean majorly so. It’s only when I turned round and said, “Are you scared we’re going to sue you?” Or something. “Because that’s not our intention whatsoever.” “We just want…. I just want answers, because I’m not sleeping at all. I close my eyes and I then see, see what happened and you know, I need, I need somebody to explain to me in layman’s terms, exactly what went wrong and what brought us to this outcome really.”
Yes, it’s probably the most stress I’ve ever been under. For the first probably four months, I just thought I was going to have a heart attack at any stage. I... I don’t think people can understand until it happens to them how stressful it is. Childbirth in general can be, for the male can be, I can only talk from the male side, can be very stressful. Because we’re there for the ride really. We’re not, you know, stroking our wife’s back, and saying what a wonderful job she’s doing and you know… you’re a passenger aren’t you on the whole, on the whole child birth thing.
But ours was particularly awful. So much so… we decided we would never have any more children.

Craig's wife needed an emergency caesarean to deliver their twins. He'd been told she had stopped...

Craig's wife needed an emergency caesarean to deliver their twins. He'd been told she had stopped...

View topic summary
HIDE TEXT
PRINT TRANSCRIPT
All I could hear was “Crash theatre one. Crash theatre one.” Being echoed and I knew we were in theatre one, so my immediate thought was I’ve lost my wife Or you know, I’ve lost one or both the children, or everybody. I was in pieces, absolute pieces. And I poked my head out of the room and some young lady came up and said, “Oh you’re in the way there. Can you go back in the room.” And I asked her to come in the room, and I just explained to her that I’d been stuck in here for well over an hour, well it felt like two days, but I’m sure it was a very short time, and that I was getting quite distraught and if somebody didn’t and see me very soon, then I’d start shouting and screaming, until somebody does come in and talk to me and tell me what’s going on with my family.
And then a sister turned up and said, “Oh there’s been a problem. Everything’s okay, but there’s been a problem.” And that my wife had been ill when she was being intubated. And she’d stopped breathing. So immediately it goes through your head, oxygen starvation, brain damage, blah di blah. She said, “Stay in the room, and we’ll give you a shout, when they’re coming out the operating theatre.”
And I was asked to come up, stand outside the operating theatre when everybody went past. So I saw the children go past. And probably didn’t really recognise the children to be honest. I just saw two little things going past. Didn’t really pay that much attention to be honest, because I was a little bit on the freaked side about my wife because I saw her getting wheeled out and she had tubes coming out of everywhere and there was lots of blood and stuff, and I just didn’t know what was going on. You know, people can tell you, for a nurse or a doctor, or a surgeon I should say, they would have experienced this before, they’ve seen it before, they understand it. But a drop of blood will go, will make, you know, make a spot this big, but for me, you know, seeing everything covered in blood and everything, I thought somebody was dead.
Previous Page
Next Page