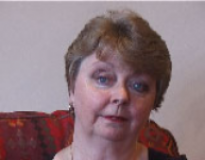 She explains how her partner's support helped her cope with 6 major cancer operations.

Show in context
SHOW TEXT VERSION
PRINT TRANSCRIPT
He's been very positive, very encouraging, hasn't given me any sympathy. He feels that that is the most important thing. Sympathy, you can't have sympathy with something like this, it's a war, it's a battle and you have to fight it.

So how has he supported you?

Did you ever get to a point, I don't know, half way through or something, where you thought, I cannot face another operation?

But it must have been exhausting keeping your spirits up.

the experience of it.

How did you do it?

Well um, again I have to say, my partner. We've had wonderful holidays. I went on, on a cruise, Caribbean cruise. I've been to Hawaii, and all these things have kept me going.

She explains how she coped with 6 major cancer operations.

Show in context
SHOW TEXT VERSION
PRINT TRANSCRIPT
How did you feel when it was discovered that you were going to have to have another operation?

It, I, it's very difficult to explain really. I didn't, I just knew that I had to, whatever they said that I had to do, I had to, I had to carry it through. Because I knew that once they'd done the operation, once I'd got the other side of that operation I'd be alright.

And I said that to myself every time. And I said it to people, to friends. You know I said, well when I, when the time was veering very close to, to actually going in to hospital for the next op, they'd say to me you know, "How are you feeling?" "I'm frightened, but I know that once I'm the other side of the operation I'll be alright."

Explains her difficulty in getting sound advice about diet after her ileostomy was reversed.

So you had constant diarrhoea?

One nurse told me, "Well just eat what you want." Another one told me "Well I'm sure that if that, because you've had the bowel problem, you should be on a high fibre diet." The dietician didn't even know. And I thought where am I going? It was quite frightening.

The only way that I resolved that was having spoken eventually to, to this stoma nurse, or the stoma sister and she said "Just take things steadily, don't eat too much fruit, don't eat anything that's too high fibre because everything, obviously too high fibre is just gonna go straight through you. You're just going to have to be very careful. Start to eat certain things. If they don't work leave them alone for a little while and then reintroduce them."

And that was the only way that I got this to, and also the muscle obviously had to learn, all the muscles had to learn that, you know, there had to be some control there and because of not having a rectum it had to be the muscles. I had to get the muscles to work, to tighten up, to keep the control.

Initially she felt unable to deal with her ileostomy but eventually came to terms with it.

Show in context
SHOW TEXT VERSION
PRINT TRANSCRIPT
Oh God it was dreadful. The stoma nurses I have to say were excellent, but I found it very difficult in the sense that she would come to me and she would take me to the bathroom in the mornings and during the course of the day to deal with this. And I said "I can't look at it."

And then another couple of days afterwards she said to me "I want you to change it today." I said "Oh I can't do that." She said "Yes you can." Yes you can.

And I did do it. I suppose, and in, in time once I'd actually got home and, in my own environment and had to deal with it, you just do. It wasn't pleasant, I didn't like it, I hated it.

She stresses the need for people to be offered detailed information before surgery.

Show in context
SHOW TEXT VERSION
PRINT TRANSCRIPT
I have to say that every step I took I didn't really get the information that was required.

Having gone through all this, I feel that it is now so important that patients having to go through journeys like this, hopefully there aren't many people that would have to go through what I've gone through. But even a straightforward bowel resection it needs, there, there's a lot of need out there to explain to these patients.

She remembers her fears before the first of many cancer operations.

Show in context
SHOW TEXT VERSION
PRINT TRANSCRIPT
The first operation, obviously I was very, very frightened. I'd never ever had an operation before, never. I didn't know what to expect. The nursing staff the night before I, I was sitting in, on the bed and I was absolutely petrified and the nurse came to me and she said to me "What's the matter?"

And I said "I'm petrified." She said "Well you know, everything's going to be fine, you're in good hands," etc., etc. Yes, that's fine. I was in good hands. I knew that, but that wasn't telling me what to experience, what to expect.

Her partner's supportive attitude helped her overcome her fears for their relationship.

Show in context
SHOW TEXT VERSION
PRINT TRANSCRIPT
And of course another thing that I was concerned about, was it going to affect my relationship? And she said that "Oh don't worry about it, we can get you a nice little sexy little, bag to put over the top, you can buy black lacy ones you know!"

For the stoma bag?

'Tis for the stoma bag yes. But I didn't actually venture into that! I was very fortunate, my partner was wonderful, and just accepted it, but uh.

Do you think it was harder for you to cope with the physical side of your relationship with the stoma, than for your partner?

How did you get over that?