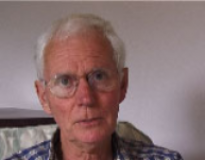 Age at interview: 65
Age at diagnosis: 35
Brief Outline: Diagnosed with colorectal cancer 1971. Under went surgery and a permanent ileostomy.

Describes how he became an accomplished sportsman after his ileostomy.

Show in context
SHOW TEXT VERSION
PRINT TRANSCRIPT
Well a friend of mine decided well you're gonna get fit now and start to do things so we took up swimming, my wife as well. And one thing led to another, from swimming we took up scuba, snorkelling and from that - to cut a long story short, I took up diving, scuba-diving.

I then took on, I did a commercial diving course and I qualified as a commercial diver although I've never done it commercially. I ended up by being a diving instructor for the British Sub-Aqua Club and that gave me great satisfaction to do that.

'Cause I can do anything, I can play football, I've even taken up skiing, I can ski, I, I'm quite a good skier now. And I've taken up uh, I'm the cameraman now for the local ski club and when we go skiing I, I'm the one on the slope with the, with the camera. And I'm skiing and I can ski backwards, sideways and do all sorts of things, as long as I've got a camera in my hand I can ski anywhere.

The ileostomy does not make any, one difference to me at all.

I mean I look at myself and I say well I've been a diver, uh, I'm a master mariner, uh, I can sail anywhere and I can ski anywhere. I couldn't do that before my operation, and then after me operation look what I can do! I can dive, I can ski and I can sail a boat anywhere in the world. I mean I couldn't do that before. So it's probably done me a favour.

Describes how his stoma was pushed back into place after a prolapse.

Show in context
SHOW TEXT VERSION
PRINT TRANSCRIPT
What happened with your prolapsed stoma, how did that get resolved?

It got pushed back in again!

Yes. Can you just explain what they have to do to fix it?

Well that's quite it's the doctor tried, because it happened here in this actual room, like it, it suddenly came out, the doctor came and couldn't get it back in properly so they took me to hospital. And I just lay down and they gradually eased it back in. They thought I might have to have an operation but they tried it first and it went back.

So they just physically pushed it back in?

Physically pushed it back in again, gently, with the gel and stuff, gradually pushed it back in and it's amazing it didn't bleed when they did that as well. It was amazing I expected to have blood everywhere but it didn't bleed, they were so gentle with it. I think they put a, I think they had sort of tubes sort of thing, if I can remember rightly, that they did. But they do a lot of pressing and pushing and it, it went back, it must have been the skill of the person doing it really.

He feels that there is no substitute for personal experience of life with a stoma.

Show in context
SHOW TEXT VERSION
PRINT TRANSCRIPT
The stoma nurses are very good, they'll tell you what appliance to use or what's the best appliance. And they do say, go through different appliances to see which one suits you because one appliance won't suit another person.

But when you're speaking to somebody who is from the Ileostomy Association or whether they've, they've got a stoma, at least you do know that they, they know what they're talking about for one thing because they've got one.

And there's a little incident, there's a friend of mine who's across the road from here who's also had, I think he had a colostomy I think.

Anyway he had to have a stoma, and they let him out of hospital and they thought great he's OK and then there's things they forget to tell you like if you touch your stoma it'll bleed a lot, and bleed a lot. And they didn't tell him this and he happened to touch his stoma and he phoned me up in panic because he's only across the road and he knows I've got this. And he said "Hey what can I do?"

And of course I could go round straight away and say "Oh yeah, nothing to worry about that, that'll stop quite quickly, but if you do touch your stoma it will bleed." And nobody told him about that. And nobody told me about that actually until I actually touched my stoma once and it bled. And they wouldn't know that unless they'd actually experienced it would they?

Meeting other people with ileostomies gave him encouragement.

Show in context
SHOW TEXT VERSION
PRINT TRANSCRIPT
Well next thing then is feeling very sorry for myself because I've got this blinking, I've gotta wear this bag and I've got this thing sticking out of me. And you feel as though you're a sub-human and I was in a very, very low state at the operation and in recovery. And this girl came down in, down the ward in a trouser suit, a very slim lady, very smart and she came to me and said "I've got an ileostomy" and I looked at her and I could see no sign of anything.

That gave me a lot of hope. I was very desperate at that particular time after the, I thought it was the end of the world for me. But then as I recovered I found that I was out of pain for the first time for about five or six years. I hadn't got any pain anywhere, after I recovered from the operation that was. And life was beginning to come back and that was, I'd forgotten what life was like.

Explains how an ileostomy improved his life.

Show in context
SHOW TEXT VERSION
PRINT TRANSCRIPT
Well basically the first problem was looking for toilets. I had to go to the toilet rather a lot and I therefore basically know where every single toilet is in Birmingham, or I did then, in the 1960s.

And it must have been about I couldn't even take the kids to a football match, I couldn't go on a bus, I couldn't travel on public transport because there wasn't, obviously there wasn't a toilet anywhere near.

If you had to go, you had to go quick. Life was hell really and then I started being in great pain, and I had about a year of, two or three years of a lot of pain.

So in a way the ileostomy actually improved your life?

Yes, definitely. Oh, I had a new, I was a born-again person really because of the ileostomy. I could do things I hadn't done for ten years. And it grew from there really. It gave, it opened all sorts of things for me.

There is me, now I could walk down the road, go on the bus even, I hadn't been on a bus for five or six years. Go on a train, wonderful. Daren't go on a train. Especially if it's a closed-in train with no toilets or anything like that. In fact I didn't go on a train at all for, I couldn't go in an aircraft. I couldn't go anywhere before. And here's me now, I could go anywhere, do anything no problem' skiing, diving and sailing.

Describes how his stoma affected him psychologically and reflects on how it might affect others.

Show in context
SHOW TEXT VERSION
PRINT TRANSCRIPT
I think psychologically they don't tell you the effect it can have on you.

What is the effect?

Is, the fact is that when you've got that stoma you feel as though you're a bit unclean, it's a bit unfair for your wife or husband, if ever it, whatever way it is, like sexually to think oh, you must look an awful thing with that bag hanging on you.

It's uh, that is a, I think that is for every person their own individual thing you know. I mean it could be repulsive for the partner I should think. And my wife says it doesn't make any difference to her, whether she's just being kind to me I don't really know but I mean I've only got her opinion on that.

But I should think it must be a horrible thing.

I don't, from what I've learnt from the Association, the Ileostomy Association that isn't the case you, you get partners and a lot of people are happy. But that, that's a thing I can't really make much comment on really apart from myself.
Previous Page
Next Page