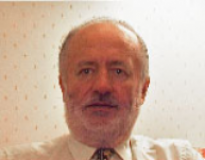 He felt he received excellent information before surgery.

Show in context
SHOW TEXT VERSION
PRINT TRANSCRIPT
I was called in to see the consultant surgeon on the Monday morning and I was very impressed, he must have spent an hour to an hour and a half with my wife and me explaining what would be removed and uh the operation and that sort of thing, and said that judging by the results of the barium enema I would be unlikely to need a stoma or if I did, there would be about a 10% chance of needing one and that might not be permanent.

I had to stop taking the iron tablets a week before the operation otherwise, from what I can gather, it would have been like him trying to do an operation inside a chimney that hadn't been swept.

I was shown a diagram of my insides on white boards so that he could use one of those white board markers in order to show which bits would be cut out and reconnected. I was,

Is this the surgeon?

The surgeon himself together with the stoma sister, although they didn't think that I was going to need a stoma. I was told about the various tubes that would be coming out although I don't think I quite understood what they were all for, if I did it just went over my head.
Previous Page
Next Page