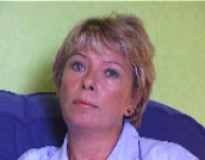 Age at interview: 47
Age at diagnosis: 38
Brief Outline: Diagnosed with colorectal cancer 1992, under went surgery and a temporary colostomy.

She regretted her decision not to tell her children she had cancer.

Show in context
SHOW TEXT VERSION
PRINT TRANSCRIPT
I think which was a terrible mistake that my daughter unfortunately overheard and, I think that made her very angry and I think I underestimated the intelligence of my children and caused them greater concern by not being honest with them.

My son went through a long, long period, a number of years of, of not being able to sleep very well and being frightened that I was going to be taken away from him. And I think a lot of that may very well have been born of the fact that they knew something more was going on than I had told them and I believe that made them insecure.

But on reflection not even knowing exactly what the outcome would be, it would have been better to have sat the children down and explained to them precisely what was happening because even at their ages of six and nine, their imaginations must have been going mega-time. And that wasn't being the right, that wasn't the right way to have dealt with them.

I think that people need to make their children aware that there are many cancers and situations with cancer that you are fully cured. That to explain it through to the children and the process and maybe even have the children understood that their, their being there for you and everyone working together is important.

Explains how she resolved to restore her eating and bowel habit to normal.

Show in context
SHOW TEXT VERSION
PRINT TRANSCRIPT
But I resolved on Christmas day that my body was going to learn to accept all foods again, that I wasn't going to allow my system to become so used to being without certain foods that I believed that would then create a more, a greater difficulty further down the line.

So, yeah I went through some funny times getting my body to accept foods but I can eat anything that I want now, I have been able to for a considerable time.

Well there were days that you were back on the loo more frequently than you want to be. There'd be other periods of time that you became all sort of constipated that just felt as though your insides were all blowing up because you couldn't pass. And it would be swings and roundabouts going from one, one reaction to the other.

But I am so grateful that I have my health back and that I am bringing up my children. If I have the irritation of having to go two or three times one morning because of something I've eaten the day before or if I'm uncomfortable for a couple of days because I'm constipated.

If, if I've got to put up with minor inconveniences because of something that I've eaten the day before, so be it. It's not really that hugely inconvenient to my life, it doesn't stop me going out that day, it doesn't stop me getting on with my business and enjoying my life. My quality of life is far greater than, than worrying about some irritations of the bowel habit.

She was anxious to regain a sense of privacy after having a colostomy.

So you're talking about when the bag was being changed?

Not all the time, but when the bag was being changed?

No, no, just purely when the bag was being changed. So I think within one or two days I was dealing with it entirely myself and that initial smell that was in, in the bag very quickly went and I think it was purely because a lot of the system had been lying dormant for a period of time and it was when, see when you have this operation one of the things is that your insides fills with quite a lot of gas.

For this woman and her husband, resuming their sexual relationship was part of the healing process.

Show in context
SHOW TEXT VERSION
PRINT TRANSCRIPT
Do you have any idea of how your husband felt about your stoma?

He was very good about it he didn't find it difficult to cuddle me we did have intercourse during the time that I had the stoma and he saw it as something that was aiding me to get better as opposed to it being an invasion on my body that he found unpleasant.

Did the stoma nurse or anyone else offer you advice about how to manage the physical side of your marriage with a stoma bag or did you figure it out for yourself?

Pretty much figured it out for myself. The person that was my stoma nurse actually had a permanent stoma herself and she had told me how quickly she had been able, she had so much control that she didn't even need to use a bag, wear a bag all the time.

So I knew that there was this path that I had to go along from something that I found quite abhorrent to begin with to something to deal with and to get along with and I was fortunate it wasn't going to be permanent although there was always that slight chance that to get complete comfort the option would be best to stick with a stoma.

But I was determined to get along with it and try and not treat it as an alien that was just going to constantly upset me.
Previous Page
Next Page