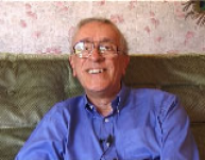 Explains how he came to terms with the prospect of dying.

Show in context
SHOW TEXT VERSION
PRINT TRANSCRIPT
I also had to come to terms with the prospect of dying. I hadn't expected to die, based on my family history, I hadn't expected to die for perhaps another 20 years, 20, I was expecting to live into my late seventies or early 80s and here I was at 57 with possibly only six months to live, so that was a bit, a bit outside my plans.

Um, luckily we've had the sort of life where we have tried to pack as much in as possible. I call it luck but that was our decision, so maybe it wasn't luck.

And what I did was write a balance, what I call "a balance sheet of life." I, I wrote down, I wrote down all the things I regretted that I would be missing and they just amounted to eight, eight things basically.

But I also wrote down all the achievements, all the happy memories and that came to over a hundred things. So I was able to look at this and say "OK if I've gotta die, I've had a damn good life."

He reflects on the impact his illness has had on his two teenage daughters.

Show in context
SHOW TEXT VERSION
PRINT TRANSCRIPT
I then had to tell the daughters. My eldest daughter is 19 and she's very independent. She assimilated the news, just gave me a hug and just said "Let me know if there is anything I can do to help you."

The younger daughter's only 15. She acts like an absolute hard-case but underneath she's quite sensitive and the impact on her I knew was going to be much harder because um, I'm one of the few people that she admits to respecting. I think her head teacher, one or two other people but she doesn't have a lot of respect for a lot of people um, she's pretty, she's on the verge of being a little bit wild but underneath she's basically good. And she knows that she needs my controlling influence even though she doesn't, doesn't like it, she knows she needs it!

She took it very stoically and again, she gave me a hug and said she understood but I think it must have been a huge blow to her, a huge blow. She has a, a close friend whose mother died of cancer about three years ago and she's seen the effect it's had on her friend. She's 15 and I can only guess the effect it had on her, but she wasn't gonna show it.

Describes his cycle of reaction to and recovery from chemotherapy.

Show in context
SHOW TEXT VERSION
PRINT TRANSCRIPT
I'm in hospital for one day, I come home in the evening attached to the infuser. On the third day I'm able to drive myself back to hospital to have the infuser removed. I have the injection on day one and take steroid tablets for three more days. These tend to make me a little bit hyper, lots of mental energy and a certain amount of physical energy. On day four the steroids wear off and I tend to slump into a, a pretty comatosed and weak state.

[This] debility tends to last on days four, five, six, seven, maybe into eight, but from day nine onwards my strength returns, my energy returns and I gradually build up again and get back, you know, towards my best ready for the next cycle of chemo. So it's a very predictable pattern now and I can plan my life round it.

So, you can build your life, once you know how the treatment is going to affect you, you can build a life round that and feel very much that you're living a normal life again which is, is great.

Explains that he was happy to have chemotherapy as it was his only option.

Show in context
SHOW TEXT VERSION
PRINT TRANSCRIPT
I faced the prospect of chemotherapy not with trepidation because it was my only choice, it was lovely. I have a friend who has prostate cancer and he's looking at all the choices he has and it's very, very difficult for him to make a decision. With me there was no decision, it was either have the chemo or die. It was as simple as that so it was a very easy decision.

I had heard a lot of, you know, negative things about chemo, people who have had bad experiences. My own father had had a session of chemo for lung cancer and he had told me that if they offered him any more he would refuse it because he had such a bad experience. I've heard the same from other people.

It also involved of course intravenous injections which is, is not one of my favourite subjects, but I was in a very different circumstance, I felt that I was very, I could relax myself very, very much I didn't know what was gonna happen but it was my only choice so I went with it and I had to make the best of it.

He is aware that one day his options will run out so he focuses on the present.

Show in context
SHOW TEXT VERSION
PRINT TRANSCRIPT
So we're, we're pushing ahead. Again the conversations have been very frank at some stage the cancer will stop responding to this chemotherapy.

When it does my consultant has, says he has some other options, I'm sure he does, they may not be as effective as this one but we will then have to try the other options.

When we run out of options then you know that could be the end of it but his objective in the meantime is to not only give me length of life but quality of life and that's, that's really what he's been achieving.
Previous Page
Next Page