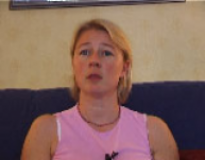 Persistent problems with her bowel habit left her unable to resume her teaching career.

Show in context
SHOW TEXT VERSION
PRINT TRANSCRIPT
I've actually never been back to work since I was on maternity leave so I suppose, and my husband salary has fortunately compensated for that so no.

Do you think that you'll go back to your job one day?

Because of the stress?

Mm yes because er, and because on the physical side of things. I mean it may alter I don't know but up to now I like to be able to go to the toilet when I need to go. I can't hold on as such you know, so from a physical point of view I don't see myself being able to do it.

And also from an emotional point of view, from a stress point of view. And I do know that stress alters my bowel movements so I think I'll have to try and avoid that as much as possible.

Going to a cancer clinic for chemotherapy made her confront her own situation.

Show in context
SHOW TEXT VERSION
PRINT TRANSCRIPT
But when I went to the cancer hospital where I had my chemotherapy, that's really where I had a real sort of smack in the face actually. The first appointment I had there was devastating really.

The whole experience of going to a cancer hospital still stays with me now. It was only an out-patient's appointment but er I found the whole experience very sort of, very upsetting. You see a lot of very ill people and they're very obviously ill.

I think actually one of my main concerns was "am I going to lose my hair?", that was one of the first things I said which is so trivial, when you think back, when I think back on it. I think I don't know why on earth I thought that was a problem but at the time it was really important to me that nobody else, that I could get away from it, that nobody else would have to know that I had cancer, that you know I could walk down the street or go to the shops and nobody would really know there was anything wrong and that was quite important to me.

She realised what was wrong when she saw a piece about bowel cancer on television.

Show in context
SHOW TEXT VERSION
PRINT TRANSCRIPT
I went to the GP and she thought I had something like an irritable bowel or piles or something along those lines so I had quite a lot of drugs sort of like codeine and things to try and settle my bowel down.

She did agree then to refer me to a specialist but the appointment was quite a long way away so I decided to go privately. So I went privately to see two consultants both of whom thought, one thought there was a bit of a problem but would probably settle down after I'd had the baby and the other one really thought I had an irritable bowel or something along those lines.

When I had my baby that was in September, obviously I was very tired still but then you assume that, when you're a new mother you assume that you're going to be tired anyway and the symptoms continued.

I'd actually seen something on TV which really made me concerned. She'd actually had bowel cancer and she was explaining that she ended up, by the time she was had seen something, by the time that she'd actually realised there was something really wrong she was saying that when she was going to the toilet it was like sort of a tube of toothpaste and I know that sounds a bit horrendous but that's actually what it ended up being like for me.

So I did keep going back to the doctors and they thought there was nothing really seriously wrong but they did book me in for an appointment finally to have a barium enema which was in the December.

She feels her GP over-reacts now that she has had cancer.

Show in context
SHOW TEXT VERSION
PRINT TRANSCRIPT
And this is another thing that I have found since I've been ill that people now, from not actually listening to me at all I felt, before I was ill, when I went to the GP so many times with these symptoms which were serious symptoms and really I felt that no one was actually listening to me, to now I get total overkill now when I go to the GP.

And as I say as I was having these migraines last year and I went to the GP and she said "Look I know you're going to be worried about it so the best thing for you to do is for me to refer you to an oncologist and they'll see if there's anything wrong, if you've got a tumour in your brain or whatever."

So that's what happened so I ended up having a CT scan and of course everything was okay. I mean understandably you're under a great amount of stress so of course you're going to get migraines, it's going to come out in one form or another.

So I do find that overkill, I think it makes me more anxious than is necessary and yes I can appreciate why GPs react like that now because they don't want to miss anything. They're trying to I suppose relieve any anxiety I've got but at the same time I think it would be more helpful if they just said "Look you've got a migraine you know you haven't got a brain tumour," without putting me through all this extra stress of going to see you know an oncologist again, of having a brain scan. All these things are stress that I don't think I actually really need. So I think I do get, that's slightly frustrating.

She had to choose a course of action that would suit her as a new mother.

Show in context
SHOW TEXT VERSION
PRINT TRANSCRIPT
He said that almost certainly it was in, that the cancer cells were in my blood stream so I definitely needed chemotherapy. He said the fact that, oh it had actually spread as well from my large bowel into my small bowel, that was obviously the pain that I was getting across here, that it had spread and it had it affected the lymph nodes as well. He said that taking that all into account your chances of not having a recurrence were about 30% at the time.

Taking my age into consideration he said it was about 50'50 of having a recurrence and I hadn't realised it was as serious as that.

He explained that I had two options. One was 5FU which would have, was one injection a week for 30 weeks or there was a new drug that they were trying out which was a much more aggressive one which I think would've only have been about eight weeks worth of treatment I think.

I know it was much more, had much more severe side effects but really I took his advice he said "You know you've got a young child," she was only about nine weeks old at this point, nine, ten weeks old you know he said "You want some quality of life. So I think, I think if I was in your position that's what, I would go for 5FU. There isn't particularly any proof to say that this other drug has better results so you're probably better off going with the one that's been sort of tried and tested." So that's what I did.
Previous Page
Next Page