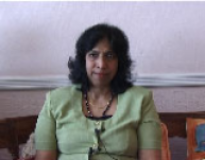 Wishes she could attend a support group specifically for colorectal cancer patients.

Show in context
SHOW TEXT VERSION
PRINT TRANSCRIPT
I was given a few booklets by the stoma nurses about what would happen inside and the diet and so on but apart from that, I feel at that point I could have done with a lot more information and perhaps support group.

I'm still very desperate to be part of a support group which the Colon Cancer Concern is now in the process of trying to set up a group. I've been to several sort of groups where there it's for people with cancer or who have had cancer but I feel that it was not colon cancer. And each part of the body is of course different. Everything is sort of difficult, painful, hard but then what I would like is to talk to other people about what they are going through after the operation.

What they have taken that's helping them with their bowel movement and to be able to exchange ideas really and I think that is very important. I would like to see more, like to see support groups for bowel cancer set up in different areas so that people can go there and get the information or as a group they could then seek some sort of advice or information.

She was extremely weak after surgery.

Show in context
SHOW TEXT VERSION
PRINT TRANSCRIPT
Well physically I was totally incapable, just couldn't feel anything. The first feeling was like I had tubes stuck out from different parts of my body and I thought, "gosh I was well yesterday, I was perfect and look what they have done to me".

That was a terrible sort of feeling and I couldn't move. It was even a big effort to move a part of me, part of my body and I was very, very, very upset and you know disturbed.

The physiotherapist came every day to make me stand and sort of move my muscles a bit so that I wouldn't have other problems due to the sort of not moving around. I think it was about four or five days before I could like stand for a few minutes just even while they like changed the bedding. I couldn't like stand without holding on to someone or to something. But they made me sit on the chair for a little while, but I got tired very easily. I would just fall asleep talking to people.

She wishes she could discuss diet and bowel habit with other colon cancer patients.

Show in context
SHOW TEXT VERSION
PRINT TRANSCRIPT
I'm still very desperate to be part of a support group which the Colon Cancer Concern is now in the process of trying to set up a group. I've been to several sort of groups where there it's for people with cancer or who have had cancer but I feel that it was not colon cancer.

And each part of the body is of course different. Everything is sort of difficult, painful, hard but then what I would like is to talk to other people about what they are going through after the operation. What they have taken that's helping them with their bowel movement and to be able to exchange ideas really and I think that is very important.

I would like to see more, like to see support groups for bowel cancer set up in different areas so that people can go there and get the information or as a group they could then er seek some sort of advice or information.

She didn't understand that the change in her bowel habit might be permanent.

Show in context
SHOW TEXT VERSION
PRINT TRANSCRIPT
I think I probably needed to know more about what to expect after the operation, that your bowel wouldn't work in the way that a normal bowel works, which I think I was expecting it to once the reversal was done.

I think I expected it very much to work in the way it did but obviously it cannot because if a certain portion of the bowel has been removed er it's only with time I learned to understand that I cannot expect it and it can never be the same.

I was referred to the nutritionist in the hospital who tried very hard to see what would help me. We kept a record of what I was eating and drinking and how my bowel worked for about six to eight weeks but er I felt that nothing helped me.

I still don't know what's good for me, I still cannot er decide. I can't say "Oh if I keep to such a diet my bowel would work properly and I could just get on with my life but it doesn't.

Describes her difficulties with diet and bowel habit.

Show in context
SHOW TEXT VERSION
PRINT TRANSCRIPT
What was difficult was that since the operation I've got a lot of problem with my bowel habit. It's changed all the time, it goes from diarrhoea to constipation and that really prevents me from getting on with my social life.

On the days I feel well I feel I want to get on and do everything that is, that's possible and then there are times I would be really down, I don't know if I should eat or should not eat er because it just distressed me a lot.

I'm a person who loves travelling and that's very difficult now and I feel that if I'm going, if I'm planning to go somewhere the best way I can deal with this I do not eat anything for hours. I just stay on fluids so as not to upset my bowel or make it work. It doesn't work in one go.

When the bowel works it sort of starts to work, it starts with a lot of problems inside, a lot of contractions and the wind building up, a feeling of bloatedness and er it would take about three, four hours before it actually works properly when it does.

And therefore I cannot be out and about in that kind of a situation. So it really has curtailed my social life and I feel I'm just happiest being at home because then I've got the toilet there and I can just er be comfortable.

Her anxiety about having a temporary colostomy made it hard to take in information before surgery.

Show in context
SHOW TEXT VERSION
PRINT TRANSCRIPT
So I went into hospital and I think the thing that I really was terrified of was the stoma and that to me was more scary than the actual operation.

And so he arranged for the stoma nurses to see me and explain the site of the stoma and so on and what would happen. And I was trying to block my mind like okay I don't want to know that and I'm fortunate I have good support from family, my sister came over though she didn't know at that time but when she came over she knew about it and I told the stoma nurse "Well you tell that, you tell that to my sister," like I didn't want to know it's a matter of like saying no it doesn't exist.

When the stoma nurse came to see you before the operation what did she explain to you about the stoma?

She brought the different types of the bags, the colostomy bag, the different bags that were available and the way it would work and how often it was to be changed. She explained all that but it was very painful.

Explains how she never felt comfortable with her colostomy.

Show in context
SHOW TEXT VERSION
PRINT TRANSCRIPT
That to me was the biggest blow, the stoma bag. I couldn't bear to see that I had a piece of something that should be inside sticking out of my skin. I couldn't cope with that and I didn't want to look at it.

However I dealt with it, it was six weeks that I had the stoma. Went back after six weeks to check if that had all healed inside because my surgeon said that depending on how well it had healed er that would determine if I could have the reversal after six weeks, that if it hadn't healed I would have to wait more.

So I really prayed so hard and that's one operation that I really wanted to have. I wanted to get the stoma out. Fortunately the test showed that it had healed and er so I had the operation to reverse it.

She tried to minimise the disruption to her children's lives.

We discussed with my surgeon, I told him that my children were in the middle of exams and I didn't want them to like have such a shock, could we just hold on until after the operation so that I could prepare them.

So I thought that was easier, I mean not that anything is going to be easy but it was better than saying "Well it's like cancer" and you know the big shock of it.

And despite what I was going through I just wanted everything else to be normal around me, not realising the impact it had on the others and how they were looking at me and they were trying to see if I was going to be alright.

But in all the time I was bringing myself out of my body and wanting to be, everything to be normal and wanted, wanted my children to just get on with their studies. And my daughter actually said to me "Mum I really would even give up my, not do my exams this year to stay and look after you." I said "No, no, no that's the worst thing you can do, that will just make me worse. I'll only get better if I can see you getting on with your life and with your exam and if I know that everything is going smoothly I can get better."

She experienced depression long after her surgery.

Show in context
SHOW TEXT VERSION
PRINT TRANSCRIPT
Well after a year and a half I was so determined to get on with my life that I went back to work much to everyone's surprise. I kind of felt I was alright and that I would get back to work. And I tried that for about four months but it wasn't getting any better. I was getting very tired and I felt it was setting me back er in kind of the recovery period and I was not coping well and then that made me terribly upset and angry with myself.

That's the other thing I was getting very angry with myself about a year later is when it kind of perhaps it kind of came back to me the whole, I was recollecting everything and I was reliving it and I was angry with myself for being ill and being really hard on myself and that's when I was terribly depressed and probably giving a hard time to my family.

I was getting angry with the children, with my husband. And there were times I told my husband "Just put me in a home or something you know then they can look after me."

And it's not because nobody was looking after me it's because my anger with myself for being troublesome to others and not being able to do things for myself or do the things that I should be doing.