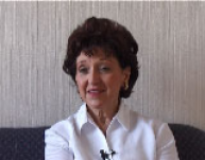 Describes the technique of visualisation.

Describes the technique of visualisation.

View topic summary
SHOW TEXT VERSION
PRINT TRANSCRIPT
It's using the mind to help the body and I'm very much a believer that we use the healthy part of ourselves to work on the unhealthy part because I am also a believer in the psycho neuro immunology that using positive messages to the brain does flow into, you know, via the central nervous system into the immune system.

And I used to use a metaphor for conquering the cancer, in visualisation. There's a process of relaxation first. You relax you whole mind and body and go to a place that's like a neutral, what I would call a neutral stimulus, a place where one enjoys being and I would go to the beach because I love the sea.

So I would find myself on the beach and then I would start imagining that I had this white clad army, so strong, that is my immune system killing off the stragglers of the grey army. So I'd see the white army get rid of the grey army, totally rid of it and then project myself into the future of

seeing myself in a year, two years, five years being well and living my life and then go back to the beach and then I'd open my eyes after counting a certain amount of time.

I'd open my eyes and the exercise was done. And it would just take a few minutes, every time I did it but it was essential because I was fighting this illness. I didn't want this enemy to overtake me.

Describes colonic irrigation and how it helped her feel more in control of her life.

Describes colonic irrigation and how it helped her feel more in control of her life.

View topic summary
SHOW TEXT VERSION
PRINT TRANSCRIPT
I think the worst fear was that I wouldn't be in control of my bowel movements and wearing a bag it could be very embarrassing. I think when I started irrigating and I felt a sense of control and cleanliness come back into my life, that made a very big difference.

I put what they call a sleeve onto the stoma so that anything that, the bowel movement moves through the sleeve into the toilet. I then insert a colotip into my, which comes from the bag, into the colostomy or the stoma and I in fact use, it's a kind of enema, this irrigation is a kind of enema, I just add, put, sorry I insert water, or flow water into it and then it's just the bowel movement starts and flows into the toilet.

And after that, I have to sit around for quite a while after that to see that there's no more spillage.

During that time I just tie up the sleeve and then I've washed it by then and tied it up. It's still on me in case of spillage and I use it to do things round the house and I might read the paper and I wait.

And after about 15, 20 minutes, sometimes even half an hour I, there might be spillage or not but if there isn't I know that I'm clean and if there is well then I just sort that out and go and have my bath or a shower and dress and go to work.

Having a colostomy left her constantly anxious about possible accidents and social embarrassment.

Having a colostomy left her constantly anxious about possible accidents and social embarrassment.

View topic summary
SHOW TEXT VERSION
PRINT TRANSCRIPT
I think the worst fear was that I wouldn't be in control of my bowel movements and wearing a bag it could be very embarrassing. I was very aware of wherever I was going and I was, that was one of my worst fears' 'Would I be in control, or would I have an accident or would anything go wrong?'

It wasn't so bad at home but at work, being in meetings so frequently, seeing patients, as well as socially it was very embarrassing and I was very, very aware of that all the time, yes. So while I was determined to live I was experiencing a lot of distress in the first few years, especially the first year.

Was the fear actually worse than the practical reality of managing it?

Yes I think it was, I think the fear was worse. I was always aware of odour or, I just generally felt very self conscious. I'm a person who'd been quite competent and confident in the past and here I was very, very self conscious, very aware of myself, asking my husband "can you smell anything?" you know all the time "can you see anything?" the whole time.

I changed clothes for the first year or two wearing fuller clothes because I was worried that the bag would swell or it took me a while to adapt and accommodate to the change in me.

I couldn't get used to bowel movements coming through the front of the body, it horrified me. But eventually I got used to it. I think when I started irrigating and I felt a sense of control and cleanliness come back into my life, that made a very big difference.
Previous Page
Next Page