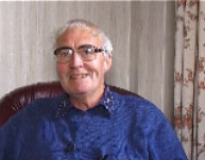 A permanent colostomy improved his quality of life.

Show in context
SHOW TEXT VERSION
PRINT TRANSCRIPT
Believe you me it was the finest thing ever happened to me. I feel better now than I've felt since before I had cancer and, Percy his name is by the way.

You have a name for it?

I don't know, well when I talk about it to anybody instead of saying, referring to my pouch I can just say, I refer to him as Percy (laughs).We've become quite attached, as they say, excuse the pun (laughs).No as I said it's the best thing ever happened now that I've got the permanent colostomy.

Well no well I don't have the adhesions any more, I don't get, naturally I don't get any discharge any more because it's, everything goes into the pouch.

I lost so much weight because that was another thing when I had the fistula and my food wasn't doing me any good they said and my weight it was just falling off me and I went down to 14 stone which you might say well that's too much anyway but I am six-foot-three. I'm back up to 16, just over 16 stone again now so my normal weight and as I said I feel great yes it's the best I've felt as I said for a long, long time.

Describes the panic attacks he had for a year after surgery.

Show in context
SHOW TEXT VERSION
PRINT TRANSCRIPT
I used to get panic attacks. This went on as I said for almost a twelve month. I could be anywhere or just answering the phone, well I couldn't answer the phone, I couldn't meet anybody I just used to simply just burst into tears for no reason at all, it was a horrible experience I can assure you.

They said it was from when I had the first surgery they said this depression and it was a terrible, you know a terrible period to go through and it went on almost a year and it was, panic attacks are one of the worst.

It just gradually, gradually went. You know it was strange, I wasn't taking any medication or anything er suddenly it just got less and less and then perhaps I might have a bout perhaps once a month and then it just eventually stopped. Strange.

He discovered that certain foods cause his stoma to balloon.

Show in context
SHOW TEXT VERSION
PRINT TRANSCRIPT
You don't eat various foods that cause a lot of wind obviously.

Well beans, brussel sprouts er those sort of things, there are several others I've got them listed.

Have they told you not to eat them?

Well you can do, it's entirely up to you er and also beer, especially lager, if you drink anything like that or fizzy drinks I mean you mustn't drink too much champagne (laughs). I mean not that I might because what happens you get what they call ballooning you see, Percy, your stoma it blows up like a balloon you see.

Did someone tell you that or did you just, did you learn by error?

So trial and error?

I thought it was going to come off and er and I thought the thing was going to blow off you see and I'll never forget she was a little Irish nurse and she said "Oh by'Jesus," she said "I'll go and get a pin and I'll prick a little hole in it to let the air out," and I was "No, no don't do that," because I had visions of her sticking a pin in and it exploding like a balloon you see.

Explains his feelings at having been left impotent by radiotherapy.

Show in context
SHOW TEXT VERSION
PRINT TRANSCRIPT
Unfortunately my sex life it ground to a halt after that because er that is the only thing, well one of the things that has niggled me ever since. The radiotherapy, radiotherapy had done so much damage in that area that it left me impotent.

No they didn't tell me this might happen no, no but you know they've said well it's just unfortunate.

No. But they've given me, told me all sorts of things and of course I couldn't, remember when the dreaded viagra came out. I wasn't allowed to have that because I'd had a heart attack, of course. I wasn't allowed to go on it anyway not that I know whether it does any good or not but there are plenty of jokes about it.

And so what's your feeling about that?

Well I have I've always felt very bitter about that mm I'm being perfectly honest with you it has it's upset me a lot to think that but then again somebody said well after my cancer operation etc. etc. you've got, and when I was going to be fitted with a permanent colostomy, you take the choice between a bag and a box.

Explains how the location of his stoma is wrong in relation to his waistband.

Show in context
SHOW TEXT VERSION
PRINT TRANSCRIPT
Okay well if I can just explain, whether it's because I'm tall or not depending on where one's stoma is you see your underpants don't cover your pouch.

It comes right across the middle of the stoma so I've got, these pants that I've got on, underpants I've got on here a friend of mine brought them back from America because the ones in Britain they haven't got enough from the crotch to the top so that is just one of the silly little things perhaps that,

So what happens if your underpants are uncomfortable?

Well this is they are uncomfortable you see because they come in the wrong place er it's just one of those little niggles perhaps but,

And does it hurt?

Ideally what it needs is they want to be at least, I think they call it the rise actually from the crotch to the top and whether it's because I'm tall or not, I'm six foot three you see and so I even got the next door neighbour to try and take the elastic off, put a piece in the middle then put it back on again but it didn't work you see.
Previous Page
Next Page