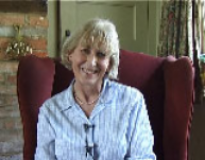 She has an intellectually disabled son and considers what might happen if he is ever screened for...

Show in context
SHOW TEXT VERSION
PRINT TRANSCRIPT
Nobody, nobody will get near him for an endoscopy I can tell you that, he just wouldn't understand. It's, it's tricky cutting his toe nails.

He's very good at the dentist, I think probably because you know I do his teeth morning and night anyway so I believe you can have an endoscopy under anaesthetic so I'll think about that one at a later date.

I mean I will watch his stools and there's certainly no problem there at the moment. I mean I will be aware of what to look for and I am, I mean I do keep an eye on him in that area.

Does he have to be accompanied to the loo?

Yes I do accompany him because his personal hygiene is not sort of terribly good and I do actually wipe his bottom for him but when he's at the centre they're always short staffed so he copes on his own quite well. He has an occasional accident if he's out and can't get to a toilet, and somebody doesn't understood him because his speech is very poor.

How old is he now?

He's 30 mm, he's physically very healthy but he's mentally quite disabled and so he does need quite a lot of help.

He can't read or write, I mean he can't recognise his name. He can recognise logos of his sports club but he needs a lot of personal help but he copes on his own quite well. So we'll cross that bridge when we come to it. I can't see any point in worrying in advance.

Show in context
SHOW TEXT VERSION
PRINT TRANSCRIPT
I remember the pain control was slightly spasmodic and you're not allowed to swallow anything at all so you have to have the pain in injections and they were so busy very often and only a Sister who's in charge of the drugs cupboard can actually do that and sometimes you did have to wait a long time, you didn't get them as regularly as you should have done.

In the daytime it didn't matter too much but sometimes at night you'd be waiting. Everybody else had had their pills, you had to wait for that injection and it would be sometimes a couple of hours late. And I remember thinking oh I wish she'd hurry up and come with my injection.
Previous Page
Next Page