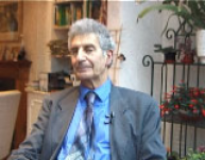 He found it impossible to question his doctor even though he is a doctor himself.

Show in context
SHOW TEXT VERSION
PRINT TRANSCRIPT
I was admitted to hospital and I remember expressing some concern er such that my surgeon, in whom I had really total trust said would I like another opinion. And I said I didn't want another opinion, er, because he knew other surgeons who would've been happy to see me.

In fact the reason I wanted, I was too, although a doctor and you might think this was quite unreasonable, I was actually too inhibited to explain why I wanted another opinion which was not that I thought anybody else would be technically superior, I happened to know he was technically extremely good, but that I wanted to make sure that people had actually agreed on looking at the specimen that it had been a cancer.

I couldn't bring myself to tell him that at the time and it was only when he was going to discharge me five years later that I said "You know X, I don't know if you remember you probably don't, but there was a point at which you thought I wanted another opinion and I almost did.

I just wanted to explain that it wasn't because I had any doubts in you as a surgeon, far from it. I was just doubtful about whether, because I know that 2 people looking down at a specimen can often disagree because that happens in my own work, I just thought I'd like to be sure that it really was a cancer."

He wished his surgeon had told him what he wanted to do rather than expecting him to choose.

Show in context
SHOW TEXT VERSION
PRINT TRANSCRIPT
He actually rang me about four or five days later to say that he was sorry to have to tell me but I did in fact have a cancer of the rectum and he would have to operate and in fact he offered me, I went to see him, and I think he offered me three courses, certainly two.

He could either do a very radical operation, remove virtually everything in the region or he could remove my rectum or he could, that is the terminal, the last part of my bowel, the last few, three or four inches maybe or he could just remove the ulcer.

And not being in any way expert in this I suggested I'd rather like to leave it to him.

He put me these alternatives and it seemed to me, to begin with he put them in this very even way and I, I found myself trying to mind-read what he really wanted to do and in the circumstances I said "Well what would you do if it was your brother?" in a desperate attempt to get him actually to commit himself.

And what, you know I was sophisticated enough I suppose to say "Well what are the 5 year survival rates for these things?" and so on. And eventually he committed himself and it was quite clear what he wanted to do and it was quite clear that was an alternative that would leave me, if it was successful which it was, with pretty well no disability and a very good chance of no recurrence.
Previous Page
Next Page