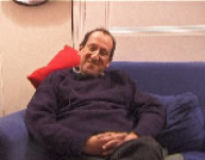 Age at interview: 49
Age at diagnosis: 47
Brief Outline: Diagnosed with colerectal cancer and secondary cancer of the liver 1999, chemotherapy given.
Background:

Describes his attitude toward living with a terminal illness.

Show in context
SHOW TEXT VERSION
PRINT TRANSCRIPT
Yeah, yeah, I've found it, I mean my consultant said to my wife and I when he first diagnosed us that some people find it a very, not rewarding so to speak, but a very enlightening experience.

And you know I've not enjoyed it, you know don't get me wrong, but it has been an experience that makes you think, makes you work out your values in life and makes you think about bigger things like death and living.

You know not just, I've always said that I'm not dying, I'm living and I'll carry on like that as far as I'm concerned. You know I exhibit these things saying I will happily die but my own view is that I am strongly living and that I can do a lot of things that many people of my age can't do in terms of fitness and stuff and work and I sort of live.

So you've got to ask whether you want to die when you're 85 and you're by yourself and your children are living in Yorkshire or something or whether it's preferable for me to die, you know, with my family and you know that's an option that I'm quite keen on in a sense.

And sort of growing old, losing my faculties may have been a problem for me. It may not have been but I don't know now, you just don't expect it (laughs).

He feels his GP did not make good use of his family history and medical records.

Show in context
SHOW TEXT VERSION
PRINT TRANSCRIPT
When I joined the practice about 14 years ago that I gave a family history.

Again, if I'm being critical it's all very well giving the GP the information but he's got to pluck it out somewhere. If I present with a symptom like blood in the faeces I think they ought to take that seriously.

I didn't take it seriously because I'm stupid and had a history of never going to GPs and being proud of it and etc.

And I went three times or four times and I was you know sort of almost, not dismissed as such, but it was never diagnosed as anything more severe than piles or muscle pain.

I really would take family histories and we've got computers nowadays so presumably if somebody presents with blood in the faeces then something should go 'Bong'. And I mean I'm not a computer person but you know I would imagine that they should be alive to something like that when I present with faeces in the blood sort of three or four times and er I feel there's a failure there.

Explains how deciding on which drug to use became more complex over time.

Show in context
SHOW TEXT VERSION
PRINT TRANSCRIPT
I had treatment with, standard treatment with 5-FU and a new drug called oxaliplatin which was successful at first in er bringing about a big regression of the tumour growth in the liver.

But as time wore on that became less effective and I moved on to another drug calledirinotecan which is 5-FU based and I was terribly sick on it and so I came off it very quickly.

Then I went back to oxaliplatin for a couple of months, three or four months, but it didn't have the same sort of results in regression, in fact there was a slight progression of the size of the metastases in the liver.

When that became apparent I went on to another drug called capecitabine and I was on that for six weeks until recently but the side effects were considerable, for me at least, in terms of the pain that I put up with. And also, my consultant at the beginning of the capecitabine treatment did an ultrascan and measuring it against nine weeks of treatment the tumours have grown so, because of the side effects and the, and the lack of any regression we decided to come off that.

And I'm now, as they say, in between drugs.

Describes the debilitating side effects of his chemotherapy.

Show in context
SHOW TEXT VERSION
PRINT TRANSCRIPT
If I tell you I have diarrhoea on occasions and I have vomiting on occasions but then I tell you I can have the two at the same time so you're sitting on the bog and you're taking a shit and you're being sick at the same time and you're tired because of all this sort of, these effects, and your feet hurt because they swell with the capecitabine and my hands got swollen and my back was hurting because of the referred pain from the liver.

They're all minor things, in some respects, I mean I wouldn't wish them on anybody, but vomiting and diarrhoea and stuff like that can be very debilitating.

And this winter has been very cruel to me I feel, I'm very cold, I shiver. I get towards 4 o'clock, 5 o'clock at the end of the day and my teeth are chattering and my, I'm shivering and all I really want to do is come home and get under the duvet.

So it's hard. One has in this latter stage of the past three or four months it's been much harder because of the side-effects and because of the progression of the disease.