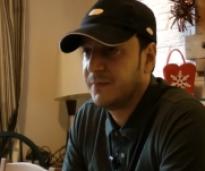 Paul is married and has two sons, Paul works in the financial services industry and enjoys physical fitness and socialising in his spare time. His eldest was born with a unilateral cleft lip and palate. His son’s cleft lip was first diagnosed by the sonographer at his wifes’ 20 week scan and when he was born the midwife discovered that he also had a cleft palate. The couple were immediately put in touch with the cleft team and a nurse talked to them about the care of their new baby with a unilateral cleft lip and palate. Paul and his wife were also fortunate to have a Paediatrician in the family who helped to explain the medical aspects of cleft lip and palate to them in more detail.

Knowing that they were going to have a son with a cleft lip at the 20 week scan (a 3D scan was also conducted) gave them plenty of time to adjust. The couple did their own research because they had read that sometimes the cleft can be associated with other genetically based problems. They also looked at the CLAPA website and saw lots of pictures of babies with cleft lips and information about care for babies born with cleft lip and/or palate.

Paul’s wife could not breastfeed her son when was born and had to feed him with special squeezy bottles – by squirting the milk down his throat. This was an aspect of care that Paul could be directly involved in. Paul’s son had his cleft lip repaired at 3 months. Paul and his wife were apprehensive about an operation that involves having a general anaesthetic but put their trust in the health professionals. Within a couple of days their son made a good recovery from the operation. The couple are happy with the cosmetic appearance of the cleft repair but are aware that other children may begin to notice as he gets older. Their son also had his palate repaired and the family have had contact with an orthodontist, speech and language therapist, and a child psychologist as part of the post-operative care. The couple have been happy with the co-ordination of the specialist cleft services that have been involved in the care of their son. He is now attending nursery school where he is happy and socialises well with the other children.

Paul recalls how he and his wife Michelle found out that their son had a cleft lip and what his future care would involve.

Paul recalls how he and his wife Michelle found out that their son had a cleft lip and what his future care would involve.

View topic summary
SHOW TEXT VERSION
PRINT TRANSCRIPT
So I just want to ask you about when you first learnt about your son’s cleft lip and palate now. How you felt about that at the time, can you remember? I think your wife said it was at the 20 week scan?

That’s right, yeah. So at the scan they actually spotted, the nurse, midwife spotted something on the… on the video and then she called someone else in, and then they had a look and then they told us. And then they… we had to go and sit in another room for a bit. And then we, I think we met a consultant afterwards who kind of briefed us on what it was. And then we went for further scans and a 3D scan and an MRI scan and all sorts of things. But… initially it was a bit of a shock because you don’t really expect anything. And then... but then after sort of thinking about it, and digesting it over the sort of course of a week or so I suppose it was just quite lucky that it’s nothing overly serious; it’s just cosmetic really. And there are some practical things, issues with it initially. But nothing, nothing sort of life threatening so yeah. So all in all, initially quite shocked, and then sort of got to grips, grips with it quite quickly hmm.

Paul and Michelle’s son made a quick recovery following his second operation which was to close his cleft palate.

Paul and Michelle’s son made a quick recovery following his second operation which was to close his cleft palate.

View topic summary
SHOW TEXT VERSION
PRINT TRANSCRIPT
But it literally was only the first few hours after his operation where he wasn’t happy which is, you know.

And then the next morning he seemed to be OK. It took a, it took a day or so actually, saying that, to get fully back to normal, as in get over the operation and stop, you know.

But I think that was a more, more difficult bit, was the bit after the operation, not the bit before. The bit before was just... you’re nervous and anxious and everything else. And the bit afterwards where you can kind of see your little boy, and he’s a bit uncomfortable and, you know, in a bit of pain and things. But then the second operation, when he was ... nine months, or six months, I don’t know, I think it was nine months, he... that was excellent. I mean I was getting really... again nervous and anxious about it all, and then he came out of it fine. And then he was sort of... he perked up straight away, it was not a problem. Which I was quite... because it’s supposed to be worse, the second one.

The second one is the one where they do the palate.
Previous Page
Next Page