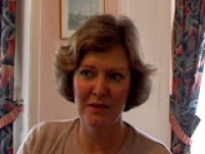 Describes her experience of the colposcopy and biopsy.

Describes her experience of the colposcopy and biopsy.

So with a colposcopy it's a bit like a smear but it takes longer. So you're there with your legs in the air sort of feeling very vulnerable, quite exposed and the doctor is sort of, rather than a smear it's over and done with in quite a relatively short period of time. The colposcopy they have to really make sure they can focus on the cervix so therefore you've got the speculum in which is quite uncomfortable and they may need to tweak it around a bit so you're sort of trying to relax as much as possible. And once they actually can see the cervix they paint something on it which shows up the abnormal areas, sort of like a vinegary type solution which does sting slightly. So, and you're just anticipating the next sort of thing, so it's quite nerve-wracking even though they try to reassure you.

And then when they take the colposcopy it is, it is like taking a little nick out of the skin and again you're anticipating that and you read about it, so you know it's coming. Perhaps it's best not to know I don't know and that point it is, as with anything if you get a slight pinch it is quite ooh, ow. And then afterwards you bleed a little a bit.  Fortunately I didn't bleed a great deal, but you sort of then, sort of feel right bleeding for a bit, a while afterwards so a bit of discomfort. But I think it's how undignified the whole thing is really and you can't get away from it. You know there's no, you know you're sort of, you're under a general anaesthetic, you don't care whether your legs are akimbo and everybody is staring but when you're actually there it's sort of a little bit more embarrassing really.

She has had several inadequate cervical screening test results over the years.

She has had several inadequate cervical screening test results over the years.

Slightly frustrated because I don't think anyone likes going and having a smear done, it's not the most dignified of things but obviously you'd go because, especially sort of in light of the history it's something you accept. But after the third attempt I was thinking oh no, its sort of, and every time they do it they sort of tend to be a little bit more thorough so use a brush and the spatula and it is uncomfortable. And afterwards you feel quite a bit of discomfort. So when, the second time that happened and I was thinking "oh here we go again", sort of several attempts.

She contacted Jo's Cervical Cancer Trust to get a second opinion about her...

She contacted Jo's Cervical Cancer Trust to get a second opinion about her...

On the internet, I just trawled through and sort of, I don't know, I don't know I got hold of them, I just literally trawled through and put in you know sort of key words and they came up with that. There was various sites but it was the one I specifically wanted that I could actually ask the question to. There was quite a few that you could just go to pages and get information but it was one that I wanted to be able to actually ask questions and it was great, you know an immediate response to say thank you we'll put it to our team of consultants and within a week I've had quite a detailed response which was personal to me which was really good, yes.

Describes her experience of diathermy loop excision as a day patient.

Describes her experience of diathermy loop excision as a day patient.

It was a very minor procedure, it wasn't particularly disruptive at all and it was a day case, a very light anaesthetic. So you automatically afterwards, almost automatically you know you feel fine you don't feel as though it's been particularly invasive at all because, again because it's a general anaesthetic, it's all done and you've no idea what happens to you. I had no problems afterwards, in fact I don't think I actually had any bleeding or anything afterwards so it was almost as if I'd had nothing done apart from the sort of taking a day out to have a mild general anaesthetic. I was home by the afternoon, I think I went to the theatre something like about 11 o clock in the morning, I was home by 4, felt fine.

Describes her experience of a cone biopsy to treat abnormal cervical cells.

Describes her experience of a cone biopsy to treat abnormal cervical cells.

You're actually an in-patient so, because you have a general anaesthetic so you obviously have to prepare yourself to go in to hospital to stay overnight or I don't know how many nights now but for a couple of nights. It was, I mean it was very nice, the wards were very nice, the staff were very nice. They, at that time explained to me it was going to be a cone biopsy which meant that they, literally a cone shape from the cervix was going to be cut away.

But the actual procedure itself is relatively straight forward, you have a general anaesthetic, so you don't know anything that's going on. And I was, it was fine, I mean sort of they come and make sure you're okay, you're fit and healthy, in the theatre, you have a pre-med and you're sort of put onto this lovely euphoria which is sort of, you know what's going on but it's great because it's sort of, it's almost as if you're having a lovely sleep but you're quite, you sort of know what's happening. And you're taken to theatre and the next thing you do you wake up.

The cone biopsy treatment was not as bad as she expected and after a couple of weeks she felt...

The cone biopsy treatment was not as bad as she expected and after a couple of weeks she felt...

Once the pack was removed there was a little of discomfort, I bled a little bit, not a lot and I was fine, I felt a bit fragile I must admit but I think that was probably from the anaesthetic more than anything. I think by nature of the fact that it is quite a personal thing you tend to feel a little bit vulnerable and a little bit emotional, that you know you sort of soon get over that, and when I went home my husband and the children were there and I had a couple of visitors.

And I remember the vicar came to visit me which was very sweet but it was quite an embarrassing subject you know "How are you?" "I'm fine," please don't, I don't want to go there really with you, don't mention it, it's not the sort of thing you mention to your vicar. But, but it was okay, I mean it was, after a couple of days I was back to normal. I mean it was almost like then saying you know you shouldn't be hoovering, you shouldn't be doing things like that, not initially because obviously there's potential for bleeding so it was quite nice you take it easy really and let other people do things.

It's almost like having a baby to a certain extent afterwards. But after a couple of weeks I was back to normal. So it, to reassure people it wasn't as bad as what it sounds and when you say they're going to take this sort of cone away from your cervix you have all sorts of images of quite a lot, being quite mutilated but obviously you're not really.

Since her cone biopsy, she has had difficulty getting enough cervical cells taken during her...

Since her cone biopsy, she has had difficulty getting enough cervical cells taken during her...

And I'm trying to think, I think that was fine and that's how it's been since until 2 years ago, went for a routine smear and then they had difficulty getting the cells. After 3 attempts with a period of sort of probably 2, over a period of about 6 months on the third attempt managed to get some actual cells from the cervix which showed they were fine so that was okay. Again last year went back for a routine smear but had the same difficulty they just couldn't get the cells. Then was sent to see a consultant who suggested that it was probably due to the cone biopsy I'd had several years ago, that it meant that the cervix was just not giving up the cells as it should do.

Although it didnt interfere with her life, she is always aware of when her next cervical screening test is due.

Although it didnt interfere with her life, she is always aware of when her next cervical screening test is due.

When the smears were fine, obviously you just, it's an inconvenience, no it's not even an inconvenience but you are aware that you, every March I have to have a smear. And I'm sort of, I would be making the appointment rather than wait for the appointment to come to me. So I suppose in as much that I'm aware of it. But it doesn't interfere with my life.

The abnormal smears that I've had had disappointment, especially with the second one thinking that it had been sorted and there wasn't any more problems and it had been quite a long period of time, it was the disappointments of here we go again. Not because it's, it's just an inconvenience really and it does weigh on your mind, I mean obviously it is because you sort of think oh they could be pre-cancerous and as you get older you sort of, you get more responsibilities and you think how it would affect people around you, if only if you've got to go and have an operation.

And I suppose it's something that's there, you don't, I wouldn't say you live with it, it's not as if it's a huge thing you have to live with, there's far more inconveniences in life really, but it is something that always you're aware of. And as I said I suppose I was aware of it, the fact that every year I knew I was due for a smear and I made sure I'd got my appointment.