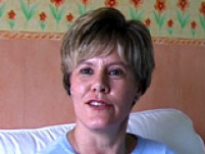 Receiving an abnormal result by letter frightened her.

Receiving an abnormal result by letter frightened her.

Yeah, I spoke to the doctor and she, they did say it was just like borderline but it was just that initial, getting that letter, but they had tried, they said they had tried to phoneme but they couldn't get me so they sent me the letter, that's what frightened mebecause it's just a, a basic letter.

So how would you have liked to have been told?

I think I'd have rather been asked to come in and see the doctor rather than just get that letter. I don't think it's nice the way it's done, because it does frighten you.

And what did the letter say?

It just said that your smear test was, there were abnormalities found and that they, I was being referred to colposcopy and then they just put the leaflet in with like all the details and it just made it look like I'd got cancer. It frightened me.

She was terrified when she received a borderline cervical screening test result because she thought she had...

She was terrified when she received a borderline cervical screening test result because she thought she had...

I went for my normal smear test, not really thinking there was anything wrong until Igot letter through the door saying I'd got, they'd found some abnormalities and theywere referring to colposcopy. So I just like thought that I'd got cancer and I wasgoing to die because I'd just had this letter, this basic letter through the post. So I had a couple of days off work because I was like terrified.

Can you tell me more about that, those feelings?

It was awful it went on for quite a while I just thought you know I'd got cancer and that was it, because it didn't say anything in the letter, it just said that I'd got abnormalities and they were referring me to colposcopy. So I wasn't until I actually went for the colposcopy appointment that I felt better. And they assured me on the screen that I was just borderline and I hadn't got cancer.