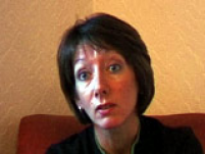 Cervical screening is an important part of looking after yourself.

Cervical screening is an important part of looking after yourself.

I think it's essential that women look after themselves and we must do whatever we can. We, most of us wouldn't think twice about going to the dentist twice a year to look after our teeth and is that because it's a visible thing? We have our eyes tested because we need to see to get by and to drive a car but I think you know those hidden things need just as much care and certainly they are more life threatening if they go wrong. I just think it's our duty to look after ourselves, you only get one chance.

Describes her experience of her colposcopy examination and biopsy.

Describes her experience of her colposcopy examination and biopsy.

It was not an unpleasant experience. The clinic was situated in the maternity unit. It was very calm, it was very well organised. I imagined I'd be kept hanging about for a long time because one generally is on this sort of visit. But once I'd registered my presence I was told there'd be a 15 minute wait or so, I was probably early. And I had a cup of tea and was called in due course.

I was then taken into a separate waiting room from the main waiting room for that particular clinic. I was the only patient there along with a secretary and other administration staff I suppose. A bright, cheery pleasant room, lots to read on the walls and was then introduced to the nurse, before the doctor, who took me through what was going to happen and asked me if I had any worries, about the procedure rather than the condition, or potential condition. And then went in for the treatment after a short while. It was very organised, very easy, friendly, they were very caring.

The doctor was superb as was the nurse, just the two of them in the room. They offered to let me see the cervix on the video screen. I declined that, I felt that was more than I needed to see at that stage. I did say I might look afterwards but didn't need to see the procedure taking place. I was told that it wouldn't be painful, just uncomfortable perhaps. When the biopsy was taken I believe there was some dye used at one stage and when the biopsy was taken it would be like a little pressure or prick but in fact I didn't feel a thing.

It was all very civilised for an undignified condition. And the good thing was I was assured by the doctor at that stage that she didn't feel there was a problem there at all. She said it looked all very healthy and it really wasn't, she said she would be very, very, very surprised had there proved to be a problem in the long term. So I came out of there feeling very positive and, well pleased with the result I suppose.

Describes how she felt about her diagnosis at the hospital following further investigations of...

Describes how she felt about her diagnosis at the hospital following further investigations of...

No I was, I came out feeling quite relieved and phoned my husband even before I left the hospital building. In fact I think he phoned me and gave him the news that it was probably absolutely fine. And he was pleased, and said "You see, I told you it would all be fine, are you alright?" And I said "Well I'll still be happier once I've got the result." And he said "Well I think you'll find it's going to be okay. No emotionally I was pretty much okay then, I came out and I drove to the nearest large shopping precinct and did some shopping as you do. I was told at the time I would probably have a two to three week wait I believe for the result. I think that was the time scale. But in fact I had the results within about eight to ten days, it was very fast and it was very clear in saying you know there really wasn't a problem and that I should have another smear with my GP after a year.

She felt she was just unlucky to develop abnormal cervical cells.

She felt she was just unlucky to develop abnormal cervical cells.

No I am, well I suppose I have been aware that possibly smoking could be a contributing factor. Purely because when one goes for the test it's always one of the questions "Do you smoke?" "No," a bit smug. But no I haven't really, I just thought it was bad luck really if these things happen. You know assuming one is reasonably fit and healthy, tries to eat properly and doesn't smoke, I thought it would just be bad luck.