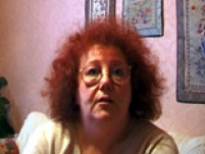 She found the hospital leaflets informative and reassuring.

She found the hospital leaflets informative and reassuring.

Hospital leaflets yes, yes they were all hospital leaflets. There was a whole bunch of them primarily for female complaints if you like. There were lots and lots of them and simple to read, not sort of heavy, heavy duty sort of wading through loads of stuff they were sort of sparky and caught the attention and just picked out specifics of what you might be interested in, they didn't labour on things that can go wrong and what can't, they just literally were all up beat and I found that quite, well very comforting actually.

Her main fear was having a general anaesthetic for the first time.

Her main fear was having a general anaesthetic for the first time.

I've never been in hospital before so I was absolutely terrified of it, I'll be perfectly frank with you, I was scared to death.

Why were you scared?

Scared of having a general anaesthetic. I'd hoped to be able to have this minor operation still conscious but of course it's apparently not possible I don't know why but it's not. That was my only fear, I had no fear of anything else just the anaesthetic. However it all went swimmingly, no problem at all. The cells were removed and the biopsy was non-malignant and I carried on having regular smear tests.

She now feels more able to speak openly about gynaecological problems with friends.

She now feels more able to speak openly about gynaecological problems with friends.

It's made me less, less afraid of hospital procedures to a great degree and also more likely to be able to discuss with women friends. You know I'm of a certain age and a lot of my friends are also and they're now beginning to experience the same symptoms that I did and I feel as though I'm relaxed enough to be able to say "This is what happened to me and sort of don't, don't not go to hospital, don't not go to your GP if there is even the slightest abnormality in your cycle, of any description, just go and see what it is." I feel more confident saying that because I've never, I mean I don't hide it away anyway but I feel more inclined to be able to speak to people about it, to broach the subject myself if they're kind of skirting round it you know "I've got stomach ache," or whatever, I'm more inclined to be able to say "Well is it do with your cycle, whatever?" And lead it on from there.

The way she was treated in hospital reduced her fears about her abnormal cervical cells.

The way she was treated in hospital reduced her fears about her abnormal cervical cells.

I don't know, I think probably because of the, the way I was treated when I went into hospital. There was a kind of, there was an aura of "Whatever this is we're going to sort it for you." Not "We can make you well," but "We're going to be able to do all that we can for you," and I had no fear. I mean I had obviously an anxiety but I thought I was in capable hands.