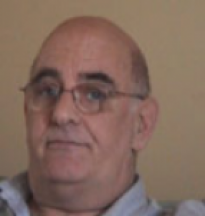 Brief Outline: Deterioration was gradual over 14 years. Day care was gradually increased. Hospitalised when he became ill and then went into residential care where he was happy. Difficult for his wife as they had been married 74 years. She is now also in residential care.
Background: Son caring for his parents who lived close by when his elderly father developed Alzheimers. Carer is married.

Describes how he at least was not aware that his father had ever actually been diagnosed with Alzheimer's disease.

Describes how he at least was not aware that his father had ever actually been diagnosed with Alzheimer's disease.

I don't know that he was ever diagnosed in the sense that how, well let me put it this way, the local Mental Health Centre is or was at [hospital] and I was aware he went there for one of his relief days. And he then started going to [village hospital] and I can't remember what it was but there was something to do with [village hospital] that happened and I sort of said 'I don't know what the hell's going on, because I didn't, I had no idea what was happening.' And I got a bit agitated about this.

And that's when I got a, I first got to meet [name] and she phoned me and said 'Look I run the Friday thing at, [village hospital] and I understand there's been some sort of communication failure, can I come and talk to you?' And I said 'Well that's very nice of you, yes do.' And she came and talked to me about what they did and how they, how dad had been referred to them by one process or another and she talked to me a bit about, about the disease and how she saw it in a way that I've found helpful ever since.

But I can't actually say that I understood that he'd ever been diagnosed in that sense. I think, I'm not sure that there is a diagnosis. I think actually he'd come to a gradual recognition that this is probably what's happening. I'm not sure that I mean you know if you asked me to define how, the point at which you know it's not just age deterioration so it's not just an age related dementia and it is Alzheimer's I have no idea.

Problems persuading his wife to take the medication which she needed for her chronic obstructive airways disease.

Problems persuading his wife to take the medication which she needed for her chronic obstructive airways disease.

I'll give you an example. My father came from a family of five and one of his sister's had died at a fairly ripe old age and we were sitting actually where I'm sitting now one Sunday afternoon talking and I mentioned in passing the death of his sister and he got very agitated about this because no one had told him.

Now I knew he'd been told because I had told him, but I had learnt partly as a result of the processes that he'd been through, the thing you don't do is confront. You don't say to somebody 'Of course you know, I told you.' The rational mind in the patient is saying to him 'I would not have forgotten if I had been told my sister had died.'

And you can very easily put yourself into a conflict situation in which you are to him - or her - appearing to be completely irrational, aggressive and unreasonable for no cause because you are telling him that something's happened that he knows very well hasn't happened because it's not the sort of thing he would forget.

Considers whether there is ethically any alternative to the massive expense of care for his parents.

Considers whether there is ethically any alternative to the massive expense of care for his parents.

The hardest one was, was with mother, the conflict is, is always that, the conflict is always between what you should do and what it's going to cost and what you can afford and what the, what the effect of it is on you and on your life. And I haven't, I haven't been forced into that corner. Yeah there are a lot of things we might have done if we hadn't spent money on my parents and mother's been in, in care three years, it's cost £90,000. I guess I've had to find about half of that out of, out of income which is not a small amount.

I, they're, they're both 95 now and I mean I don't see this as, I don't see this as an unending commitment but sometimes you, you find yourself with the, sitting thinking that you know there are things I want to do and this is stopping me. And at the moment you make the commitment that's the most difficult time because that is a time when you're making a, a decision which you may come to regard as, a test if you like of your own morality' which is more important, me or somebody else. Or how important are they to me? How much does it matter, how much do I care if? And you, as you go through that process you can sit in judgement on yourself a bit and it's not always very comfortable.

So that's difficult. Am I going to spend £800 a month or £1,000 a month on my mother's care or shall I find somewhere cheap you know, cheaper and I don't have to spend as much and she won't like it as much but what the hell she's had most of her life. You're asking 'am I doing that, am I doing that?' is the sort of question that you ask yourself. Well I didn't have to do that very much. And I had some fortunate breaks in that and I was also fortunate in having the ability to make that funding choice.

You know I mean if it had absolutely crippled us would I have made it? I don't want to go there and ask the question. I mean if it's, you know it's been difficult but not unduly difficult. If it had been screamingly painful in terms of our life style, would I have done it?  I don't even want to ask myself the question. So that's one thing.

Separating them very difficult but it wasn't really a, you know what's the alternative, and when you look at something and say 'What's the alternative?' and there isn't one, that's easy isn't it, that's not a difficult, that's not a difficult decision. You've made you know, you've recognised the reality of the situation is there isn't another choice. Your heart may bleed a bit for one or the other of them, but that's just practicality.