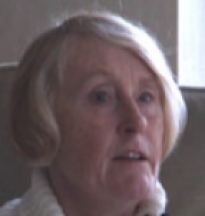 Age at interview: 60
Age at diagnosis: 72
Brief Outline: Cared for by his wife at home. Was terrified when left in respite care so wife removed him within hours. Developed Parkinsons disease. Was admitted to hospital for assessment and subsequently transferred to residential care.
Background: Carer of considerably older husband (+18 years). They have no children.

Her husband was having difficulty reading and later with finding words.

Her husband was having difficulty reading and later with finding words.

In the early nineties I became aware that my husband was getting a little bit less quick on making decisions or remembering things. He was older than I, so he was then in his seventies, well early seventies, and I just thought oh he's getting on a bit you know. But it was clearly more than that, after a little while I realised.

And he was also becoming increasingly concerned about his eyesight, having lost the sight of one eye during the war, and the other not very good. Looking back I now realise this was because he was beginning not to recognise letters and it was the beginning of him not being able to read signs or the newspaper quickly and things like that. At the time I just thought he was possibly having more problems with his eyes, but this turned out to be, it turned out to be the case but wasn't related to what I now feel was really wrong with him.

His speech also became very, less clear. He'd always been a very clear and decisive speaker using the right words and, and syntax and everything. So there was, he used to stumble for a word - a perfectly normal word, nothing peculiar - and not being able to grasp what had been said to him very quickly. And after about a year I thought maybe he'd had a slight stroke.

So I took him to our GP who sent him to a, I think he's called a geriatrician, who gave him all sorts of tests and came to the fact there was nothing wrong other than the possibility of the beginnings of, dementia. He suggested taking an aspirin every day to stop any deterioration, or help with any deterioration, which he did. And this went on for some years with him getting steadily worse and in the end very much worse.

The loss of faculties is gradual.

The loss of faculties is gradual.

But everything else slowly vanished. A difficult time but it happened so, it doesn't happen all at once. Its like a light bulb going actually, you get a flicker and you think oh there goes that, and it might go on for some months, the fact that he could sometimes do something and sometimes not, but you know in the end its gonna go and then one day its gone. One day you can dress yourself, another day not. One day you know which, you know that your socks go on your feet, the other time they could go anywhere.

Getting into a car became a, an increasing problem because it, if I could open the door and he could actually sit down into the car it was alright, as long as I could get him to face the right way. But you could be up to half an hour getting someone, getting him in the car because he couldn't remember which leg to put in first. And even if I held it and he looked down the sort of mechanism for telling his brain to move that leg didn't work. So there are a lot of daily details which, are quite hard for carers because you've got to allow time for absolutely everything and you haven't got time for anything else, as it progresses.

Dates the onset of serious deterioration to the anxiety caused by going abroad on holiday.

Dates the onset of serious deterioration to the anxiety caused by going abroad on holiday.

View topic summary
SHOW TEXT VERSION
PRINT TRANSCRIPT
We did go on holiday which was an absolute disaster. We'd, as I said we have an interest in classical music, particularly Haydn, and we went to Austria to Eisenstadt for the festival about four years ago I suppose. And he'd really been looking forward to going as much as he could look forward to anything, he was really looking forward to it. But when we got to Heathrow he was desperately confused by the airport. And when we got on the plane I could see that he'd actually dropped several levels and didn't know where he was going.

Anyway we went and we went to the concerts and they were too loud and there were too many people and he was absolutely terrified. We were stuck there for a week but we managed to sort of walk out into the, countryside and just have quiet times, and he was OK. And I changed, our tickets and came back to Gatwick as soon as I could, rather than have another go at Heathrow.

And that I think knocked him back far more than any of us had ever considered, and from then on he did go downhill very, very quickly.

Had trouble getting information and found that professionals, who were presumably familiar with the system, did not explain enough.

Had trouble getting information and found that professionals, who were presumably familiar with the system, did not explain enough.

I think it's the lack of information. I mean real information, not just hearsay, that's quite hard at times. I mean I suppose if you've got as far as having a professional carer or care help, then you must at some stage have, have been through whatever systems there are for helping, so they probably know about it anyway. But I didn't know what there was. I didn't know what the disease entailed. I didn't know if, I did know there was no cure. I did know at that time there was no treatment. I didn't know there was any care, you know respite care available until it was far too late, even if it had been suitable it, it perhaps might have been earlier, I don't know, before the real fear and terror set in.

I think really they should just not assume that everybody knows what they're on about because they're all in their particular sphere, because they all seem to know each other. And they rattle off these names of people as though we've all heard of them, and we never have, you know, I think sometimes, not all, and this is, this is, this is a generalization and probably not true of many of them but some of the ones that I've met assume that you know there are various services for this and various services for that. I didn't know I could get a, a thing to go over the loo, so that my husband could sit properly without falling off. I didn't know I could have little handles on the door.

I didn't know I could have got a wheelchair. I didn't even, I didn't even know there was a community psychiatrist. I don't know why I didn't know that. I suppose it never occurred to me to ask. But certainly nobody told me. I don't know whose job it would have been to tell me, I don't sort of suddenly think, 'Oh they should have told me', I don't, I don't believe this mysterious they, one has to take responsibility but it would have been nice to know from somewhere that this, there was somebody I could have spoken to, perhaps a little earlier than, you know two days before he says 'OK, he's got to go in'. But maybe that's what they do, I don't know.

Those I did meet were perfectly nice and helpful when I finally got to meet them. So I would say make yourselves known. Or make public your availability, bearing in mind that carers don't go out very often, they're stuck. Maybe, but I don't know how they could do that.

Found an Alzheimer's Society booklet on caring for someone with dementia very useful.

Found an Alzheimer's Society booklet on caring for someone with dementia very useful.

View topic summary
SHOW TEXT VERSION
PRINT TRANSCRIPT
I went to the library and just looked it up. Later I joined the Alzheimer's Society and they had some very, very useful leaflets and the only really useful book I have every had came from them, and I can't remember what it's called, but, it's the standard one that they issue. I think its called 'Caring for Someone with Alzheimer's' or something like that. Something you know fairly basic for the subject.

And that was useful. And that it listed most of the symptoms that people had and explained that they didn't have them necessarily in that order, and they didn't all get them all. And that the stages of the disease, how it developed, that it went into perhaps three, well four including the really terminal stage. I think those who are lucky die of something else first. But I didn't know anything about it.

Being a carer affected her perception of relationships with others.

Being a carer affected her perception of relationships with others.

Have your relationships with family and friends changed over this period?

Not with my family I don't think, although they don't live near, they live down in [place]. They, were very good, they came up when they could. And in fact [my husband] always recognised them. He had no family of his own. And he was, always pleased to see them, and he, even if he didn't know who they were, he knew them.

My relationships with friends yes, has changed. Some have become much closer but others, I've all, I've lost touch completely over the five or six years and although they say 'Oh its nice to see you back,' if I go somewhere, I think well, you know, you didn't even bother to pick up the phone to see. You knew [my husband] was ill. You knew I couldn't get out and you didn't even bother to really just, even acknowledge my presence sometimes. And some of them simply, if they saw us in the town, and if [my husband] was behaving less than 'normal', would simply avoid us.

And I mean I do, understand completely that. And I do, and I don't hold it, I suppose I don't hold it against them, but I have the greatest difficulty in forgetting it. And also other things I find that I am slightly bored by the trivia of things. You know, who won which darts match or cricket match, or who won this, or what the neighbours said, not that it was ever of any great interest I must admit!

But I am simply, I've become more detached from people I think. Partly as a result of being isolated for a long time and partly because of the circumstances of how it came about. So I think yes it has changed.