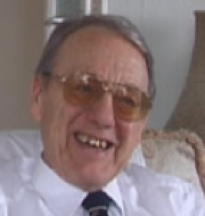 Age at interview: 80
Age at diagnosis: 68
Brief Outline: Her mental and physical condition has deteriorated steadily since she herself first recognized she had a problem in 1991. She can now no longer talk or walk. Cared for at home and day-care centre.
Background: Husband caring for his wife of 58 years at home. Well supported by four sons, social services and old friends. Diagnosed in 1991. Occupation of carer: retired, wife was a PA/Housewife.

His wife recognised her problem early having had experience with family members who had Alzheimer's disease.

His wife recognised her problem early having had experience with family members who had Alzheimer's disease.

In the case of my wife and myself we were I suppose, should I say, fortunate in that two of her aunts developed dementia in their 70s so it was not a new experience for us although we never thought that we would be personally involved. But we first noticed it when my wife was driving.

We used to drive down to Spain for the winter and my wife was a very, very good, very confident driver so the way we did it was one of us would drive for 2 hours while the other one would have a snooze in the back seat and that way we used to do the 750 miles down to Malaga very often in a day. And on one occasion fortunately I wasn't snoozing in the back I was sitting in the passenger seat when we came to a large traffic island and my wife suddenly said "Which way do I go round?" and we realised then there was something strange happening and after the next stop and changeover my wife said "I don't feel I can drive any more." That would be in 1991.

Then we didn't think too much about it at the time except that occasionally she said she had wavy lines in front of her eyes which was a type of migraine and it passed if she lay down for a little while but it was evidently something more serious.

And then in I think it would be about October 91, we flew out to Kuala Lumpur to see our son who was working out there and while we were staying there my wife began to lose her way between the block of apartments where we were staying and the restaurant over the road where we used to go to breakfast every morning. We would set off and she wasn't sure which way to turn. So when we got home we talked about this and said you know well this is what happened to Auntie Madge and Auntie Renee we'd better do something about it. And my wife said "Yes what do we do?"

His wife developed bedsores while in respite care and he hasn't dared to leave her again.

His wife developed bedsores while in respite care and he hasn't dared to leave her again.

View topic summary
SHOW TEXT VERSION
PRINT TRANSCRIPT
I had one unfortunate experience with a nursing home where I think largely because [patients name] is unable to complain and never causes any physical trouble I think she tended to be neglected. I was away for a month's holiday, I went to see my new grandson when he was born, that was in Jakarta so I went out there for a fortnight and then I went on from there to New York to see my other son and the granddaughter's graduation.

So I was away for a month and when I came back [patients name] had got bedsores as a result of them not taking proper care in the nursing home. So I had her at home for 3 months with the district nurses coming in every morning until we got this cleared up and then I said I wasn't going to take [patients name] back to that nursing home which incidentally has since closed and I found another nursing home just along the road where I knew the matron.

Social Services were very co-operative and they arranged a contract with the Nursing Home to look after [patients name] as a special case during the day which gives me from 11 o clock till 5 o clock, Monday to Friday to be a free agent. They look after [patients name] for me there and I find they're very good. But whether they would look after her if I went away for a long time or not I don't know so I haven't risked it (laughs). Once bitten twice shy. So they look after her very well during the day and that's as much as I need so I haven't asked for any more.
Previous Page
Next Page