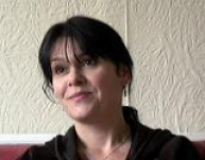 Age at interview: 40
Brief Outline: Lacked knowledge and confidence with first baby, relieved to introduce bottles. Breastfed second with ease and pleasure, would like him to take a bottle but he refuses.
Background: At the time of interview, this 40 year old, White British woman was breastfeeding her 7 month old son. She also had a 3 year old daughter whom she had breastfed. She was a full-time mum and her partner was a university lecturer.

When this woman had her first child she was older than the other women in the maternity ward by about 15 years and the only one breastfeeding. Less than three years later, things had changed dramatically and many of the young women wanted to breastfeed their babies. Even though the staff members were in favour of breastfeeding, she feels that they were not very supportive nor helpful, coming grudgingly to give help when requested. She says that it felt a bit 'cattle marketish' and thinks that a health professional dedicated to breastfeeding would have been more appropriate. She had no experience of breastfeeding at all before her daughter was born, describing herself as 'clueless', was never comfortable and doesn't think that she really mastered it the first time around. It was a relief to change her daughter to bottle feeding. Second time around, with her son, was a different story. He took to the breast, she was much more confident and breastfeeding has gone smoothly, apart from a mild blocked duct episode. She has tried to introduce him to a bottle, to give herself a bit of respite, but he is not ready to give up the breast. She thinks that, in the midst of a busy household, this is his special time for cuddles. He is having solid foods and breastmilk during the day and breastfeeds frequently at night. This is not a problem for her as he sleeps in the family bed and she barely wakes to feed him saying that 'it is much easier than warming up a bottle'. To pregnant women she says 'Give it a go ' because you both get a lot out of it ' and don't be embarrassed'.

She woke to find her first baby in bed with her and tried to latch her on by herself. Thereafter...

She woke to find her first baby in bed with her and tried to latch her on by herself. Thereafter...

View topic summary
SHOW TEXT VERSION
EMBED CODE
PRINT TRANSCRIPT
They didn't try her straight after the birth because, I had an emergency section and, I had the shakes for probably about an hour afterwards, I think due to the anaesthetic. They didn't try then, no I just, remember, vaguely remember, coming round in the hospital bed, with her next to me and she was crying and giving it a go basically'

'somebody there to help you latch on'

'that first time, you just'

'picked her up and'

Yeah I just picked her up and tried and presumed I was doing the right thing.

She fed, yes, yes, she was, it was sore, it was most uncomfortable and I wasn't sure I was doing it right, I did ask, I did ask the midwives and they were helpful, I think it was embarrassment as well, a lot on my part, for baring your boobs and having a baby there kind of thing and having somebody else messing around with you, it was so, no I don't, I wasn't, I wasn't very comfortable with it, and I think that's probably why I didn't stick with it very long, and I wasn't confident how much milk she was having and I think those are the age-old arguments for giving them a bottle and you knew how much they were drinking and, stuff like that and I didn't know enough, really.

The midwives, when they came round and visited like I said they did help, they did, I think one of them did try like latching [daughter] on and stuff like that, I think it was mainly lack of confidence on my part I really do. Whereas the second time the midwives were more hands-on, I was less, bothered, you don't, I don't think you care as much the second [laughs] time round it's like yes, fine and I was fine after I had him so he fed immediately, you know, probably like half an hour after he was born and that was it he just kicked in straightaway.

How was that, can you explain that sort of feeling, is it?

It was brilliant, it was really, yes, I really, I felt confident, he was obviously feeding, he was obviously satisfied, I didn't ever think [daughter] was satisfied, she was grizzly, I don't think she took to it and I think my nerves showed and that's probably why she didn't take to it and we never had a comfortable relationship while I was feeding her, whereas [son] from day, like I said from within half an hour of being born, in the recovery room he had a feed and it just kicked in from there so I never had a day's problem with it. I think he knew what to do as well, I thought he was quite competent, he knew what to do, he knew where to go and straightaway, you know, just put him.

It was a relief to wean her daughter onto infant formula but she had to deal with her own...

It was a relief to wean her daughter onto infant formula but she had to deal with her own...

View topic summary
SHOW TEXT VERSION
EMBED CODE
PRINT TRANSCRIPT
So what was the last straw? What made you give up in the end then?

Possibly selfishness after all those years having a baby and then finding out that I really would like to nip to the loo when I wanted to go to the loo and I would like to sit down and eat a meal and, probably, I would like to hand her over to somebody else for five minutes, it would be nice.

Whose decision was it made, was it to stop?

How did you do it? You had a fully breastfeeding baby at this stage?

I think we brought in, we were told to bring in a bottle, the advice bring in a bottle of the evening and then, try and bring, them slowly in but I think within about three days she was on bottles, she took very quickly to bottles unlike my son she did take to the bottles okay.

What about your milk supply and your comfort?

So it was relief?

I was relieved when she went on bottles yes. And partially because I knew how much she was drinking and I think she was more settled.

Yeah I think it was.

'getting in her feed?

I did want to know how much she was getting, yes, and I couldn't tell that and as I said, because I was constantly engorged I don't think, I had the feeling that she wasn't emptying the breast, she wasn't feeding properly, and she didn't seem settled, saying that in retrospect a lot of the wandering around with her trying to get her to sleep and stuff like that continued way months after she went on bottles so I think a lot of it was just her nature but.

So you think the bottles didn't settle her any more?

I don't, no I don't think they settled her, any more, no I think I just felt more comfortable with maybe that bit more freedom.

What about her weight did it make any difference to that?

No I don't, her weight seems, I think her weight was very similar to my son's, there doesn't seem to, maybe a bit heavier, not really, no major difference, no.

So she just continued to gain in the same'

'way as she had on the breast?

Absolutely fine yes. So it was, it was probably more for, more for me than her looking back, just felt a bit claustrophobic so.

She describes the difference between the pain of engorgement and the pain of sore nipples. She...

She describes the difference between the pain of engorgement and the pain of sore nipples. She...

View topic summary
SHOW TEXT VERSION
EMBED CODE
PRINT TRANSCRIPT
Yeah I was still lying down with her. And I don't think, I don't think I've had a, I don't think I had mastered the art because my bust was constantly hard, it was, I got really engorged as well, obviously when the milk comes in, it's quite scary [laughs] what happens, but I didn't, I'd, I had to use cabbage leaves and all sorts, I did seem to get really, really sore, hard'

'breasts a lot of the time, so I don't know that she was feeding enough and emptying the breast, I just seemed to be filled with milk a lot.

So that soreness of engorgement'

'was different from the soreness of the sore nipples?

It's going back so, it just seems like years and years and years ago. Yeah her actual feeding was like a cut sore, more than anything like you, you know, like you'd hurt yourself, you grazed yourself, yes it was definitely an eye-watering, one of those, a bit like an electric shock I was told it felt like sometimes when that, and it was very much like that it was sore, whereas the actual sore bust it was the whole side of your body, you just felt uncomfortable and, achy and you know it was horrible.

So you used cabbage leaves?

How did you use them, what did you do?

'the midwives told me [laughs].

Well the midwife, one of the midwives who I thought was a bit loopy actually, told me and I thought, 'Oh God here we go again, she's come up with something else' put them down my bra overnight and they'd, it's, it was like having a warm flannel, that idea as well, the milk starts leaking out and they kind of like take them down, take the pressure off, they were great, didn't smell very nice but it was [laughs] it did work, definitely.

It was like a leaf, a leaf each side, per evening if I was doing it and then change them.

I suppose they lose, kind of only last so long I don't know.

And how long did you do this'

Probably only used it about four or five times, but it was when me bust was really, really sore and, like trying to get a baby to latch on to a really engorged breast is very hard [laughs] and.

Did you have any other tricks up your sleeves for getting a baby to latch onto an engorged breast?

Just warm flannels, I was told to or stand in the shower and let the warm water.

Or in the bath.

That made the milk flow?

That yes, yeah or lie in the bath, sometimes as
Previous Page
Next Page