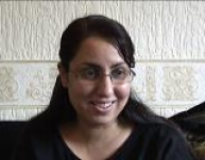 Age at interview: 30
Brief Outline: Caesarean section, extended family support, thrush, early bottles of expressed breast milk and infant formula led to weaning at ten weeks. Discusses breastfeeding caf' and special foods.
Background: At the time of interview, this 30 year old, Pakistani woman had a 6 month old son whom she had breastfed for 10 weeks. A customer services worker, she was married to an IT engineer.

This woman was born in Pakistan and was herself breastfed for three years. She came to the UK when she was two years old. She fits in the middle of two brothers and four sisters, all of whom were breastfed. She does not remember seeing anyone breastfeed and was not able to attend antenatal classes, so had little idea of what breastfeeding was about, thinking that 'you put the baby there and the baby feeds and that's it'. After the birth of her baby by caesarean section, she went to live with her husband's family for six weeks. Her mother-in-law was a great help with the baby, sleeping in the same room and getting up to the baby in the night. She talks of having a large extended family around her with plenty of willing arms to hold the baby. She describes the special foods that her mother and mother-in-law made to help bring up her strength and to help her to breastfeed her baby. When she returned to her own home she was keen to get the baby into a routine and eventually sleeping in his own cot. She talks about having what was diagnosed as thrush in the breast and describes the pain as being 'like he had glass in his mouth and he was biting me'. She sought help from a local Sure Start breastfeeding caf' and internet breastfeeding chat room. The pain never really went away, in spite of trying antibiotics, various creams and gels and breast shells. Eventually, she couldn't take it any longer and, after much soul searching and feeling guilty, she introduced a bottle of infant formula to the baby to give herself a bit of a break. She regrets giving him a bottle and feels that if she hadn't done that she would have still been breastfeeding.

She didn't know much about breastfeeding at all, although her mother had breastfed all of her...

She didn't know much about breastfeeding at all, although her mother had breastfed all of her...

View topic summary
SHOW TEXT VERSION
EMBED CODE
PRINT TRANSCRIPT
While I was pregnant I didn't really know much about breastfeeding at all, nothing really. I don't really know very many people who've breastfed except for my mum.

So your mother breastfed?

Yeah she, I was breastfed for three years.

Really? How many children, how many siblings do you have?

I have two brothers and four sisters.

And were they all breastfed?

All except for the last one and that was because my mum got diabetes.

And all for a very long period like you?

Was that here in this country?

And so it was that, do you think the norm in Pakistan was to breastfeed for three years or perhaps longer?

Why do you say that?

I don't really know very many people who've breastfed, and that's referring to people in Pakistan as well.

So do you think that fewer and fewer people are breastfeeding in Pakistan?

Or was your mother unusual in her time?

No, no she wasn't unusual.

So that was the normal thing to do?

It was the normal thing at that time. I couldn't say what it is now. Yeah it was definitely the norm at that time.

The pain of sore nipples was replaced by a sharper pain that was diagnosed as thrush*2. Breast...

The pain of sore nipples was replaced by a sharper pain that was diagnosed as thrush*2. Breast...

But it wasn't that simple really. Then when I left hospital I [pause] he started losing weight and I think it was partly because I was tired and it was difficult having him there and not knowing how much he was drinking because he could be latched on for an hour and still be drinking, and I would just, because I was so tired I would just put him down myself. So I think a part of him losing weight was due to me not feeding him properly, or feeding him enough, and then when the problems started, the sore nipples I could handle that wasn't bad at all.

Did you tell somebody about the sore nipples?

Yeah, I got the cream.

And they checked your positioning?

Yeah they checked everything, they checked the way he was latching on, and what he was doing is not opening his mouth properly when he first latched on he was sucking the tip and then sort of sucking it all in, yeah like that [laughs].

He was slurping the nipple into his mouth…

…rather than opening wide?

But when we got him to open that was fine, then he was doing everything and then.

Did the pain go away when you …?

After a while the pain never actually went away, it, every time I put him to the breast there would be pain for about ten to twenty seconds, maybe, but then it would eventually go away and we'd be okay but there was always a pain there. And then there was a different pain, it was a lot of pain and I just again thought, presumed it was my nipples so I put a lot more cream on and.

How different was that pain? Are you able to distinguish the pain of a latch on from this other pain?

It was a lot sharper; it was really sharp, like glass really.

Burning afterwards, when he came off then there was the burning, but when he, when he first went onto the breast it was like he had glass in his mouth and was biting into me.

It was awful. But I didn't want to give up because I thought, I just didn't want to give up really. And after that we, I told the health visitor, and I carried on with the cream really and they just checked the way he was positioning and the way he was latching on, and told me how to do it, which surprisingly when they were there it did help, but once they were gone it was the same thing again and every time, and then I, it put me off feeding, I didn't want to, I wasn't looking forward to feeding him, sort of dreading feeding time. But then the pain got so bad, got a lot worse that, it started going from the tip of the breast, and from the nipple all the way into my shoulder, into my arms and into my hand, so I was clenching my hand while feeding him and, that was it I thought that was it, "I can't take any more”.

How old was he at this stage?

And what was happening to his weight?


She thought that buying an expensive breast pump would make her life easier. That didn't help so...

She thought that buying an expensive breast pump would make her life easier. That didn't help so...

And this was infant formula through a bottle?

Through a bottle, yeah.

And he hadn't anything before that?

He had, no, no formula, nothing at all, but I did try expressing but the burning pain was there and it was just taking too long, it took me an hour to express about an ounce.

And were you doing that by hand or was it a pump?

Yeah. It was just too hard, too difficult and the pump it was very painful as well, that's another thing I thought buying a pump, spending so much money on it would make my life a lot easier but it wasn't at all. So that was no good, but with the milk that I collected from the breast pump I gave it to him in a bottle which he took straight away. So seeing how quick and easy it was to feed him from a bottle, it just made things worse really, so to take a break I bought some formula, well the first time I went to buy the formula, I picked it up from the shelf and I had to put it straight back down I just felt that I was betraying him, and I just couldn't go ahead with it, so I went home and I cried again [laughs], but then I finally gave up and bought some formula so I was giving him formula twice a day, just at night time and in, and during the day I think it was just to get myself a bit of break. So the pain went away and we were happy but then this little one here started getting very lazy, and because, what he was doing was he was breastfeeding but only the foremilk, so when he had to put the effort in he didn't want to, so I had to top it up with the bottle which I assumed was okay, but then his poo started going green and that's when I gave up, I thought he's not breastfeeding, he's not feeding properly from my breasts and it's not doing him any good at that point, and so we gave up and he was ten and a half weeks. I regretted it, I regretted putting him on the bottle because I thought if he hadn't been on the bottle he would've still [pause] been able to breastfeed. I felt really, really bad about it, I don't know why, I just felt as if I was letting him down.