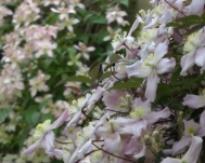 Age at interview: 44
Brief Outline: Hana was diagnosed as HIV positive in 1999 and, feels that her antenatal care, and the paediatric care her children got, was excellent. At the time of labour, her viral load was undetectable so she was able to have both her babies through normal delivery. But her obstetrician told her she would not be able to breastfeed, as the virus can be passed from mother to baby through breastmilk. Her children are HIV negative.
Background: Mother of two, separated and, until recently worked as an interpreter. Hana is looking for work that fits with her responsibilities as a single mother. Ethnic background: African.

Hana was diagnosed as HIV positive in 1999 following backache complaints. The HIV test was done by her GP, but she received neither pre nor post HIV diagnosis counselling. Her GP didn’t provide the support and information she now knows was available even then for newly diagnosed people. Hana is certain that she was infected by her boyfriend at the time but he never disclosed his diagnosis to her.

The HIV diagnosis left Hana in shock and depressed and she knew very little about the condition. She thought, for instance, that the virus can be transmitted in many ways apart from unprotected sex – like through the sharing of crockery. Because of her misconceptions and to ‘protect’ people around her, she disclosed her HIV diagnosis to all her friends, whom like Hana, had heard assumptions rather than facts about HIV. Hana was deserted by most of her friends at the time.

Eventually she has found the support and information she needs through participation in the educational and recreational activities organized by HIV charities like Body and Soul, Terence Higgins Trust and Positive Women.

Hana got engaged to her partner and disclosed her HIV status before marrying him. He did not reject her and instead, got himself tested. He was and has remained HIV negative. At that time Hana’s CD4 count was about 700 and she was not receiving treatment.

During her first pregnancy, Hana was living in a country in Africa where antenatal care to HIV positive women is very poor. She travelled to the UK to give birth, but the baby was stillborn. Hana became pregnant twice more in the UK and gave birth to two healthy, HIV negative babies.

All her antenatal care for her second and third pregnancies took place in the UK. She described her experience of antenatal care as ‘excellent’. She saw the obstetrician every three weeks and the HIV consultant once a month. At the time of her second pregnancy, Hana’s CD4 count was 350 so, below the normal starting mark for treatment. She was started on Antiretroviral therapy (ART) when she was three months pregnant. Her ART consisted of Zidovudine (AZT), Kaletra and Truvada). Hana continues taking Kaletra and Truvada

During both pregnancies and at the time of labour, Hana’s viral load was undetectable and the obstetrician gave her the option to have her babies through normal delivery, which she did. But her doctor also told her she would not be able to breastfeed as the virus can be passed from mother to baby through breastmilk. Baby formula was introduced from the very beginning. Hana’s children were regularly cared for by a paediatrician until they reached one and a half years old. Her children are HIV negative. Hana feels that her children are still too young to be told that she is HIV positive.

Hana sees a psychiatrist to help her with her depressive moods and anxiety, which she attributes not so much to her chronic illness, but to life stresses such as lack of employment and dealing with a bureaucratic and incompetent landlord. Hana is a housing association tenant and she has been waiting for months for the urgent house repairs.

Hana says that breastfeeding was not an option but that at least she was able to have normal deliveries.

Hana says that breastfeeding was not an option but that at least she was able to have normal deliveries.

Breastfeeding is not even an option, no way, because everything it come from me it goes to them. So the best thing to do from start, I have to teach them how to use a bottle so I used to have, one was for three months I used to have a problem, you know, too much milk coming out and I have to, I can’t go out even unless I have to put on plastic, under the plastic I have to put protection otherwise, otherwise I’ll be wet.

Did they give you any medication to stop the milk?

So they said, he’s going to stop by himself.

How did you feel with the breast full of milk and unable to feed the kid?

I don’t feel anything because you know what, one thing is for the protection of my kids and I’m lucky enough, at least I could give them a natural birth, you know, so what else I could ask.

I was aware of it already. When, during pregnancy time I was already, I was already been told. Just completely I have to clear it out from my mind. This is not going to happen, so I knew it. So, if it’s for the protection of my kids, then I want, I just have to feed them milk.

Hana didn’t tell friends or family the reason why she couldn’t breastfeed her children. If asked, she said her milk had dried up.

Hana didn’t tell friends or family the reason why she couldn’t breastfeed her children. If asked, she said her milk had dried up.

View topic summary
SHOW TEXT VERSION
EMBED CODE
PRINT TRANSCRIPT
I never feed my kids in front of them because you know why I don’t want all that question. I’ve been through, through, you know all that kind of things. I don’t want someone to remind me and then, and then ask me, “Why didn’t you feed them because you breast.” And I have to go in to the bedroom. It’s feeding time, I have to go. My bottle’s ready, my husband he makes a bottle. It’s ready before, you know when people are sitting and playing and talking and then that’s the time, either me or him he has to, so I have to take them in the bedroom and come back, yeah. And when my breast is dry I say to them, “No, I have to feed them bottle because I don’t have no milk no more.” That’s how I have to give some.

Okay, so people did ask?

Yeah, they ask and then my answer is always just something. I’m not going to give them, you know, why and how.
Previous Page
Next Page