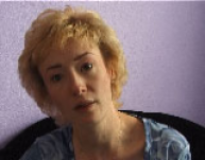 Age at interview: 34
Age at diagnosis: 30
Brief Outline: Diagnosed with breast cancer in 1997. Under went a lumpectomy and was given chemotherapy and radiotherapy.

Describes discovering a lump in her breast while she was pregnant.

Describes discovering a lump in her breast while she was pregnant.

I wasn't overly concerned about it at all as there had been a history of breast lumps in my family.

My mother had a double mastectomy in her early 30s due to several breast lumps that she'd developed which had been quite painful.

At seven-and-a-half months I went back as the lump had got bigger and was referred to my local hospital at the breast care clinic.

I had a needle biopsy taken from the breast and was called back to get the results when I was absolutely shocked to find that it was breast cancer.

All the way through we'd been very confident that I had nothing to worry about.

Explains how her husband's support and sense of humour helped them to cope better with her illness.

Explains how her husband's support and sense of humour helped them to cope better with her illness.

View topic summary
SHOW TEXT VERSION
PRINT TRANSCRIPT
It's difficult thinking' "Well what will I be like?" because obviously your main concern is I just want the cancer taken away.

I personally wouldn't have been too upset because I have a very strong healthy marriage and my husband said' "I don't care what you look like afterwards, you're still going to be you." And when my scar had healed my husband kissed my scar which was very, very important to me.

I feel my relationship with my husband is a lot stronger. He's a very caring person, was absolutely wonderful through all the treatment. Kept a very good sense of humour through it as well.

And my husband actually said to the breast care nurses when they were explaining all the treatment' "Will she be able to swim after this?" And she said' "Yes, I don't see why not." And he said' "Well that's a good job because she can't swim now."

And humour is important you know, with anything. If you can laugh through it and laugh with each other, and sometimes laugh at the illness as well then, you know, laughter is the best medicine sometimes really.

Explains that people react and cope in different and often surprising ways.

Explains that people react and cope in different and often surprising ways.

View topic summary
SHOW TEXT VERSION
PRINT TRANSCRIPT
Some of my family and friends' reactions were not what I expected.

I have a sister who's a nurse who I thought would, because she has clinical experience of it, be quite a strong person and she was very, very upset. Very weepy, very cry-y, you know.

The other sister was much stronger towards me, visibly anyway. Obviously in private people are different.

My dad found it very difficult to talk about the fact that I'd got cancer which at the time I found hard but people's reactions are different.

They have their own way of coping with it and that's something that you have to accept as well - that people cope in different ways and the way they react to you probably isn't what they actually mean to say.

It's them trying to cope on your behalf and give you support in the best way that they can.


Comments on the support group she runs for younger women affected by breast cancer.

Comments on the support group she runs for younger women affected by breast cancer.

View topic summary
SHOW TEXT VERSION
PRINT TRANSCRIPT
The group is called the Young Ones and it was formed in October 2000 by Rachel Farron who sadly has died since from a re-occurrence of inflammatory breast cancer.

And we meet once a month, we have a coffee, we have a chat. Occasionally we have guest speakers, events. We do fundraising as well obviously to cover the running costs of the group. And the events aren't just to cover the running costs they're also to raise awareness of the fact that we are there as a support group and there are other groups in the area that we work alongside that support women with breast cancer.

And the group is open to families and friends and children to come along as well. And occasionally friends of members will come.

Describes shaving her head and comments that having no hair can look beautiful.

Describes shaving her head and comments that having no hair can look beautiful.

View topic summary
SHOW TEXT VERSION
PRINT TRANSCRIPT
So I came home with the wig before I started to lose my hair.

When it did come out it came out fairly quickly and I got [my husband] to shave my hair down to very short and then we sat and shaved it off completely.

And I think a lot of people tend to wear the wigs not because they need to, because you do get used to not having your hair and it does grow back very quickly, it actually started growing back before the treatment ended.

I think you tend to wear them more for other people because you're not sure how they're going to react.


Explains that she had a lumpectomy three weeks after a caesarean birth.

Explains that she had a lumpectomy three weeks after a caesarean birth.

I had a lumpectomy, two weeks after I had [my son], I had a caesarean on 26th June and it was almost three weeks after actually that I had the lumpectomy, it was on 14th July.

Then they wanted again for me to recover from that before I started my chemotherapy and I started that in October 1997.

I managed to give him his first breast feed as well.

Although after that they gave me bromocriptine to dry the breast milk out, which is a drug that dries the milk out, because obviously they wanted the milk to dry out so that in the future they could operate on the breast.

And obviously having had a caesarean I needed to be over that before I had this further operation.

Describes how her options were explained to her both for delivery of the baby and breast surgery...

Describes how her options were explained to her both for delivery of the baby and breast surgery...

What were the treatment options that you were, that you discussed?

Obviously it was a slightly unknown factor due to the fact that I was pregnant. So what they wanted to do was get me into hospital for them to help me give birth to [my son] as soon as I could.

And again we had all the options explained with the birth as well. That they would try to induce me but I would probably have to have a caesarean because the pregnancy was quite early. And then afterwards they wanted me to have time to recover from the birth and then have the breast operated on.

On 14th July I had a lumpectomy. [My husband and] I again had discussed it quite openly and said that if I needed a mastectomy or even a double mastectomy that we were quite happy for the doctors to do that. We gave our consent for that because at the end of the day obviously you know my health and being there for [my son] in the future was the most important thing.