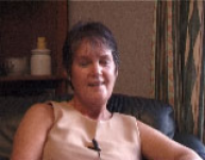 Age at interview: 52
Age at diagnosis: 48
Brief Outline: Diagnosed with inflammatory breast cancer in 1997. Was given chemotherapy, a mastectomy with reconstruction, followed by radiotherapy and Tamoxifen.

Explains that an inverted nipple alerted her to her illness.

Explains that an inverted nipple alerted her to her illness.

View topic summary
SHOW TEXT VERSION
PRINT TRANSCRIPT
I think the first time I became suspicious was I noticed that I had a lump in my breast, but I'd always had very lumpy breasts at my period times.

And the first month I just totally ignored it. I thought' "Oh, I'm just imagining things."

And I think it was half-way through the next month and I thought' "Mm, that's still there." I thought' "Well maybe I'm just about to start my period again." So I ignored it again.

And then one morning I was in the shower and I noticed that my nipple had inverted quite a bit, and I had always been told that breast cancer you would feel it as a tiny little pea-sized lump and mine definitely wasn't a tiny little pea sized lump.

But I had also been told that if the nipple changed shape in any way you should always go and get it investigated.

Explains that she asked her boss to tell colleagues about her illness, and that she received a...

Explains that she asked her boss to tell colleagues about her illness, and that she received a...

View topic summary
SHOW TEXT VERSION
PRINT TRANSCRIPT
When I went for the initial appointment and I phoned my immediate boss and I told her that it was cancer.

And she said' "What do you want me to tell everybody?"

I said' "Well tell them I've got a chest infection," and to wait until I'd been to the doctor's the second time.

So I went, I went back the next night and I phoned [name] to confirm it and she said' "Well what do you want me to do?"

I said' "Well just tell them."

I said' "There's no point in keeping it a secret because it's going to come out, I can't hide it."

And that was really touching, that brought the tears on.

"And they were marvellous, they were really, really kind, they were very good and they just didn't, they didn't treat me any differently, which was good."

And I suppose partly because I didn't, I didn't act any differently.

I just got on with life and with my work, and did whatever was necessary.

Recommends asking as many questions as necessary.

Recommends asking as many questions as necessary.

View topic summary
SHOW TEXT VERSION
PRINT TRANSCRIPT
Stay calm. Be as positive as you possibly can. Go into interviews with written questions if necessary. Think about it hard before you go into your first interview after the staging.

I'm only saying this in retrospect because I wish I had done that because I probably, if I'd sat down and thought about it, I might've had more questions. I mean I did have some.

Because if you want to know about it, the only way to do it is to ask.

Explains why she had to have two reconstructive operations.

Explains why she had to have two reconstructive operations.

View topic summary
SHOW TEXT VERSION
PRINT TRANSCRIPT
It was, it was odd because they take the tissue from your tummy and then push it up inside and reconstruct the breast which means that you have to sit, lie on the bed with your feet up, your knees up for three days. So that was a bit constricting.

But once I got out of bed I was fine, it was good. And then I think I started realising that things were not maybe as good as they should be because the breast was, looked incredibly bruised and I now know it was necrosis, but at the time I didn't know. And I must admit they did absolutely everything in their power to save it but it was just, it was just useless.

The plastic surgeon who'd helped in the TRAM flap, he did the LD flap. And the breast side of it was fine but unfortunately my back split open and I had a huge hole in my back.

So I was actually in the ward for four weeks at that time which was actually longer than I'd been there having my mastectomy. So my back was sewn back up and that was the end of that stage of the surgery. I was working very full time and looking forward to my last surgery which was planned for about the September.

And this was to get the, I was going to have a Becker, which is again a concession to me not wanting the silicone. It's a prosthesis which is put in and they fill it with saline and it stays put.

You don't have to have another operation to take that out and put, so it's a tissue-expander-come-prosthesis.

So I eventually saw [name] and he, he decided that he would expand it some more and would try and improve things. So he expanded it as much as he possibly could but he eventually had to admit yes it was in the wrong position. It had to come out.

So he had to take that out, put in a conventional tissue expander, expand me again, take that out, and put a silicone prosthesis in. So I had gone completely full circle.

I don't know whether I would do it again. Knowing me, probably yes. I would probably go for the TRAM flap again because I think it's such a marvellous idea of using your own body tissue to reconstruct something that's been taken away.

Explains that she has a positive attitude towards her illness but might consider complementary...

Explains that she has a positive attitude towards her illness but might consider complementary...

I'm a great believer in being very positive and mind over matter. I keep saying that I'm not going to be ill because I don't have time to be ill.

And I always felt that the chemotherapy was going to work and work really well and it did. I don't know where my positiveness went with the surgery but I think that was out of my hands. And I just, I just keep a positive frame of mind.

And I didn't particularly want, I'm not even, when I went to the counselling groups they used to do sort of it's like a meditation at the beginning and the end. And I couldn't visualise. I couldn't do it. I can't, I don't know whether I can't detach myself enough.

I'm a very down to earth, practical person and that's how I've treated my cancer. You know just straight down the line, and none of this nonsense.

View topic summary
SHOW TEXT VERSION
PRINT TRANSCRIPT
And I was very, very nervous on that day because I just didn't know what to expect. I didn't know whether it would hurt or if I'd be sick or what the reactions would be.

That was a very difficult time, very difficult because the Hickman line and the chemo pack, the pump, were a constant reminder. And then you looked in the mirror and that was an even bigger reminder.

So I went through a spell of being quite low. Of feeling that I couldn't escape. It was always there, you know, because you couldn't escape from the pump at all. Having a shower you had to wrap it up and put it on the side.

When you went to bed at night you had to tuck it under your pillow and you'd sometimes forget and jump out of bed and think' "Oh my God, I'm still attached." I think that probably was quite a hard time to become adjusted to that so it was actually quite good to get that over with.

Explains that information given by the oncologist was tape recorded for her to listen to at home.

Explains that information given by the oncologist was tape recorded for her to listen to at home.

View topic summary
SHOW TEXT VERSION
PRINT TRANSCRIPT
And the first person I was taken in to see was an oncologist, consultant oncologist. And he explained that I had inflammatory cancer and that what the treatment would be.

And he taped the interview and said that I could take that away with me so that, because they said' "We do accept that you're not going to take everything in and this is helpful."

So he explained that with having inflammatory cancer that they couldn't operate at that point and they'd have to do chemotherapy.

And it he said it was going to be what was called a continuous infusion, and I would have a Hickman line.

I did try to find out when I got the tape and I transcribed the tape. I then, and I also got letters from my consultant to my GP, I asked for copies of the letters.

Explains feeling unexpectedly tired as a result of having radiotherapy.

Explains feeling unexpectedly tired as a result of having radiotherapy.

View topic summary
SHOW TEXT VERSION
PRINT TRANSCRIPT
So in the January I started my radiotherapy and I had 25 doses of radiotherapy.

And that was the most devastating thing that I've had. The treatment was fine, I've got lots of tattoos all around here, little dots so they can line up the lasers, but it was absolutely shattering. I worked, I worked full time for I think it was about the first three weeks of it. I used to come to the hospital, have my radiotherapy and then go to work.

So I eventually had to give in and I had a couple of weeks off.

But it's incredible because you're just lying there and it appears as if nothing is happening and it just drains everything out of you. It's really quite astonishing. So it did, it did take mea wee while to recover from that.
Previous Page
Next Page