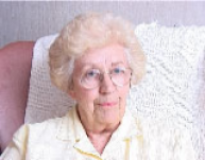 Age at interview: 71
Age at diagnosis: 43
Brief Outline: Diagnosed with breast cancer in 1973, under went a mastectomy and radiotherapy.

Comments on diet and the lower incidence of breast cancer in Japan.

Comments on diet and the lower incidence of breast cancer in Japan.

View topic summary
SHOW TEXT VERSION
PRINT TRANSCRIPT
I think lots of people have different theories but nothing has actually been proved. Only where there is a family link. And the medical profession are advising on that.

But I don't know that anyone has yet come up with anything that is really acceptable for breast cancer.

I think in other countries they don't have, for instance I believe in Japan there's a very low incidence of breast cancer. But they do have other cancers. So I think that's perhaps where there could be some link with diet but I don't know, there's nothing proven.

Describes setting up a self help group and some of the benefits.

Describes setting up a self help group and some of the benefits.

View topic summary
SHOW TEXT VERSION
PRINT TRANSCRIPT
There was little recognition of the emotional needs of the person. Little recognition of the need to share and talk things through. And I found it difficult, at that time (you've got to remember we're going back 28 years) to be able to chat to people or listen to them as I would have liked.

But that, as I say, was the system in at the time. And despite a bit of opposition I suppose at the time we did establish this group in Coventry. And it quickly became self supporting.

So that the students had done all the hard work to set it up, they'd organised the initial meetings and then we found that we could carry on on our own.

They all felt they would have recovered, particularly emotionally, from the trauma of having the, it was mostly mastectomies then, if they'd had someone to share it with and somebody who understood. And somebody who was not emotionally involved in the family.