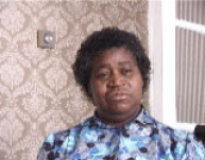 Age at interview: 57
Age at diagnosis: 54
Brief Outline: Diagnosed with Paget's disease in 1998. Under went a mastectomy and reconstruction and was given chemotherapy and radiotherapy.

Explains that you have to be positive and active about beating breast cancer.

Explains that you have to be positive and active about beating breast cancer.

So you get up every day, thank God you are living, and try to do what you have to do.

But if you are up, you're about, at least you are active. You know, you are positive. Very positive you've got to be. And you've got to do what you know you're supposed to do' eat the right food, do the right things, get your exercises. You can't go to the gym but you can still go for a walk, walk round the block and come back.

But you've got to be very positive about it.

Describes the help she received from her support group with form filling and financial concerns.

Describes the help she received from her support group with form filling and financial concerns.

View topic summary
SHOW TEXT VERSION
PRINT TRANSCRIPT
I think while you're between your diagnosis and the time you're in hospital, if you haven't been in a job long enough, you're only paid at least three months, I think it is, full pay, probably a few weeks or months half pay.

Then you have to get onto someone to help you or not. This is where Cancer Black Care was there for me because they fill out the forms. They do most of the phoning around. And they make sure that I was looked after in that way.

As I say [name] fill out my forms for me. They try and help me as best they could.

View topic summary
SHOW TEXT VERSION
PRINT TRANSCRIPT
Well, when I was told that I had Paget's disease, I was told I have to have a complete mastectomy.

Which didn't worry me because as far as I was concerned it would have got rid of the cancer.

And then the doctor said to me' "We can do you a rebuild, mastectomy and a rebuild," which, when I went down to surgery, would be done at the same time.

Anyway, it was explained to me that they were going to take the muscles out of the back of my left side and just pull it across and rebuild my bust, which together with the prosthesis would have given me actually the same size as my other breast which, as I said, I didn't have any problems with. I was quite happy with it when it was finished.

And I was told afterwards that, after they inflate the prosthesis, which is done week after week after you've had the surgery, to a certain size, that they would construct a nipple as well to go on top of the bust.

Reconstructing the nipple was about, that would take about six to eight months after the first operation. That would have taken, you had to go back to hospital as a day patient for that to be done.

Comments that she coped very well with chemotherapy.

Comments that she coped very well with chemotherapy.

View topic summary
SHOW TEXT VERSION
PRINT TRANSCRIPT
On the whole I think I coped very well because after I had the one in 99, December 99, 2000 the 5th of January I started chemo.

Which wasn't too bad because I coped with that. I didn't vomit. I didn't lose my hair.

All I did was make sure that when I go to chemo, which usually lasts about, from nine o'clock till about three, four o'clock, more or less spend the day there.

I make sure when I come back I have something to eat which I know is nourishing. And every morning I had a breakfast, midday I had a meal and in the evening I had another meal. And make sure I rebuild the cells that they destroyed. And I coped with that pretty well.