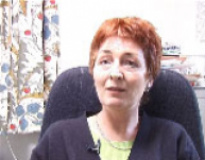 Age at interview: 43
Age at diagnosis: 43
Brief Outline: Diagnosed with breast cancer in 2001. Had a lumpectomy and was given Tamoxifen.

Describes becoming depressed as she realised she could never get back to how she was before her...

Describes becoming depressed as she realised she could never get back to how she was before her...

View topic summary
SHOW TEXT VERSION
PRINT TRANSCRIPT
I was fine I think at the beginning. I was very, I was really kind of being positive for everybody else because everybody else thought I was dying, you know.

And the cancer, [my husband] lost his mother with liver cancer and so I was saying, you know, "I'm really lucky" and "I'm fine" and, "that we found it so early" and all the rest of it. And it was only then, probably a couple of months ago, that I realised I wasn't fine.

I was, well I mean I'm taking anti-depressants now. I was really, I got really depressed. I was just really flat and irritable and not sleeping.

Then I stopped talking to [my husband] about, everything was just too much effort really.

Whereas I was always somebody who would shrug off any illness, you know. I was never sick, never ever sick. And just being confronted with your own mortality I think is a scary business.

And it does change how you feel about life really. Because you can't forget about it. And every morning I have to take this pill and you can't, I just want it all to go away and pretend it's never happened, but it has.

So I have to deal with it as best I can really.

Explains that she is slowly getting back to feeling her usual self again.

Explains that she is slowly getting back to feeling her usual self again.

I don't think it will ever, I'll ever be able to kind of have a pain somewhere and think "it's nothing" the way I used to do, or "it will go away" or, everything is much bigger than it used to be I suppose, from a heath point of view.

But I think once I can get myself back to being me, because I don't feel like I have been me. But I've started playing badminton. And I went for a job interview the other day.

So I feel like I am getting back my life a bit.

Explains her feelings of anger towards her husband and lack of interest in sex, but that their...

Explains her feelings of anger towards her husband and lack of interest in sex, but that their...

View topic summary
SHOW TEXT VERSION
PRINT TRANSCRIPT
And I was angry, I was angry with my husband. I was very angry with him because he can't deal with it if I'm not being a strong person. I've always been the strong person in the relationship and he just can't cope with it.

He shuts down, and he doesn't talk to me. He hasn't coped really. And I got angry with him and kind of locked in really for a long time.

But we are getting better now and it's, it's hard I think. I think it's harder for your partner than it is for you. Very hard. I think for [my husband] as well I know he wanted to have sex after the soreness went away. And I said to him, I just didn't feel like sex.

I don't know whether that's the tamoxifen or the depression or what it is. And that's hard for him.

But we're talking about it now and I think he knows that hopefully it won't last forever.You know it's difficult I think, very difficult.

What about the scar, how does he cope with that?

Oh yeah, I don't think that bothers him at all.

I mean this breast is bigger than my other breast now, just because it's got that kind of scar tissue underneath where they, having to operate twice makes it a bit more bumpy I think.

I'm a bit lopsided but I don't worry too much about things like that.

Comments on her concerns about tamoxifen.

Comments on her concerns about tamoxifen.

And then of course I have got side effects with hot flushes and all the rest of it.
Previous Page
Next Page