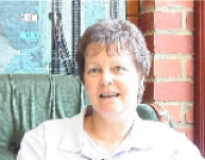 Age at interview: 47
Age at diagnosis: 43
Brief Outline: Diagnosed with breast cancer in 2001. Under went a mastectomy and was given chemotherapy and Tamoxifen.

Explains that she did not feel shock when diagnosed but wanted to talk to people she knew.

Explains that she did not feel shock when diagnosed but wanted to talk to people she knew.

Talking of books they've produced a book at the Breast Cancer Unit of women's experiences of breast cancer.

And somebody loaned me a copy and I started reading it and I couldn't relate to it at all because every single woman who had written in it their, it was all 'shock, horror' and, I just, in the end I thought am I abnormal?

Because I wasn't in that 'shock, horror', you know. Never once was I like on the floor, devastated or anything like that. But I realised that it was real but I just wasn't reacting in this 'shock, horror' way that most people anticipate.

Explains how her faith in God helped her through her illness.

Explains how her faith in God helped her through her illness.

View topic summary
SHOW TEXT VERSION
PRINT TRANSCRIPT
I am a committed Christian and I prayed about it. And I'd no sort of, I don't know, I didn't pray for healing or anything I just prayed for God's peace to get me through it. I just wanted peace.

I actually don't know how people cope with this sort of thing without a faith, whatever religion you are. I'm a committed Christian.

Things that I've read hundreds of times have just, just come out at me and the promises of God, you know' "I will never leave you or forsake you. You have a future. I have plans for you." All these sorts of things.

And it is my faith that's kept me going and the prayers of people, you know, when I go for chemotherapy, they all know when I'm going.

And I, it's almost physical, I can feel being uplifted in prayer.

Explains why she wants breast reconstruction.

Explains why she wants breast reconstruction.

View topic summary
SHOW TEXT VERSION
PRINT TRANSCRIPT
Initially it was' "Yes I will." Then it was' "No I won't," and the whole vanity thing came in, you know.  It's like' "Well I'm only doing it out of vanity."

But because I'm such an active person, I'm quite a sporty person, I just thought' "I actually don't want to have this, you know, false boob, you know, stuffed in my bra all the time."

And vanity as well obviously, because you can't wear, you've got to watch what clothes you wear. And you can't have anything too low, and even with your sleeves, you know, on a tee-shirt, you know, we've had warm weather.

I've had to go and look at tee-shirts, put them on' "Can you see the scar under my arm? Is my bra showing?" All that sort of stuff.

And I can laugh about it now but at the time it was very serious. It was very' "No. I've got this, it's got to happen," you know. So yeah, but no I'm having reconstruction surgery. I'm not going to have it until, they said there's a six month waiting list.

Discusses how she has learnt to cope with the hot sweats she experienced with tamoxifen.

Discusses how she has learnt to cope with the hot sweats she experienced with tamoxifen.

View topic summary
SHOW TEXT VERSION
PRINT TRANSCRIPT
When I came out of hospital, well no when I was in hospital, I was put on tamoxifen straight away. And all the menopausal symptoms came in.

So, for about two weeks from when I first have it until then, I'm up probably four, five times in the night. I wake up, go to the loo and just lie there and all the sweat starts popping, you know. But I've got used to it, and now I sort of, don't laugh, but it's not a grimace any more, it's like' "Oh here we go again", you know.

And again it's just something that it's going to happen. And so, you know, I just think' "Well I've got to live with this." And so when, when I do get woken up and I'm sweating I try and keep my eyes closedand just lie there and relax and not get tense because then as soon as it cools, I cool down again, I go back to sleep.

So it's not too bad.

Describes how she felt before the operation.

Describes how she felt before the operation.

View topic summary
SHOW TEXT VERSION
PRINT TRANSCRIPT
I don't think the enormity of it all hit me until then.

They came to get me from the ward, wheeled me down and as they wheeled me into the room where they knock you out, the anaesthetic room, it just hit me what was going to happen.

And I just thought' "When I wake up from this I'm only going to have one breast." And I started crying and everybody was there, the surgeon was there as well, and they were, they were absolutely marvellous. And I just said, you know' "I think it's just hit me what's going on."

And the surgeon was just amazing. He reassured me, said that everything was going to be fine. They got me out as soon as they could. There was no pain. I wasn't even aware of what they were doing, they were just absolutely amazing.

And yeah that was when it hit me really.
Previous Page
Next Page