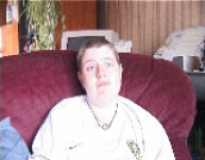 Age at interview: 19
Age at diagnosis: 18
Brief Outline: Diagnosed with breast cancer in 2000. Had a bilateral mastectomy and was given chemotherapy, radiotherapy, drugs for secondary cancer. Died in June 2001.

Describes her thoughts and feelings when diagnosed with cancer.

Describes her thoughts and feelings when diagnosed with cancer.

View topic summary
SHOW TEXT VERSION
PRINT TRANSCRIPT
The fact is I was so shocked because I wasn't expecting it whatsoever that I didn't do anything.

I just sat deadly still and I didn't know what to do. It was awful because no one was there and then they went out the room and they went into the office and they left me on my own in that little room and that's when I burst into tears.

That's when, that's when the reality hit me.

I think everybody must, you know, it's just, and you just, it was so much of a shock to me and I'm so young, I'd been so fit for so long you know. And I'm not the one in the family that's the smoker.

I do drink at the weekend but I don't drink excessively you know. I eat fairly healthily, I keep fit. So why me, what have I done, you know?

So I thought' "Well I must've been a bit of a bad 'un in my past life. "I must you know, I must've done something wrong." And I just, I wanted someone to blame really. And it's, you can't find anybody because no one's given you it, you know.

Explains that malignant lumps are rare in young women and that she was referred to hospital when...

Explains that malignant lumps are rare in young women and that she was referred to hospital when...

View topic summary
SHOW TEXT VERSION
PRINT TRANSCRIPT
I don't know, I think I'd just got out the bath or something and I did used to, you know, check my breasts and things like that, but not as regularly as I should. Not as religiously as I should. They say do it every couple of weeks so you get familiar with them.

And I found this lump and I thought' "Well what do I do about it? It's nothing. I'm only young, it can't be anything." So I went to my GP and she said basically' "It shouldn't be anything at all considering your age." I was 19 at the time. No, I was 18 at the time. Nineteen in August.

So, 18 years old, you don't expect anything like that, and I don't think anybody does. She said' "Well come back to me in 2 weeks. It could just be your hormones playing up because you're so young. You're probably just having a bit of problems."

So I went back in two weeks and it had not gone anyway so she - I think that sort of clicked something in her mind that something needed to be done. So she referred me to the breast clinic at the local hospital.

So, I got an appointment for them and I went to see the doctor there. Again, he said' "You're so young it's likely to be absolutely nothing, a little cyst that needs draining."

He said' "There's no real reason why we can give you a mammogram because they don't show up in younger people."

And I thought' "Well that's not fair, they're not doing everything they can!" So he said' "We'll do a needle test and then we'll send you for an ultrasound as well."

Describes reassuring her mother who felt that she, not her daughter, ought to have developed...

Describes reassuring her mother who felt that she, not her daughter, ought to have developed...

And I think it was a feeling of guilt more than anything from being away. And she felt like she wasn't there for me.

And I think she also thought that if it was something to do with genetics, she should be the next in line for it, because my grandma had had it, my great grandma had had it, so it was obvious that it was her turn and it seems like it's skipped a generation.

So she felt it should've been her. And I said to her' "Look, you can't say that because we're not even sure it's through the genes that I've got this.

We don't know, there's no one to blame, and I'm certainly sure that I'll never blame anybody because it's nobody's fault. There's nothing you can do it about it. If it happens, you just have to deal with it.

So I think that put her mind at rest a bit.

Describes the very different responses she got from friends when she told them about her diagnosis.

Describes the very different responses she got from friends when she told them about her diagnosis.

View topic summary
SHOW TEXT VERSION
PRINT TRANSCRIPT
And then came the task of ringing round and telling all my friends.

I think I'd come to terms with it so much so that it sounded like a script that I was just reeling off after a while.

There was no emotion there when I was saying it, and I tried to detach myself from that because otherwise I'd make them distraught on the phone as well.

And so they were all, you know, a few of my friends were really' "Oh I'm coming to see you right now, I'm setting off now, I need to see you," you know, really supportive.

And I think that's through dealing with things differently because some friends heard it over the phone and said' "Right I've got to go, my tea's ready, the oven's beeping, you know, see you, bye."

And it was, that sort of, it made me feel a bit upset but I understood that they didn't want to be upset and make me upset on the phone. So it was, they were only thinking of me anyway.

And I had so many cards and so many phone calls.

She describes changes in her preferences for taste and smells during chemotherapy (cisplatin).

She describes changes in her preferences for taste and smells during chemotherapy (cisplatin).

View topic summary
SHOW TEXT VERSION
PRINT TRANSCRIPT
The worst part of it, I mean everybody says how bad hospital food is and yeah it is, it's terrible, but when you're on chemo you don't want to eat anything - whether it be good or bad.

So my diet went completely down hill.

And then, after a while, I started getting that metal taste that they warned me about, in my mouth. And you couldn't make it go away. It tasted like you'd been sucking like a stainless steel spoon. All day your mouth was dry. You wanted a drink but if you had a drink it made you feel sick because of the taste or the smell.

The anti-sickness were working until I got a whiff of something. And then the hospital food used to come in like a metal tray. The sight of the tray made me feel sick and then when you take the top off, the smell sort of suddenly comes out. And the only thing I could eat after a while was citrus fruit.