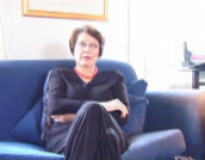 Describes the discovery at a follow-up appointment of pre-cancerous changes in the previously...

Describes the discovery at a follow-up appointment of pre-cancerous changes in the previously...

SHOW TEXT VERSION
PRINT TRANSCRIPT
And we came into the autumn and I had my first mammogram. And this was just before Christmas, and they found some irregular cells, calcifications. And they said I'd have to have a biopsy. And I really felt terribly undermined.

I was going on holiday for three-and-a-half weeks and I said that I'd have to have it before. So on the 22nd of December I had a biopsy, rather a painful one, which it hadn't been before and I don't know why it was but - And when I returned from holiday I was told that I had a pre-cancer on the other side. Very small.

And I was devastated. I couldn't believe with the chemotherapy, with the Tamoxifen which I had been put on, that another cancer could get through it. It felt as if my last defence was down.

And I asked for an explanation of this and they said' "Well this is a very slow moving cancer, it's a pre-cancer really and it's a primary, not a secondary. It doesn't mean that it's travelled into your body. It means that another spontaneously erupting cancer has come on the other side, it's very small. If you hadn't had the cancer that you, the invasive cancer before, we might not even have done a lumpectomy and we certainly wouldn't have done any radiotherapy. It might've cleared up itself."

Explains that since her recovery she has wanted to devote more time to personal and family...

Explains that since her recovery she has wanted to devote more time to personal and family...

View topic summary
SHOW TEXT VERSION
PRINT TRANSCRIPT
I thought of, really living to the age of my mother. I never thought that I would die young in a way unless by accident or something like that.

I think of it is as nearer than further away now.

I think at my age you begin to think in any case about the end of your life. I think that's natural with any sort of middle aged people. You know, you're coming to the end of your career.

You're coming to the end of, your children are growing up and leaving home and having their own families and you're not the centre of attention any more.

Death is in the picture really. Death is there in the picture and maybe that's not a bad thing. And it makes me want to plunge into life and be with people. And I think I actually get on with people better than I did before, strangely enough. And it's not something I tried to do.

There was just a need there and that has been one of the pluses that came out of it. I feel quite emotional when I'm talking about it because actually it was sort of like a gift that I hadn't expected from this dreadful situation.

At the same time I feel that the grief and sorrow has deepened my life. And I think that that, together with this wish to be with people and, I just absolutely love if someone asks me out to dinner.

Explains how her children seemed angry with her being ill and hadn't found a way to talk to her...

Explains how her children seemed angry with her being ill and hadn't found a way to talk to her...

View topic summary
HIDE TEXT
PRINT TRANSCRIPT
Well they have been - I'm trying to think, I can't think of any one way I'll just have to say about specifics - deeply affected.

But very angry as well, angry that I'm not as I was, terribly angry.

And I think that that was the most difficult bit to cope with is their anger, simply because they couldn't believe it and they wanted me terribly to be well.

My son was very supportive but somehow, he's also doing his A levels, so it was really not a good time for him to be told that, he was absolutely devastated, he burst into tears when he heard and I think he's actually been more aggressive since, as if he's had to defend himself with the aggression.

I don't know whether it's worse for other people in a way I think when you've got cancer yourself you, I feel that you are thinking about it and working with it all the time but they're not.

And so the children they're a worry.

Wants people to know how important it is that friends keep in touch.

Wants people to know how important it is that friends keep in touch.

View topic summary
SHOW TEXT VERSION
PRINT TRANSCRIPT
There are certain things that I think people ought to know, people who haven't got cancer, is that you do want people to be interested.

You do want people to ask you out.

It's just so nice for people to contact you when you've got this illness.

It makes you feel that you're wanted, you're liked, your life matters.

They want you to live on.

Describes her experience of homeopathic therapies.

Describes her experience of homeopathic therapies.

View topic summary
SHOW TEXT VERSION
PRINT TRANSCRIPT
I have Tamoxifen, but I also go to the homeopathic hospital and I have several things. And I've found that they have been very helpful.

Some of their, I don't know whether they call them potions or medications or whatever, have been extremely helpful. Some didn't seem to have any effect, but there was two that I've had that really were magical for the sickness. They helped me more for the sickness, and, I think for feeling states too they were helpful.

And they have a very, I mean I see someone very nice there, a lovely doctor. And I'm glad to see her because there is such a lot of grief involved in cancer and she gave me a medication for grief and sorrow.

That I don't know whether it was sort of this nice young doctor, because she's a particularly sensitive woman, and her coming up, she picked up my grief and sorrow at having this illness and had responded.

And that was helpful.


Describes her weight gain and tiredness during chemotherapy.

Describes her weight gain and tiredness during chemotherapy.

View topic summary
SHOW TEXT VERSION
PRINT TRANSCRIPT
I thought that I wouldn't want to eat during this time but I found that I was very hungry, I don't know whether it was something to do with combating this sickness but I was always hungry.

And of course with the steroids, anti-sickness, I was putting on weight, which didn't help me to feel good about myself.

And literally I could hardly get down, just down the road to the Post Office and back, before I had to come back and lie down.

Comments on the cold cap and losing her hair.

Comments on the cold cap and losing her hair.

It's painful for the first ten minutes and then it acclimatises to your head temperature and they have to change it every, I think twice, throughout the two hours that you're having this chemotherapy.

And my hair, despite the cap, was thinning and I had two areas of about an inch round the ears where it's not close to, where the cap doesn't, well it's sort of pushed out by the ears.

So I had bald bits there and there, and I used to have to pull the hair down over it.

And my hairline receded and you just begin to look very different - no eyebrows, no eyelashes.

And I was fatter, so it really, that was quite devastating.

You felt your femininity was coming out with the sickness really.