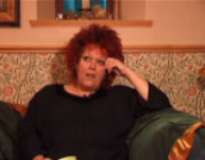 Age at interview: 51
Age at diagnosis: 48
Brief Outline: Diagnosed with breast cancer 1998, Ductal Carcinoma in-situ (DCIS). Had a lumpectomy and was given chemotherapy and radiotherapy.

Describes her sense of sistership with other breast cancer patients.

Describes her sense of sistership with other breast cancer patients.

View topic summary
SHOW TEXT VERSION
PRINT TRANSCRIPT
I've found a lot of support from other women. I found there are an awful lot of brave and quite wonderful women out there. Actually I think breast cancer does help you develop, and it might be a funny thing to say but, a great feeling of sistership with other women.

You know there's such a good feeling between women who've had or got breast cancer, and you can all relate to each other and it's, you look out for each other. And that's really, really nice.

You know, I'll go and meet somebody who I know who's had breast cancer' "Are you alright?"

"I'm fine. Are you alright?", "Yeah." "When are you going again?", "Oh I've got to go- - -" You know and it's, it's a real comradeship, which is nice. It's lovely, an affinity. Not brought about by something very nice but it's still an affinity.

Explains why she is wary of complementary approaches.

Explains why she is wary of complementary approaches.

View topic summary
SHOW TEXT VERSION
PRINT TRANSCRIPT
My sister went into that very, very deeply. I actually felt as though she was ripped off by quite a lot of people. Maybe she didn't go to the right ones but she did try quite a lot of things yeah.

You mean they promised results that didn't happen?

She was charged so much for things.

And they didn't do any good. She was due to go to the [name] Hospital on the day she died. I think that probably would've helped her tremendously because it's not just treatment it's your own well-being as well. Your own thoughts, and your quality of life, and anything that helps you and I think it should do.

You should go for it. If you believe that eating leaves off yew trees are going to help you then do it.

You've not tried anything yourself though as yet?

Would prefer to be on tamoxifen even though tests suggest it would probably make little...

Would prefer to be on tamoxifen even though tests suggest it would probably make little...

View topic summary
SHOW TEXT VERSION
PRINT TRANSCRIPT
You said you wanted to go on tamoxifen because you haven't been prescribed it? Why do you feel so strongly about that?

Because I'll grab anything that's going [laughs]. I think if it's borderline then I should have been put on it. I'm going to find out why, properly, next week, why I wasn't put on it and see if they'll put me on it. I think if there's any doubt about it they should've done it in the first place. And I also think it's like a prop, you know, it's something that you probably think is helping you. So it's psychological as well.

Because there's no other treatment now for you to have?

Yes. In fact I know somebody who's been on it for ten years and she nearly cracked up when she was taken off it because she said it's like an insurity. So, yeah I suppose because it's the only other treatment available, then yes.

Comments on feeling unsupported following the end of treatment.

Comments on feeling unsupported following the end of treatment.

View topic summary
SHOW TEXT VERSION
PRINT TRANSCRIPT
In fact the other thing I think that, once you've finished your treatment you're just left. Okay, so you've got a breast care nurse you can contact if you want to, but she's busy, she's got other more important things to do.

You just feel as though, that you're just dumped basically, you know?

"That's it. Treatment's over. Finished, done with. Off you go. See you in four months." And it's a bit scary. Especially when you've got things like' "Oh God, that pain," you know? "Is that normal?"

I guess that's what support groups are for.