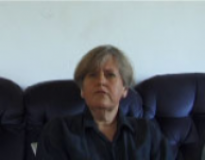 Age at interview: 56
Age at diagnosis: 53
Brief Outline: Diagnosed with breast cancer in 1998. Had a lumpectomy and was given chemotherapy, radiotherapy, Tamoxifen, Arimidex and drugs for secondary cancer.
Background:

Describes the symptoms that lead to the discovery that the cancer had spread to her bones.

Describes the symptoms that lead to the discovery that the cancer had spread to her bones.

View topic summary
SHOW TEXT VERSION
PRINT TRANSCRIPT
And out of the blue I started to have aches and pains all over the place, really peculiar, across my shoulders, down my arms, legs, it was odd and it sort of settled down in the end after about a month, and I had pains in the tops of my legs.

So I had a bone scan, a chest x-ray and a liver ultrasound all on one day.

And the other tests, the results were there ready when we went back to the oncology department for this appointment a month later, and they told me that I had cancer in the bones, it was in the lower spine, the pelvis and the tops of both of my legs.

I think that was quite a shock, I don't know what I thought it was, I suppose I didn't think it was anything, I didn't really know at all what I was expecting.

However I am on some medication which they say will contain and control it, and I do actually feel that that's working.

Describes her uncertainties about the future after a diagnosis of secondary cancer.

Describes her uncertainties about the future after a diagnosis of secondary cancer.

I've got another appointment at the hospital in another month's time just for a check-up to see how things are going.

The cancer that I've got in the bones is incurable.

You can understand that in a way because it's there, it's, they say it's going to be controlled and contained, but nobody will actually tell me, and I think that that's because they don't know, whether I'm going to be back to walking absolutely normally, or whether this is ultimately going to be a further problem and it's going to kill me.

I feel quite positive in some ways, because I do think that this Arimidex is definitely affecting me. I can feel in myself that it's easier, I'm walking easier, getting out of a chair much more easily, all sorts of things within myself.

It's all, everybody is different, it's not like an engine where you just take a cog out and put one back in, is it? It's all very different.

So, I am concerned, I feel well but I don't know what's going to happen.

View topic summary
SHOW TEXT VERSION
PRINT TRANSCRIPT
The actual clinic that the chemotherapy was given to the patients is quite nicely laid out, they've tried to make it comfortable and nice curtains and furnishings so that it doesn't seem so clinically cold, you feel a little bit more relaxed as though you're in somebody's sitting room.

Anyway when we came to the first dose it was not very pleasant.

They put a needle in the back of my hand, connected it to a saline drip and then about 6 inches down the tube there was a little junction and into that they injected 5 different chemicals.

They arrived at my side with this tray with 5 huge syringes on, so I just sat with my arm out one side and looked in the other direction so that I couldn't see it.

I also had some anti sickness tablets to take and I took them very religiously to begin with but after two or three sessions I sort of gave up because I really had no side effects in that respect at all.


Comments on giving up HRT and taking tamoxifen.

Comments on giving up HRT and taking tamoxifen.

View topic summary
SHOW TEXT VERSION
PRINT TRANSCRIPT
So after that I went onto tamoxifen.

I think it was a few weeks after the end of the radiotherapy, and they had explained that when I was in the hospital that almost certainly they would give me tamoxifen, and it's usually anticipated that you'll have it for a period of about 5 years.

The main side effects of tamoxifen are apparently menopausal symptoms.

I've been on HRT because I had very bad hot flushes, so when I was diagnosed with breast cancer I had to come straight off the HRT, then I took the tamoxifen and so I had a recurrence of all of the hot flushes, that was the worst thing that I had to deal with, I didn't really have anything else that worried me but I used to wear, I was wearing summer clothes really all the year round.

Comments on the support given by hospital staff and how friendships developed with other patients.

Comments on the support given by hospital staff and how friendships developed with other patients.

View topic summary
SHOW TEXT VERSION
PRINT TRANSCRIPT
The ward was wonderful. It was a ward that was especially allocated to people with the same problem.

A number of the patients in the ward had pre-cancerous cells and they came in on the Monday early, starving, had the op and went out the next day.

But there was a small group of us, I think there were six, one lady kept very much to herself but five of us kept, became very close friends and we have kept in touch since.

Everybody in the ward was just wonderful, the nurses and the staff they were supportive and kind and they encouraged us to become friends and to look after one another.

Explains that she was able to work throughout her treatment.

Explains that she was able to work throughout her treatment.

View topic summary
SHOW TEXT VERSION
PRINT TRANSCRIPT
We were approaching Christmas, so they didn't start the radiotherapy until straight after Christmas.

That was no problem to me at all, I didn't have any side-effects, I actually asked for the last appointment every day, I went to work, left half way through the afternoon, drove up to the hospital, had the dose of radiotherapy and went home.

But I didn't feel, otherwise I didn't feel any side-effects, I, the hospital were efficient, I didn't ever wait very long.

As I said I was the last appointment so, even though it was the end of the day they weren't usually running late and I had no problems in driving to and from on my own. I managed that really well.

I think that I had about 16 doses of radiotherapy, they were scheduled for 3 a week, and then right at the end I had a shot of what they called a booster.