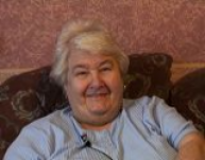 Age at interview: 70
Brief Outline: Screened for bowel cancer in 2006, when aged 70. The result of the Faecal Occult Blood (FOB) test was abnormal, so she had a colonoscopy, during which some benign polyps were removed.
Background: A white English woman, a retired home help, now a volunteer, widow, with 4 children.

She was screened for bowel cancer in 2006, when aged 70. The result of the first Faecal Occult Blood (FOB) test was unclear, so she repeated the test. This was abnormal, so she had a colonoscopy, during which some benign (non-cancerous) polyps were removed. She will have another colonoscopy in three years time, just to make sure that everything is normal.

Suggests that you read the instructions before opening the test kit.

Suggests that you read the instructions before opening the test kit.

View topic summary
SHOW TEXT VERSION
PRINT TRANSCRIPT
What did you think of the little leaflet with the information, with the test kit?

It was, it was very good and as I say I just made my own mind up how I was going to do it but it was very good, it told you what to do and everything as regards that. And when you see the, when you see the, the kit before you read the book and you just open it and you see the kit you think, 'Oh my God'. And you, it's difficult, but reading the booklet after, and going through, and then you know what you've got to do then, then everything comes into perspective. But just opening up and seeing them whatsername you don't know what to expect [laughs].

How, would you have made the information different in any way?

Well no, not really, because I mean by rights you should read the leaflet before you look at the kit.

She needed special blood tests before her colonoscopy because she had only one kidney and diabetes.

She needed special blood tests before her colonoscopy because she had only one kidney and diabetes.

View topic summary
SHOW TEXT VERSION
PRINT TRANSCRIPT
Did you look for information anywhere else about it at that stage?

Er no because I knew I was going up to the clinic.

And they was going to explain. I'd only waited, I think I waited about a week before me appointment come through for the clinic and they explained.

Worried, I was worried. And I thought, 'Well the only thing to do is get it all sorted out and get it done'. And when I went up to the clinic the nurses explained everything and they went through everything in detail. You'd got to give all your medical and everything so that they knew exactly what you'd, what they could do for you. And of course with me only having one kidney and having diabetes I had to have blood tests and I had to have a, test me kidney and test me diabetes. So that was alright. And then that come back and as soon as that come back alright they turned round and says, 'Right you can', and within a week I was having the colonoscopy done.

...Polyp or anything you know they can get rid of them, they'll scrape them out and it's up to, you've got the decision whether you want to take it or not.

Did they explain any disadvantages or risks?

Well they said the disadvantage was that while they were scraping at the, scraping the polyp off there could be a tear or while the camera was going up if you was, if it was if the camera caught you could have a tear and they'd have to repair it and everything.

You'd probably have to have a slight operation, have to repair it. But thinking that way you'd sooner have that done and know that you were safe than not have it done at all.

So you decided to have the colonoscopy?

She was allowed to take medicine for her angina but was told not to take aspirin before her...

She was allowed to take medicine for her angina but was told not to take aspirin before her...

View topic summary
SHOW TEXT VERSION
PRINT TRANSCRIPT
Did the nurse at the clinic give you the special medicine to prepare for the colonoscopy?

And did you have to have special instructions because of your diabetes?

No, I asked about me, whether I could take me, because the medication that I was on for my heart and me whatsername.

No for my heart.

So you couldn't take aspirin but you take, I could take my other tablets what I'd got to take.

Did you have to adjust what you had to take for the diabetes because you weren't eating?

I'm only on diet controlled diabetes.

So I haven't got any tablets, it's my heart and my blood pressure tablets.

So they turned round and said well I could take them, no problem.

Everything except the aspirin.

Did they explain why you shouldn't take the aspirin?