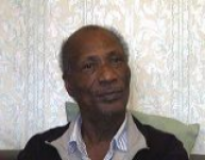 Age at interview: 65
Brief Outline: He was invited to be screened for bowel cancer in 2006 when aged 65. The first Faecal Occult Blood (FOB) test was unclear so he repeated it. This was abnormal so he had a colonoscopy. Two benign polyps were removed.
Background: A black Jamaican man, a retired factory worker, married, with 7 children.

He was invited to be screened for bowel cancer in 2006 when aged 65. The first Faecal Occult Blood (FOB) test was unclear so he repeated the test. This was found to be abnormal, so he was offered a colonoscopy. During the colonoscopy two benign (non-cancerous) polyps were removed. He will return for further checks in three years time.

Doing the Faecal Occult Blood test was as easy as ABC.

Doing the Faecal Occult Blood test was as easy as ABC.

You mean the test for'?

When the test kit came in the post to do at home.

Yeah it's just easy, you know.

Did you have to put a little bit of your bowel motion onto the card?

Yes onto, you know and seal it, easy.

It was quite easy?

And was it quite clear how much of the bowel motion you had to put on the card?

And then what did you have to do with it after that?

You seal it you know and the, the thing that was, you put it into a disposal?

Yeah, you know, and then you wash your hands, that's right.

The doctor removed two polyps during the colonoscopy. It wasn't painful.

The doctor removed two polyps during the colonoscopy. It wasn't painful.

View topic summary
SHOW TEXT VERSION
PRINT TRANSCRIPT
Well after I get undressed you know I got you know a gown, you know that?

Yes you know lying down you know. And when I went in, I've been placed on a bed, you know there was two nurses and they were ever so nice you know. And then the doctor gave me this injection, you know help me to relax.

Relaxed, you know I can see everything you know that took place you know on the television, you know what I mean?

Could you see that?

What did you think of that?

What could you see exactly?

Yeah all my, you know all my system, inside works you know yeah.

Good and what did they find?

They found what you call it, two.

He rested for an hour after the colonoscopy. Then the hospital staff arranged an ambulance to...

He rested for an hour after the colonoscopy. Then the hospital staff arranged an ambulance to...

View topic summary
SHOW TEXT VERSION
PRINT TRANSCRIPT
Yeah and they put me back out you know in the hall, you know what I mean, I was just lay there on the bed.

They took you into the waiting area?

Yes, for about an hour and then they give me a cup of tea and a sandwich, yes. Oh they was ever so nice, honestly.

Did you have any side effects of the colonoscopy?

No, no, no none whatsoever.

Do you mean from the hospital?

Oh good so there was no problem with that?