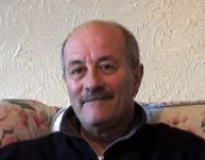 Age at interview: 61
Brief Outline: Invited to be screened for bowel cancer in 2006, when aged 61. His Faecal Occult Blood (FOB) test was abnormal, so he had a colonoscopy. Nothing abnormal was found during the procedure.
Background: A white English man, a retired railway parcels supervisor, widower, with 2 children.

He was invited to be screened for bowel cancer in 2006, when aged 61. His Faecal Occult Blood (FOB) test was abnormal, so he repeated the test. Blood was also found in the repeated test, so he was invited to have a colonoscopy, but nothing abnormal was found during the procedure. He thinks he will be sent another test kit in two years time.

The nurse was very helpful, went through everything and told him he could have a colonoscopy the...

The nurse was very helpful, went through everything and told him he could have a colonoscopy the...

View topic summary
SHOW TEXT VERSION
EMBED CODE
PRINT TRANSCRIPT
Can you say exactly what happened when you talked to the nurses there?

Yeah, I saw one of the nurses and she explained to me what had happened with the samples I'd sent off and that there was some, they'd found were positive. I did ask how much blood there was and she said it was very, very minimal but I had; far safer to be tested than, or to have a colonoscopy which I hadn't heard of. I had known about it because my father's had one but I didn't know the name of it. And she went through everything, we were there about 3/4s of an hour, I think we overran. She was very, very helpful, she explained that well she, she told me that I could have the test the following week and that once again worried me a little bit because it's all so quick. But with hindsight it's better to be quick and get it over with than hang around for weeks and things get worse.

Did she explain that there was always a tiny risk with any procedure like that?

Yes, yes she explained to me that it's possible that by having the colonoscopy it could aggravate certain things. I didn't really understand it but I knew what she meant.

And it was worth the risk.

You felt you had a choice though whether you took part or not?

After the colonoscopy he had pain in the area of his colon and later diarrhoea.

After the colonoscopy he had pain in the area of his colon and later diarrhoea.

View topic summary
SHOW TEXT VERSION
EMBED CODE
PRINT TRANSCRIPT
You said you had some side effects after the colonoscopy can you tell me about those?

I'm assuming it's to do with the colonoscopy because the nurse actually phoned me up on, the next day I think it was and asked me how I was feeling and I had some violent pains at the base of my stomach, or perhaps the colon area and it was, there was a lot of wind, there was a hell of a lot of wind and I assume, they had told me beforehand that, because they pump some air into you I think to open the bowel up and I can only assume that I hadn't passed it. About the Wednesday after, I mean I've not told the hospital this but I then [laughs] had the effects of the, it felt like the effects of the laxative because my, I was in and out of the toilet for two days and I'm wondering whether I still had some inside me but I don't know how. That was just my own thoughts but that as the only after effect I had.

So you had even more diarrhoea for a while afterwards.

Yeah afterwards, straight afterwards I was alright, I, I was back to normal basically for a couple of days and then I had these, I woke in the middle, early hours of the morning and I had really, my stomach was hurting and I had, there was a lot of wind, there was, and it hurt. And for a few days my back passage felt slightly sore, it was, it's obvious something had happened in that area but after a couple of days that all wore off, I never went to the doctors. If it had lasted a bit longer I might have done but I just assumed it was an after effect.

He found it interesting to watch the colonoscopy on the TV screen. He felt nothing as the...

He found it interesting to watch the colonoscopy on the TV screen. He felt nothing as the...

View topic summary
SHOW TEXT VERSION
EMBED CODE
PRINT TRANSCRIPT
During the colonoscopy, do you remember whether you saw what was going on the television screen?

Yes, the doctor said to me that if I watched, I think it was the bottom right I would see the instrument he used, appear. And I did and it, actually you could watch it go through your body. I was pretty much relaxed so I think I remember the beginning and more or less the end but I could see this, the instrument going through and I can remember at one point I asked what that was, I could see a dark thing and he just said, 'Don't worry about that, that's a piece of poo.' So [laugh] the laxative hadn't 100% worked but it was interested watching it, but as I say I can't remember everything about it, I was that relaxed.

So could you see the little camera whatever it is.

Yes that's the word I was thinking of, it's like a small instrument going through looking and you could see your insides basically.

And while that was happening did that hurt at all?

Oh that's good. And then?

I didn't even feel, to be honest when it went, when the put it in my back passage I never, I think, I can vaguely remember just feeling something but it didn't hurt.