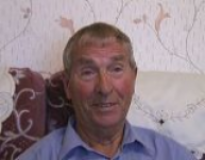 Age at interview: 70
Brief Outline: Invited for screening in 2006, when aged 69. The Faecal Occult Blood (FOB) test was abnormal. This led to a colonoscopy, a biopsy, and then another colonoscopy and the removal of benign polyps.
Background: A white English man, a retired lorry driver, married with 2 children.

Invited for screening for bowel cancer in July 2006, when aged 69. The Faecal Occult Blood (FOB) test was abnormal, so he was asked to repeat the test. This repeat test was also abnormal, so he had a colonoscopy a week later, when two polyps were found in the bowel. These polyps were sent for biopsy and found to be benign (not cancerous). A week later he had another colonoscopy so that the polyps could be removed. At that time two more polyps were found. These were also removed.

Having a colonoscopy was easier than having a tooth out.

Having a colonoscopy was easier than having a tooth out.

How were you feeling at that point?

So the actual procedure isn't too uncomfortable then?

No, no there's nothing to worry about at all. You know it's, it's in the mind at first I think, you know it's, but it's, it is actually easier going, it's easier than going to the dentist and having a tooth out or a tooth filled, it's easier.

His family history of bowel cancer and his GP persuaded him to take part. He also wanted to live...

His family history of bowel cancer and his GP persuaded him to take part. He also wanted to live...

View topic summary
SHOW TEXT VERSION
EMBED CODE
PRINT TRANSCRIPT
Okay. Were there any other factors that affected your decision whether or not to accept the screening, you said your brother who'd died of bowel cancer sadly, was that 18 months ago did you say?

About, about 18 months ago yes.

So that influenced you?

Did you discuss your decision with anybody else apart from your wife?

So you had two brothers with bowel problems.

Yes and I had a talk with my brother like you know. I went, I told the doctor, I went to see my doctor you know because I get headaches occasionally and I keep going getting a check on the headaches. And I told my doctor what, as I had, had this invitation for these tests and he says, 'Go ahead with them and take them,' he says. He says, 'My advice is you take them'.

So did that influence you as well his advice?

Yes, yes because he was quite positive about it the doctor is you know he said, 'It's there for you,' he says 'take it,' you know. He says because it was a big killer in the country he said, 'So take it and check yourself, get yourself checked out'.

He noticed a trace of blood in his stools after his colonoscopy but this cleared up almost...

He noticed a trace of blood in his stools after his colonoscopy but this cleared up almost...

A very, very, very small amount. The, after I'd eaten, I had some egg and bacon and I sat down, played, listening to the radio and I felt hungry again, so my wife did me some boiled eggs and ham sandwiches. So I ate, I ate those and I was drinking tea all the time and you know water, tea all the time, I was drinking water and tea all the while and I felt fine. But when I did my first stool at the toilet there was just a small trace, which they told me there would be, you know. But they said if it was too much to get back in touch with them right way. But there was no problem, it cleared up almost immediately.

The doctor explained that he had removed some polyps and had sent them to the laboratory for...

The doctor explained that he had removed some polyps and had sent them to the laboratory for...

View topic summary
SHOW TEXT VERSION
EMBED CODE
PRINT TRANSCRIPT
And they asked me if I wanted anything to eat, wanted anything to drink and I said, 'No thank you,' I says, 'I feel fine,' I says, 'I'm just waiting to go home now.' And they says, 'You can't go home yet because the doctor wants to come and talk to you, you know.' So I had to go, get dressed, then I had to go into another private room and the doctor came in to see me, and that's when he explained everything what he'd found and what was going to happen next you know they was going to send, took parts away and they was going for test and he told me what he was going to do if they were diseased, told me exactly what he would do and he told me exactly what he would do if there wasn't disease. And that's when I went the week afterwards to see the nurses again and they, they told me then that everything was fine and he was going to take the polyps away. And they said, 'Can you come in again Tuesday?'

Tissue samples from his polyps were found to be benign (non-cancerous). He needed another...

Tissue samples from his polyps were found to be benign (non-cancerous). He needed another...

And he went away with the examination and he found, he found a large polyp on the bend of the bowel and he found a small one underneath. So he told me he'd taken some [tissue samples] away for examination and I would have to go back again to see what the tests were. So I went back again to see the nurses at the centre and they told me it was benign and that he was going to take the polyps away. So I had to go back again the next Tuesday and I had to have the polyps taken away.

He told me the one polyp, which was a large one they were, he said he was going to get behind it. He said it was very awkward to get at and he'd got to get behind it he said with a loop and he said he was going to take it away with a loop. What a loop is I don't know, I've never seen a loop but I should imagine it's like a lasso, you know, the end and they just put it on, cut, and take it away. I should imagine that is the, what they do.

And how did that feel?

Did you watch the polyp being removed on the screen?

So they removed one polyp or more than one?

They removed two, there was, there was two polyps, there was a large one on the bend of the bowel and there was another one below it, which as I've told you was being taken away from tests. So he removed the two and he decided to have another further investigation while you know, the situation was good for it. So he had another examination around the bowel and then he found two, another two small polyps at the base of the bowel. And he took, he took them away you know with, because he said in the first place, in his experience and what he could see, there was no disease, this is what he told me all along. He said, “As far as the naked eye is concerned there's no disease.” So he decided to take these two small ones away and send them away for tests. And they was benign as well.